Feature Image by: Marianne Purdie for ‘This is Australia’, Getty Images contributor

Marianne Purdie: Anything but Retiring

Marianne Purdie had seen photos of star trails at a very young age and was captivated. It only seemed fitting when we caught up with her, she’d just landed in Melbourne from Brisbane – and was on her way to Bendigo to photograph stars and galaxies. She laughs easily and is obviously having the time of her (semi) retired life.

One glance at her folio, however, reveals an artist who is anything but retiring. The images are bold, richly detailed and portray a diverse array of subjects. Her journey is far from over. Box Brownies and Instamatics led to her first Canon 300D, participation in the Canon Collective and now the Canon and Getty Images ‘This is Australia’ program.

What does your photography mean to you?

Unfortunately, I had to give photography away very early on. I started again seriously in 2000 and now it’s an obsession. The development of the digital camera was a life-changing event. I particularly loved not having to bring rolls of film home from my travels and then wait until I could afford to develop the mountains of rolls I had. And I got to fulfill one of my childhood dreams – I learnt how to photograph star trails.

I’ve climbed volcanoes to watch the eruptions. I’ve had lava bombs fly over my head. I’ve snorkeled with whales. I’ve slipped down rocks, holding my camera high, while photographing waterfalls… Photography has taken me places I would never have gone and given me memories I’ll never forget.

That was a few years ago, on the road between Mt Isa and Alpurrurulam, an Aboriginal community in the Northern Territory. I had some friends who taught TAFE and I did some volunteer work in the communities. I’ve also worked with disadvantaged children, mostly from lower socio-economic groups, many with really challenging backgrounds. It was very challenging, but extremely satisfying when you are able to make a difference to their lives. I’m retired now but still do some casual work.

So retirement keeps you busy?

My world changed when I picked up my first Canon. My earliest experience was a workshop with Darren Jew, an underwater photography workshop – and then I went with him on a ‘Snorkelling with the Whales’ trip to Tonga. While we were there, he mentioned a trip to Lady Elliot Island he was hosting in conjunction with the Canon Collective and I’ve since attended over a hundred Canon workshops. I’ve been with them to Croatia, Namibia – I’m about to join them on a road trip to Central Queensland and then the European Winter Wonderland Tour.

Plenty of wonderful experiences. I once had an elephant seal charge me on South Georgia Island. Over 2000 kilograms charging at me. Three people joined me and we all started roaring at it – it soon backed off! 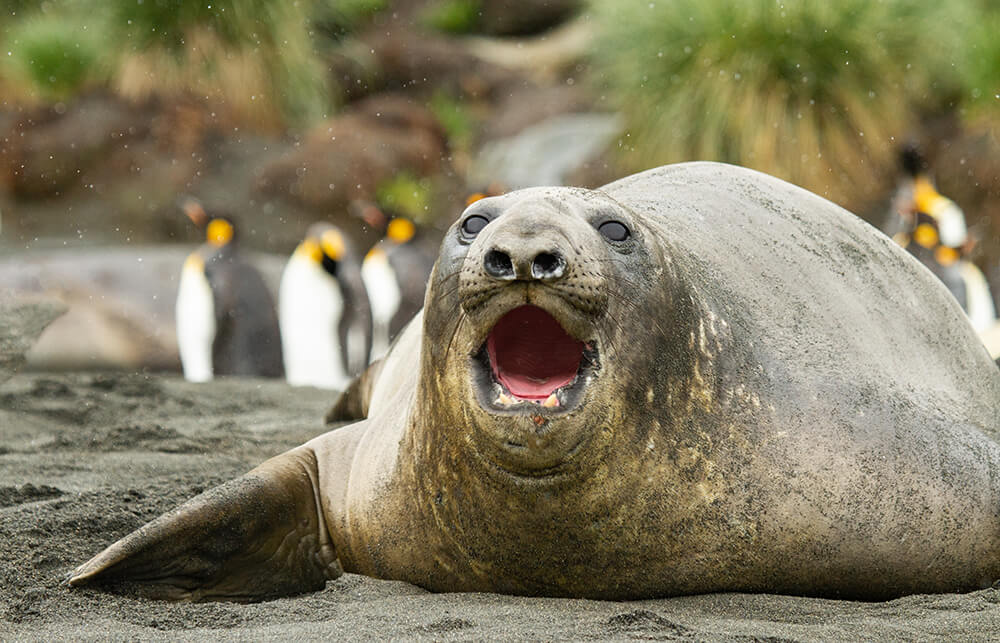 Animal photography is my favourite. I’ve photographed penguins in the Antarctic and I love Galahs. Until recently, my style of photography could be described as ‘spray and pray’. Though thankfully my prayers were often answered.

I went to Canon event in Brisbane and their support and advice was invaluable. It helped me develop as a photographer, see things and photograph in a different way. Greg was the person who told me about the ‘This is Australia’ program.

And your images are now in the ‘This is Australia’ collection.

Yes, thanks to Greg again. He ran workshops on setting up photography experiences and helping produce photos that suited the briefs. The potential financial rewards are appealing, but I’m just happy for the opportunity to showcase more of my images than had previously been possible. I’m finding the entire program exciting. It’s making me develop as a photographer and I’m learning to photograph in a different way.

Do you think the diversity aspect is important?

Very. I believe Australia is one of the most successful multicultural societies but we don’t see ourselves this way. I’ve travelled extensively and I’ve seen many countries that are not as tolerant as we are. ‘This is Australia’ will highlight the success rather than the media-driven focus on the isolated incidents that occur.

Fast-track yourself to become a contributor in ‘This is Australia’ program with Canon and Getty Images.

Back to Stories
Getty Images: This is Australia Collection

Learn More about 'This is Australia'
Don't miss these inspiring stories, events and tips
SHARE THIS PAGE