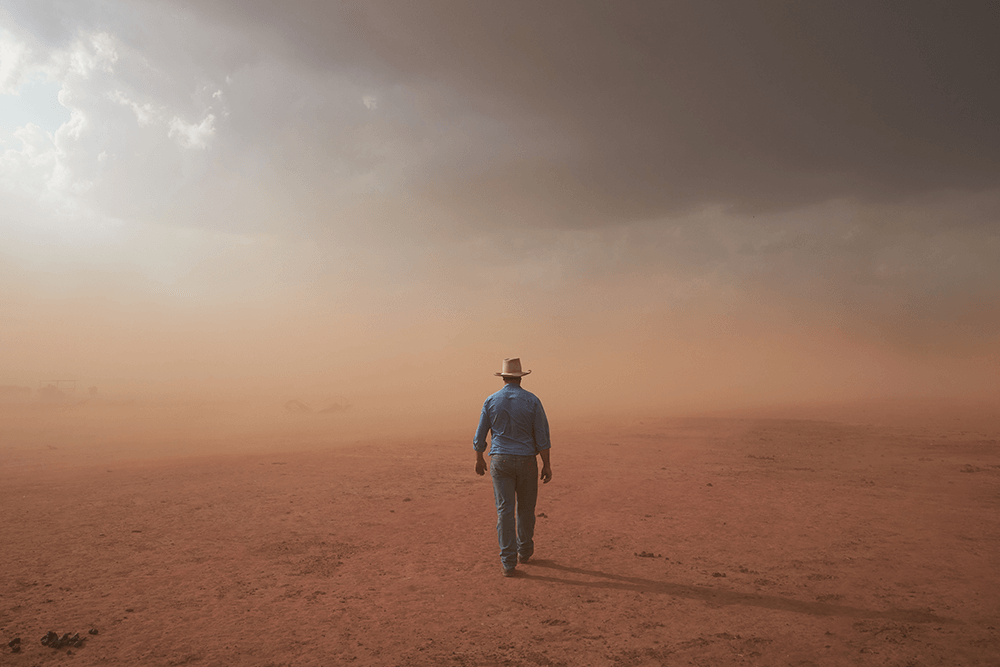 Commenting on Joel Pratley’s winning image, National Portrait Gallery’s Director, Karen Quinlan AM, says: “This work captures the fragility and uncertainty of the times. In a quintessentially Australian landscape, we see one man, completely surrounded and immersed by a power greater than himself. It is an extraordinarily powerful image.”

A self-confessed storytelling enthusiast, Joel Pratley received his first career break as a SUNSTUDIOS Emerging Photographer Award (SEPA) 2018 finalist, when his image was spotted at the finalists’ exhibition by a TV Director. Recognising Joel’s incredible ability to bring characters to life through his imagery, the Director offered Joel a job to capture publicity stills for ABC TV show, The Unlisted.

Reflecting on his photography journey, Joel Pratley says: “I was thrilled that my work was recognised at the SUNSTUDIOS SEPA finalists’ exhibition. I knew I had to make a great first impression on the set of my new job, but required a camera that had a completely silent shutter to ensure I didn’t disturb the cast. As a struggling photography assistant at the time, SUNSTUDIOS loaned me a Canon EOS R camera to get the job done, and from there my career was born.”

Speaking of his winning image, Joel Pratley says: “I captured the image of David Kalisch on his farm as part of a photoshoot aimed at raising awareness for Rural Aid. The shot would not have been possible without the Director of Photography, Campbell Brown, and Director, Kyra Bartley.”

Joel Pratley continues, “Having the right gear to capture a photo is key and the Canon EOS R camera and RF 28-70mm f/2L USM lens are true workhorses with the lens offering incredible colour profile. However photography, as I discovered, is also about being in the right place at the right time. As I photographed David on his farm, an immense dust storm hit highlighting the enormity of the challenges faced by farmers and the overwhelming uncertainty of their future. However, through the potential bleakness of that moment, the sun shone through the clouds, offering a ray of hope.”

As first prize winner, Pratley will receive $20,000 in Canon imaging equipment and $30,000 in cash from The National Portrait Gallery. Asked what he would do with his prize money, Joel said he would donate some of it to David’s drought affected farm and use the remaining amount for a meaningful passion project. Joel believes that photography empowers people to tell incredible stories that can shine a spotlight on issues and in turn help benefit those affected. He is currently working on a project in Sydney’s Waterloo which tells the story of how communities, including the Koori community, are being impacted by the gentrification of the area.

Nina Spannari, General Manager – Marketing & Customer Experience, Canon Australia says: “The National Photographic Portrait Prize is a celebration of excellence in photography, offering an insight into the work of some of Australia’s best portrait photographers. I am absolutely delighted to congratulate Joel Pratley, and the 75 other finalists for their incredible achievements. Canon Australia is proud to support NPPP as Imaging Partner and we hope the work of these awe-inspiring photographers, encourages more Australians to capture moments on camera and bring their images to life by printing and displaying them on a wall.”

In addition to supporting the photography community through the NPPP partnership, Canon Australia encourages emerging artists through initiatives including the SUNSTUDIOS Emerging Photographer Award (SEPA). Each year SEPA aims to break down the barriers image makers face in establishing a career by offering the chance to have their work evaluated and viewed by industry leaders. These opportunities can help photographers, like Joel Pratley, take their career to the next level.