We’d almost reached 82 degrees north in the Arctic Circle the day I saw my first polar bear. Crunching through the pack ice in Northern Svalbard on an expedition ship, I couldn’t have been happier to finally be exploring a place I’d dreamed about for a decade.

As much as I was blown away by the epic landscapes, icebergs, rumbling glaciers, and jagged mountains, I was there for one thing: to finally see and photograph polar bears in their natural habitat.

Choosing the gear to take


The best place to see polar bears in Svalbard is on the pack ice, which means you need to join a tour on board an expedition ship. Luckily for photographers, being on a ship means you can take as much gear as you like. So if you can get your hands on a long telephoto lens, definitely take it.

Using two camera bodies — one with a wide-angle lens and the other with a telephoto lens — is ideal, so you’re prepared for anything. If I had the chance to take something longer, I probably would have. 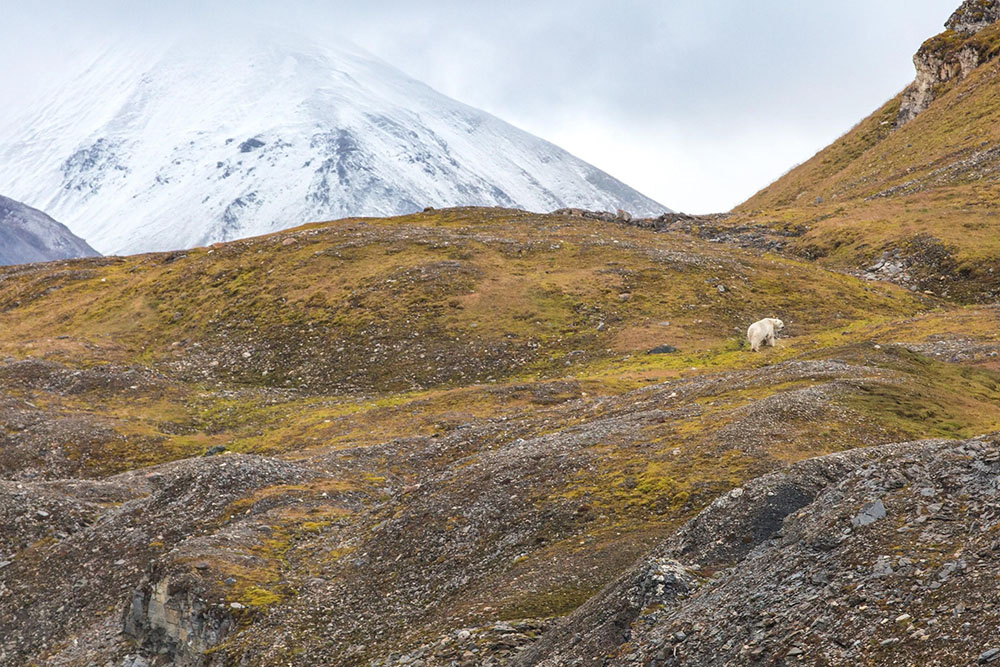 Polar bear spotted on land near a glacier in Svalbard


Wildlife photography is unpredictable. You never know how far you’ll be from the animals, or even if you’ll see them at all.

We spent a whole day on the pack ice before we saw our first polar bear, and by the end of the trip we’d only seen three. Two of the bears were quite far away, and shooting them with a 400mm lens was a bit of a stretch. Lucky for us, the third polar bear passed directly in front of us and we were able to get some great close-up shots. 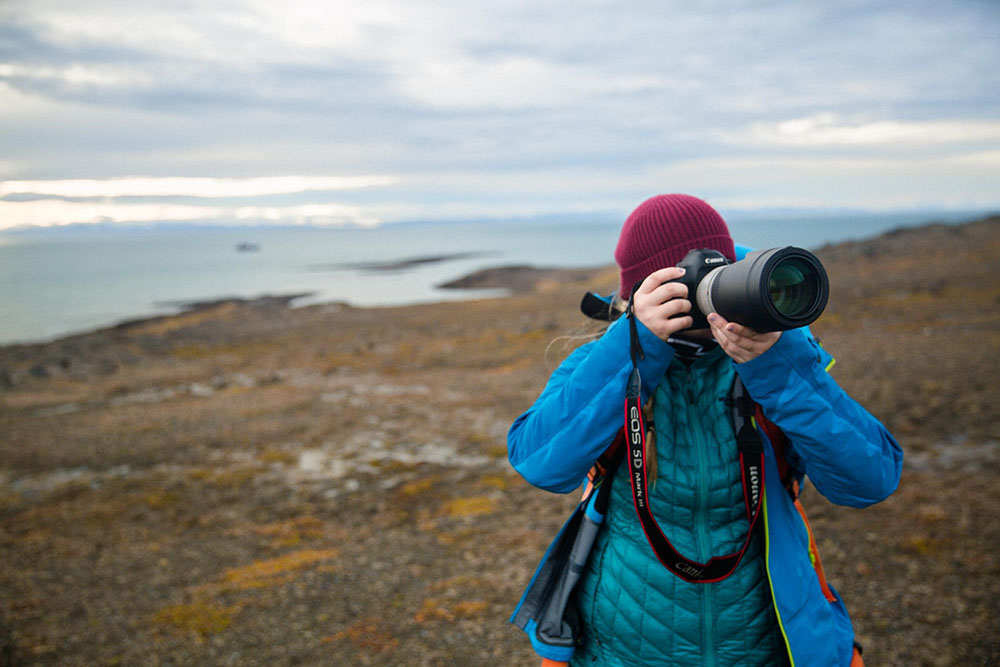 On location in Svalbard, Norway


Bears can move surprisingly fast, so I try to shoot on a fairly fast shutter speed, like 1/500th of a second. I often shoot with an f-stop around f/8 or f/9 to try and get all of the bear in focus. The other tricky element is polar bears are white - you’re shooting a white animal, in a white landscape, often with a white sky.

Generally, the weather isn’t cooperative. We had low grey light pretty much the entire time, so I had to shoot on a high ISO. Shooting in manual mode also helped because the bears often moved between white ice and dark water.


In Svalbard, it’s mandatory to carry a loaded firearm on land, because of the danger polar bears pose. But, the idea is to avoid using it at all costs.

Polar bears are endangered, so the killing of any bear is devastating to the population. It’s important to respect their space by and keeping a safe distance between them and you. The longer the lens you have, the better.

One of the most important elements of wildlife photography is the need to respect the animals. Spotting polar bears around 82 degrees north in the Arctic

It’s important not to approach polar bears, bait them with food, or draw attention to yourself. Close interactions between humans and polar bears don’t often end well.


The best tip I’ve learned with wildlife and nature photography is to let things happen authentically.

You can’t force the bears to behave how you’d like in a photo. Observe them in their natural habitat and be prepared to capture their behaviour organically. Be patient, let them come to you (at a safe distance), and let them get used to the giant ship. 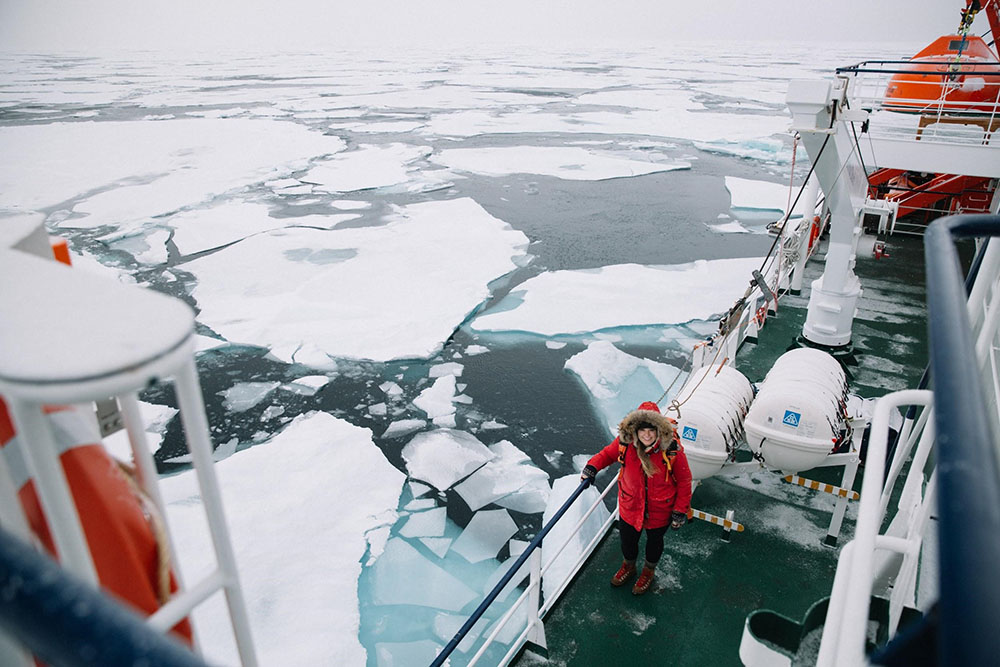 On the expedition ship in Svalbard


Luckily, if you visit Svalbard in summer you’ll be treated to 24 hours of sunlight, which is ideal for wildlife photography. It means you’ll often have enough light, no matter what time of day you’re shooting in.

However, working in a reflective landscape that’s entirely white (while looking for a white animal) poses a few challenges.

Just getting the white balance correct in-camera is tricky when you’re shooting in an entirely snowy landscape, and I often change it over to the cloudy setting to warm up the blues and balance it out correctly.

Polar bears actually aren’t as white as I’d imagined, they’re often quite yellow. Depending on the lighting, and how the bear was framed, I occasionally tweaked the white balance even more to make sure the bear didn’t appear too yellow. However, this is something I usually fixed in post processing (another important reason to shoot in RAW).

The lighting conditions, especially on an overcast day, are pretty much guaranteed to fool your light meter so you might need to overexpose your shots - just, make sure you don’t overexpose the fur of the polar bear too, especially if you are shooting close up. Pay attention to your histogram instead of the LCD screen, to make sure you aren’t clipping off on the right side. 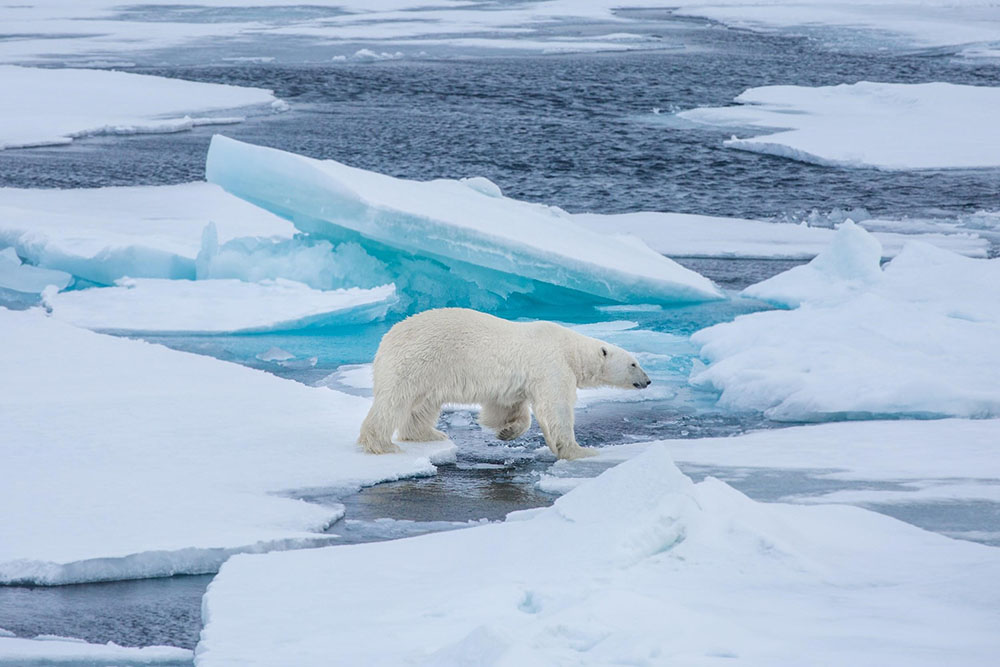 Be prepared for anything


It’s important to be as prepared as possible when shooting polar bears. Where they live in the Arctic, temperatures range from pretty cold to absolutely frigid. Camera batteries don’t cope as well in cold temperatures, so take spares and put them in your pockets, next to your body, to keep them warm. It would be a shame to miss that polar bear photo you’ve been waiting for because your batteries dead!

Layer Up: warm waterproof clothes, shoes, and photography gloves. Even though it was summer in Svalbard, it snowed several times and dropped below freezing frequently.


One of the hardest things I found shooting polar bears was trying to get creative with my photography.

I didn’t have much control over the ship — which impacted my angles — so I had to improvise.

You’re not able to shoot the bears against the horizon when you’re high up on a ship, luckily, most expedition ships have zodiac boats and landings so you might also get the opportunity to see a bear.

The experience of a lifetime


When it comes to photographing polar bears in their natural habitat, the advice I’d give to anyone thinking about doing it too is: plan for anything and everything, but also make sure you just enjoy the moment.

After I snapped off hundreds of frames of one of the polar bears on the ice, I put my camera down to observe it on its own, not through a lens. Along with great photos, I wanted to make sure I left Svalbard with beautiful memories of a magnificent animal.


Liz Carlson is the travel photographer and blogger behind Young Adventuress — the world's leading solo female travel blog. When she’s not travelling the world, she lives in Wanaka —one of New Zealand’s winter hotspots.