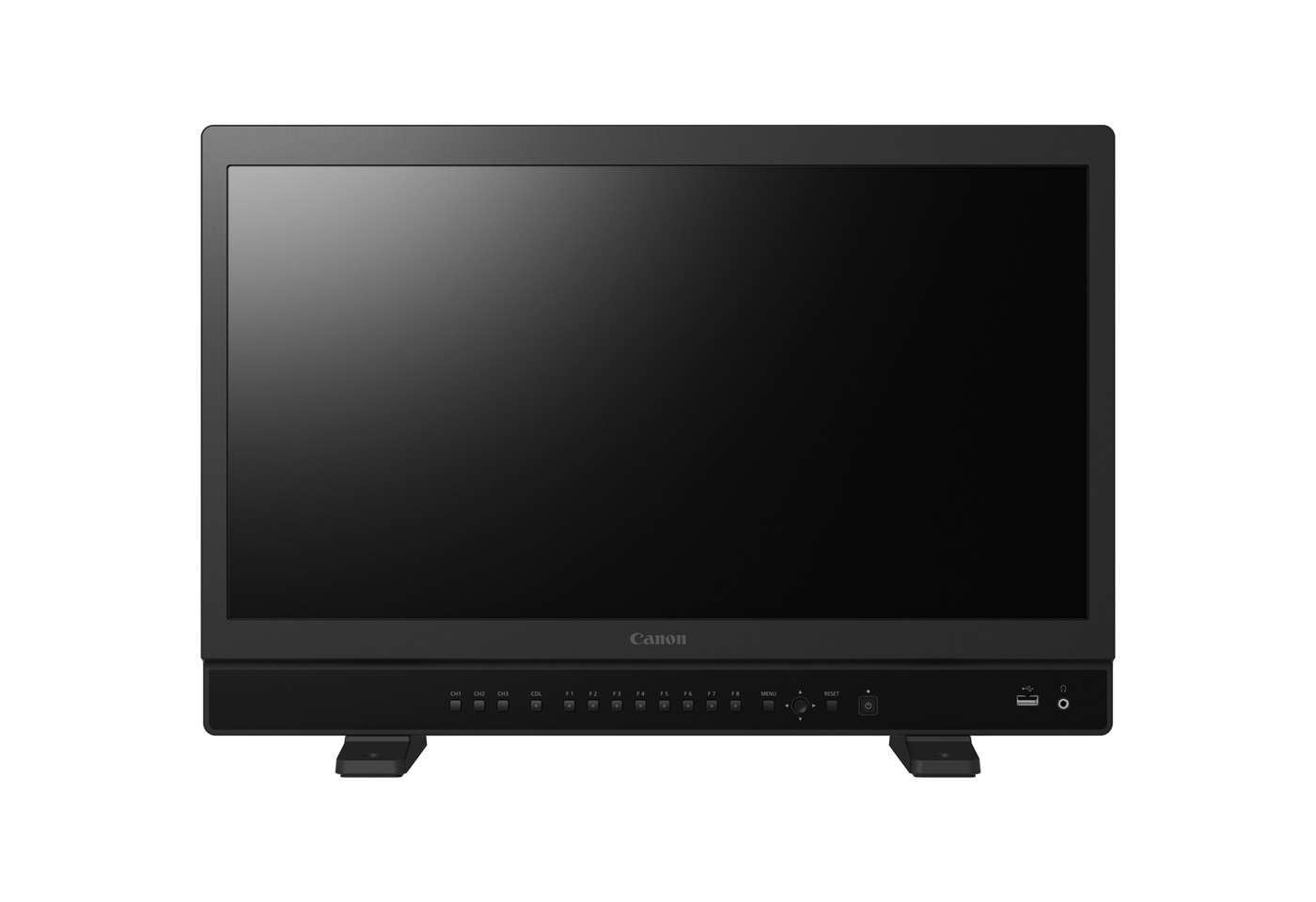 Details of changes made to the firmware
This firmware (Version 1.2.1) incorporates the following fix:

1. Fixes a phenomenon in Firmware Version 1.2 in which the main unit of the reference display may restart when the F3 function key is operated.

Please check the firmware version on your display. If it is running Version 1.2 or earlier version, then it should be updated to Version 1.2.1. There is no action necessary if the display's firmware is Version 1.2.1.

1. 2-picture or 4-picture display*1 of 12G/6G-SDI 4K video signals and 3G/HD-SDI 2K video signals can now be performed with a single display.
2. The audio level meter of multiple terminals can now be simultaneously displayed*2 in 2-picture or 4-picture display mode.
3. "Wave Form Monitor" and "Vector Scope" can now be simultaneously displayed within the screen.
4. The video display position can now be adjusted using "Top", "Middle" and "Center" in 2-picture or 4-picture display mode.
5. Waveform monitors of HDR video and SDR video can now be simultaneously displayed and the waveform monitors after LUT conversion can now be displayed in "Compare View" mode.
6. SDR video picture quality settings (contrast adjustment, color temperature, gain adjustment) have been added in HDR/SDR comparison display mode.
7. Comparison display that adapts four different user LUT using "CDL/UserLUT" is now possible in QuadView display mode.
8. Display picture quality settings can now be automatically switched by Transfer Characteristics (PQ/HLG/SDR), Bit Depth, and ICtCp of the Payload ID.
9. The picture quality and channel settings of multiple displays connected via a LAN can now be switched in conjunction.
10. Settings can now be exported and imported between multiple different models and via LAN.
11. Warning display is now possible for input signal errors such as no signal or unsupported signal and for incorrect 2-Sample Interleave signal connection order.
12. Warning display is now possible for SDI signal CRC errors.
13. When inputting 8K video (2-Sample Interleave signal) with four 12G-SDI cables, it is now possible to sequentially switch and display the video of each input terminal at regular intervals, and to display a warning when the video signal of a non-displayed terminal is incorrect.
14. A setting has been added that switches terminal order sorting ON and OFF according to the Payload ID when inputting a 2-Sample Interleave/3G-SDI Dual Link signal.
15. "Luminance Graph" display that uses gradations to express the brightness distribution within the maximum brightness and "HDR/SDR Ratio Graph" display that expresses the brightness ratio of HDR areas and SDR areas have been added to "Frame Luminance Monitor".
16. The peak and average brightness values and time codes obtained by "Frame Luminance Monitor" can now be output to a USB memory.
17. The brightness signal histogram of the input video can now be displayed. In addition, the HDR/SDR ratio and the peak and average brightness can be displayed, the HDR signal area can be colored with the same color as that used for false color, and areas that are the HDR range or higher can be colored with a warning color.
18. "False Color" display and operability have been improved, such as by adding HDR area and SDR area brightness boundary settings and enabling color-coding of SDR areas using two different colors.
19. A function has been added that automatically sets the HLG signal system gamma according to the contrast value.
20. The display size settings "Large", "Middle" and "Small" have been added to " Wave Form Monitor".
21. The display size settings "Large", "Middle" and "Small" and the target setting "75+100%" have been added to "Vector Scope". In addition, a function has been added that changes the target frame to the BT.2020 position during BT.2020 YCbCr signal input.
22. GPI control type settings have been added. Some functions now support level control that turns the functions ON and OFF according to short-circuit/open, and short-circuit edge control that turns the functions ON and OFF at the short-circuit timing.
23. A function has been added that displays a function list when the jog dial is pressed or moved (up/down/left/right or rotated) while the OSD is hidden. In addition, a function can be selected from the function list and the detailed setting screen for that function can be displayed or the function can be executed by pressing or moving (right) the jog dial.
24. A function that adjusts the OSD brightness has been added.
25. A function that adjusts the brightness has been added to "Audio Level Meter".
26. Display settings such as picture mode display have been added to "Banner".
27. A function of "Half" has been added to "Separator".
28. A function has been added that performs 2-picture display of the entire image and the enlarged image during zoom display.
29. A function that creates a HDR/SDR comparison file has been added to "Screen Capture".
30. A function that performs Wi-Fi connection by the access point method has been added.
31. Functions have been added that perform operations such as LUT import and setting import/export via the Internet during remote control by Wi-Fi or LAN connection.
32. The "x1.8" setting has been added to "Anamorphic".
33. Some TSL ver5.0 Unicode (Japanese/Chinese, etc.) can now be displayed in "In Monitor Display".
34. Some setting defaults have been changed, such as the function button defaults and the User4 mode "DCI PQ D65", etc.
35. Other operation performance enhancements have been made.


Software Used in This Product
Software installed with this product includes software modules from Canon or third parties.

Software Developed by Canon and Free Software
Software developed or created by Canon and accompanying document is protected by copyright law, terms of an international convention and any other governing laws.
This product uses software modules under copyright by third parties and distributed as free software. Some of these software modules are subject to the GNU General Public License v2 (GPL), GNU Lesser General Public License v2.1 (LGPL) or any other license.