Filmmaker, Anthony Gordon has over 15 years’ experience shooting documentaries, TV Series’, and commercial videos. In a bizarre twist of fate, the Japan Aerospace Exploration Agency (JAXA) hired Anthony as the official stills image photographer for the return of the Hayabusa2 - a scientific research capsule returning from its seven year mission to the far reaches of our galaxy.

The out-of-this-world opportunity literally came knocking on Anthony’s door when his wife’s friend visited his home in 2020. The friend’s husband was a filmmaker who recently won a bid to be the official videographer for an upcoming JAXA mission, and they needed a stills photographer with specific helicopter experience to join their crew. With both the photography skills and the helicopter prerequisite under his belt, Anthony was intrigued to hear more. 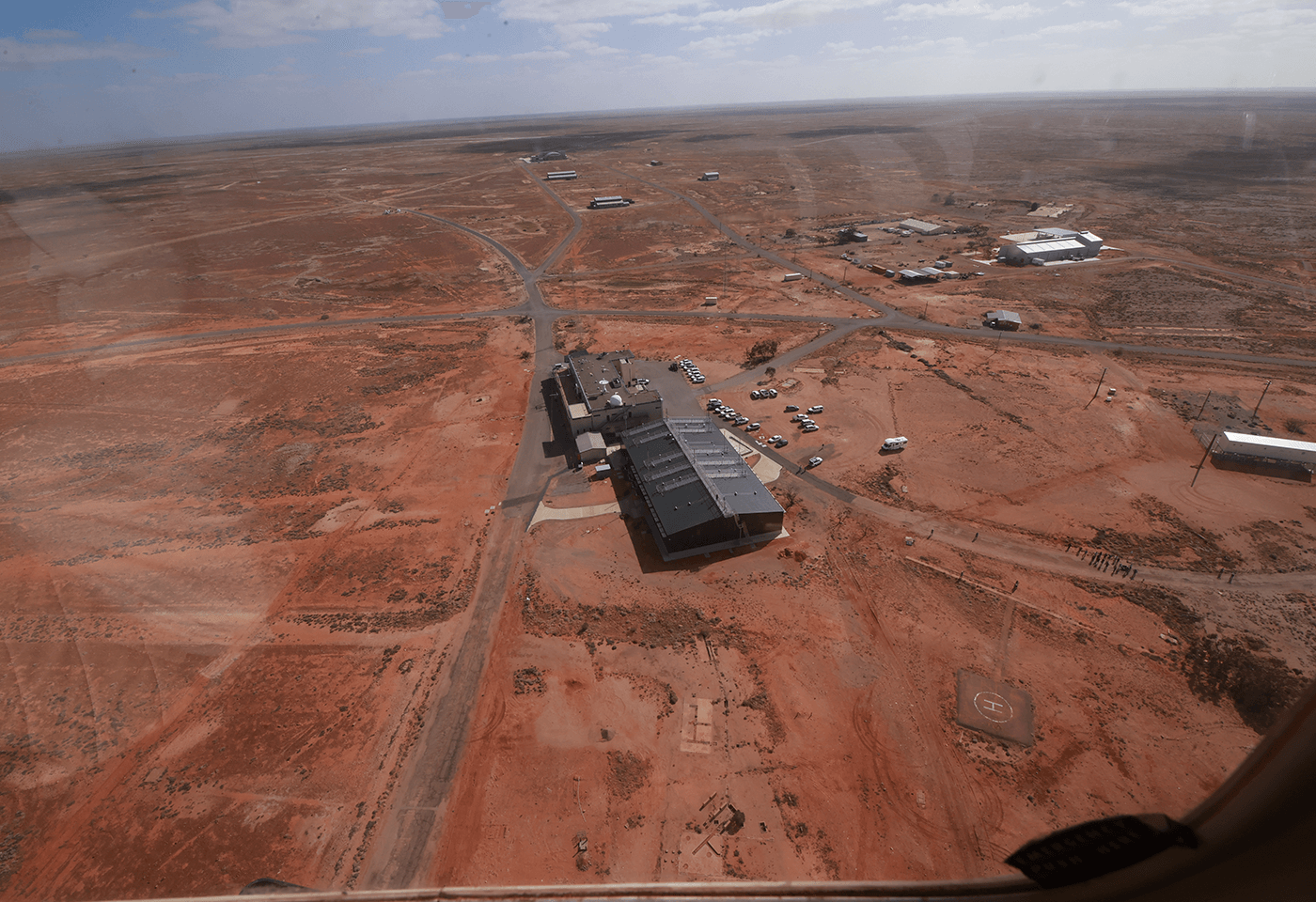 It was revealed to Anthony that, back in 2014, JAXA had launched the Hayabusa2 spacecraft and set it on course to the 4.5 billion-year-old asteroid known as Ryugu – a diamond shaped space rock orbiting the sun between Earth and Mars. Hayabusa2’s mission was to collect and return to Earth samples taken from the surface of the asteroid to help scientists answer fundamental questions about how our solar system was formed.

“In saying yes to the role, I was saying yes to the first stills job I’d done in about 10 years, as all my recent work had been video-based,” says Anthony. “Although JAXA knew plenty of film and video guys in Australia, they didn’t know any photographers with the necessary hours logged in a helicopter, which I had. I felt so lucky to get the job!”.

It took Hayabusa2 four years to reach the asteroid, traveling some fifteen-million kilometres from Earth. “It turns out that the further you move away from Earth, the further back in time you go,” Anthony explains. “This means that, in scientific terms, JAXA was landing on an asteroid that existed either just before or around the same time that the Earth was formed.”

Hayabusa2 began its journey back to Earth at the end of 2019 and was scheduled to touch down 6 December 2020. Its landing target: Woomera desert in South Australia – and Anthony would be there waiting alongside JAXA’s team of scientists with his Canon camera poised.

Finding a Spacecraft in a Haystack

JAXA’s scientists knew the capsule containing the samples would land somewhere in the Woomera Rocket Range, but with an area covering some 122,000-square kilometres, it was a whole mission in itself just to track it down. This is where Anthony received his first official job to join the scientific team responsible for locating the capsule. 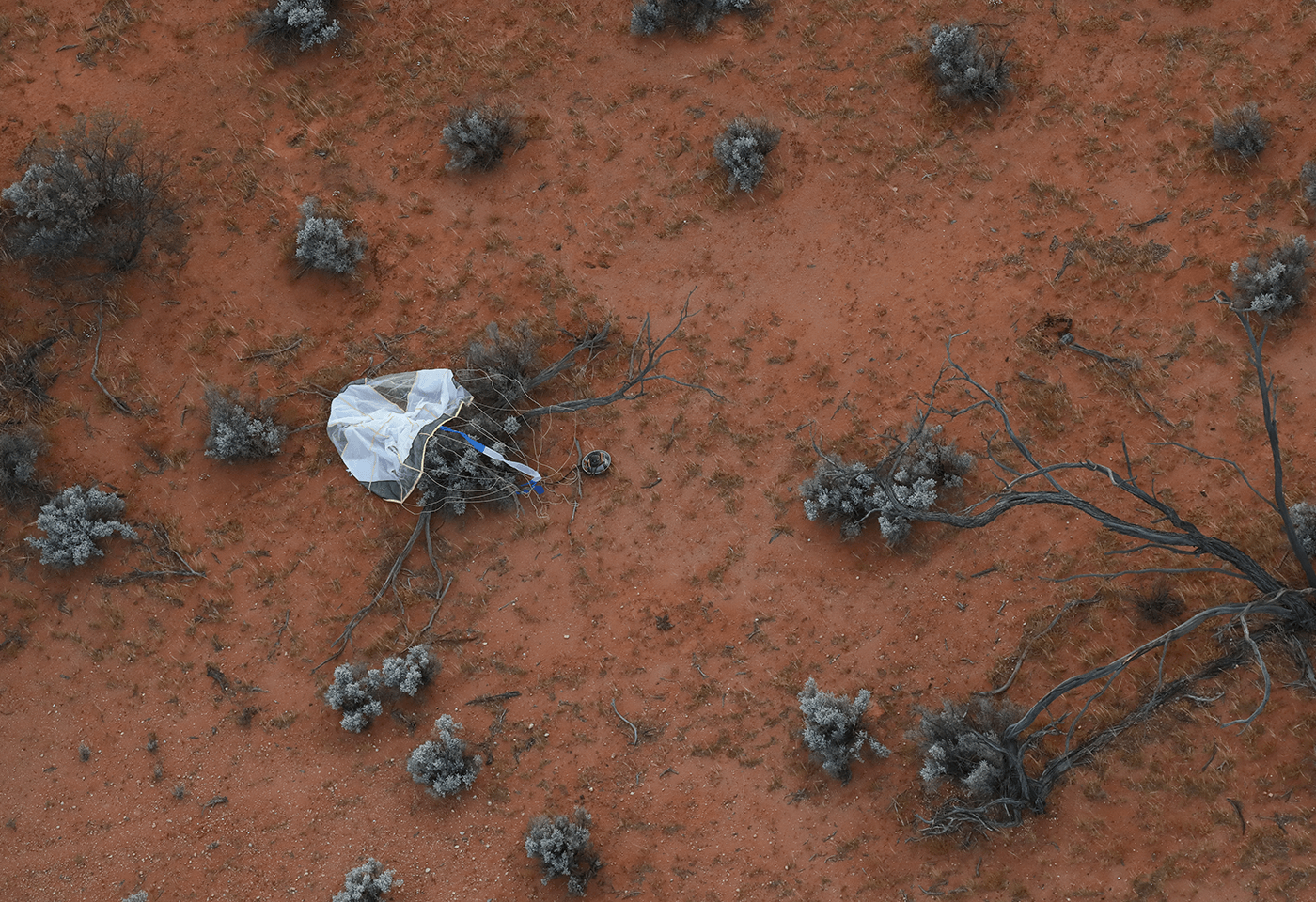 “Our call time was 11pm but we sat there until 4am waiting to go out and find it. Once in the helicopter, my first goal was to take the photos that would be used to officially confirm it was the real capsule.”

Drawing on his experience shooting from helicopters, Anthony knew he could trust the Canon EF 200-400mm f/4L IS USM to get the job done. “It’s a heavy lens but the stabilisation is insanely good!”

Under normal circumstances, Anthony says he would have used his Canon EOS-1D X Mark III and sent the images to his phone via the Canon Connect app, then transferred them instantly to the scientists so they could identify the capsule almost instantly. However, because the images were extremely confidential, Anthony and the team flew back to base to personally hand over the memory card.

“Cheers went up at the base when it was confirmed that my images did indeed capture the Hayabusa2’s sample capsule. The confirmation meant we could then fly back to the site to retrieve it.” 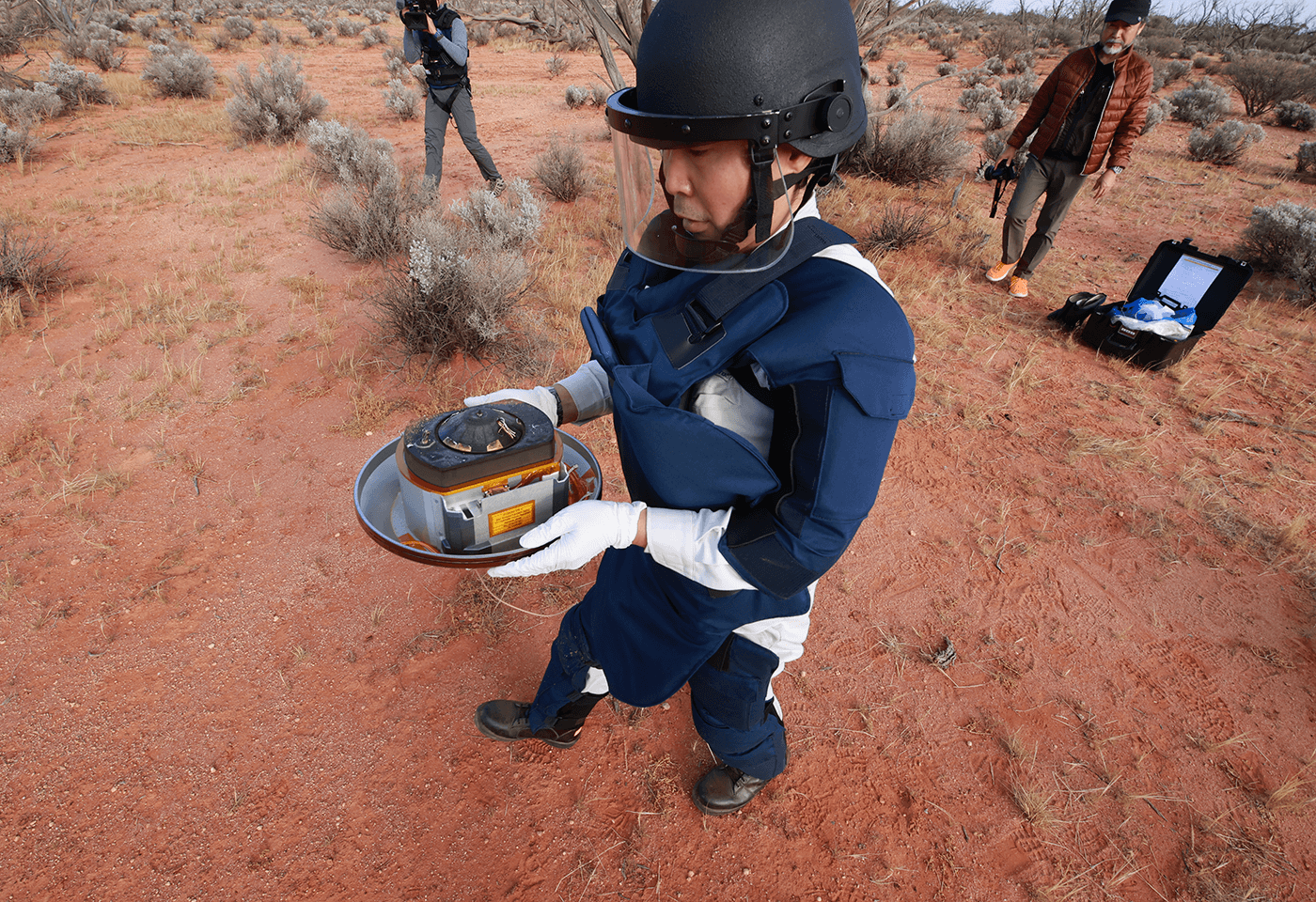 “Once at the site, the lead JAXA engineer who built the engine for Hayabusa2 was given the honour of collecting the samples from the desert floor. He treated the role with such respect and diligence. The image I have of him almost looks like he is performing a sacred Japanese tea ceremony. To me, it was a culturally significant moment that will never be repeated.”

Is There Anybody Out There?

JAXA scientists hoped that Hayabusa2 would retrieve around 1 gram of surface samples from the Ryugu asteroid, but what came back was almost five grams, which scientists divided up to make multiple nano-samples.

“Initial tests found evidence of hydrogen, which is extremely rare and got many people in the team excited. The thinking is that this sample could house the first organic matter ever found outside of Earth. If true, this would have significant scientific ramifications across the world.” Anthony enthused. 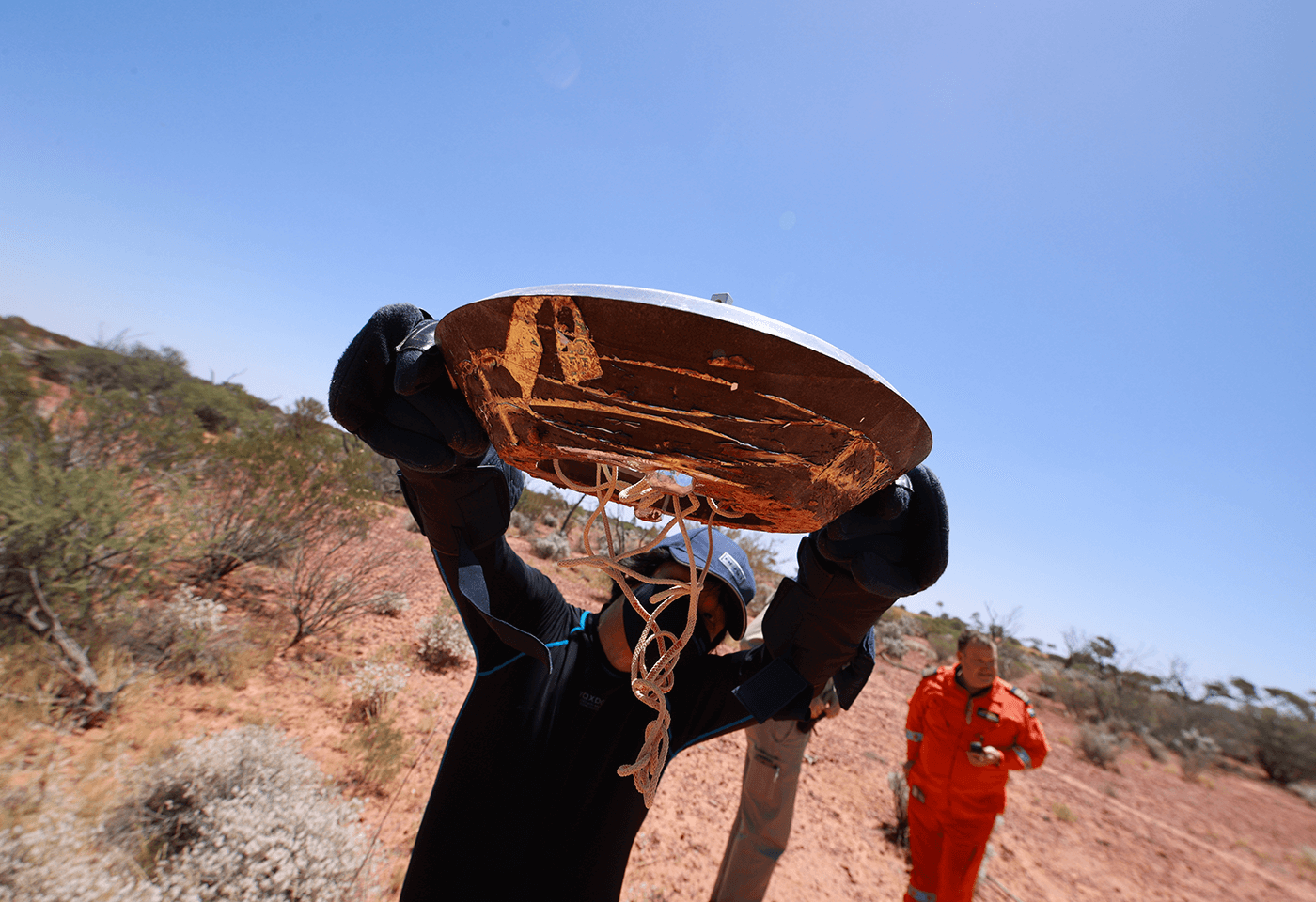 The samples will be studied by space agencies across the world, with a small percentage to be safely stored for future scientists to study when technology is more advanced.

Anthony's 'Out of this World' Images

Over a period of 10 days Anthony captured 1,200 images of the space capsule’s retrieval, but was asked by JAXA to choose just five for public use. Four of his images are displayed on the official Hayabusa2 website, and are also used in the official landing video.

"These particular images were used by news sites around the world and has been viewed by hundreds of millions of people". Anthony said proudly. Anthony used the same gear for this space-aged photography project as he normally uses for his film work. “People think you can’t shoot documentaries on DSLRs. Those people are wrong,” says Anthony.

“I had to stay light with my kit due to the weight restrictions on the helicopter, but two cameras and two lenses were actually all I needed anyway. You don’t need a lot of gear, you just need the right gear.” 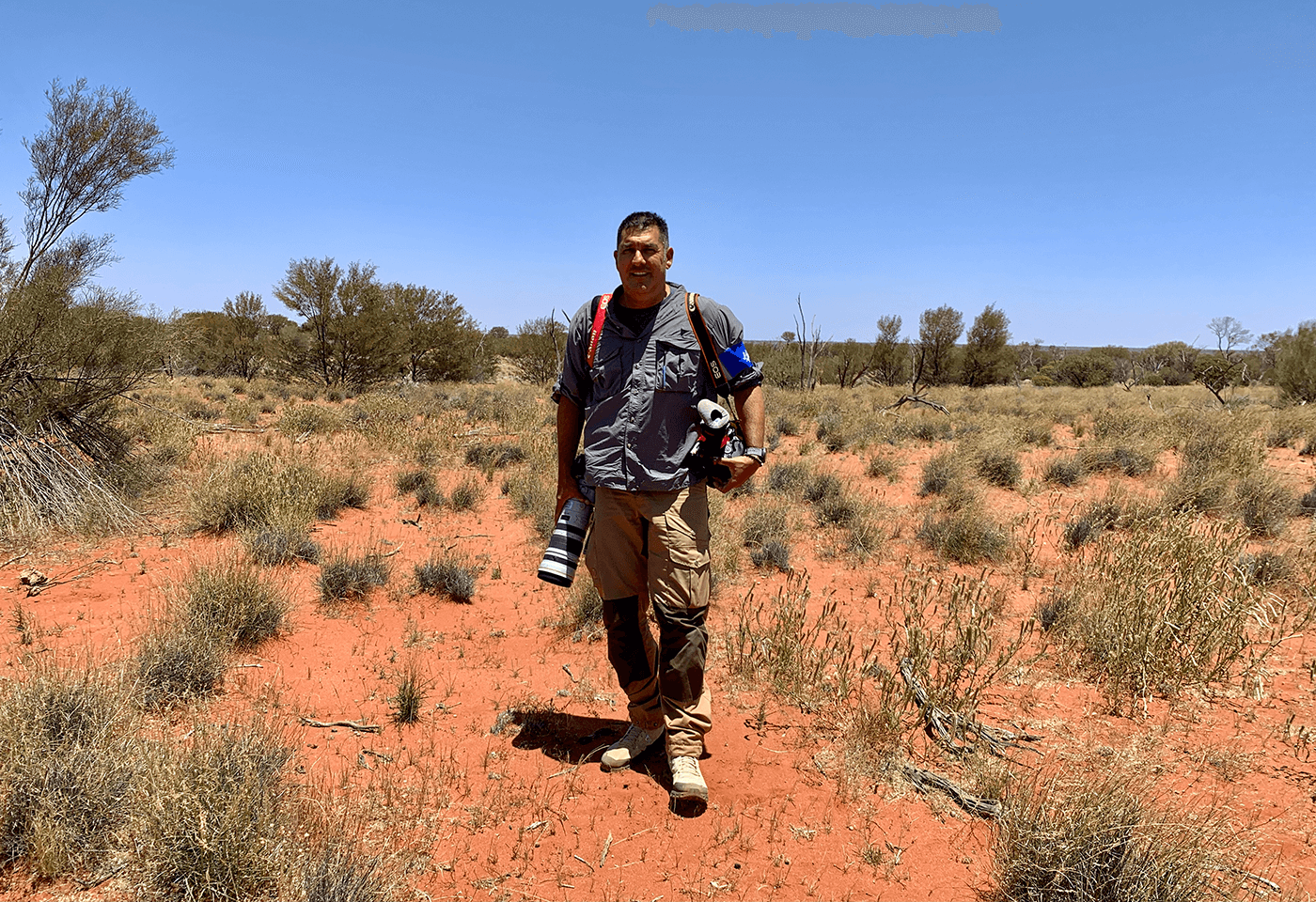 “Across the 36-hour shoot, I only used 3 batteries – the Canon EOS 1 Series cameras are built to last. The camera was always on, always on autofocus, and always ready to perform.”

As Anthony pointed out, it pays for creatives not to pigeonhole themselves as either a videographer or stills photographer. “If you have the skills for both, opportunities will present themselves that just might explain the origins of life on Earth – literally!”

Find out more and see Anthony’s photos on the official JAXA site.