/ Get Inspired
/ Champions
/ A Long Way From Home: Life Inside the Zaatari Refugee Camp
Feature Image by: Darrian Traynor

A Long Way From Home: Life Inside the Zaatari Refugee Camp

I can trace my interest in the global refugee crisis, and displacement of people, back to a single photograph. It’s an image of Palestinian leader Yasser Arafat and Israeli Prime Minister Yitzak Rabin with U.S. President Bill Clinton, on the White House Lawn. That iconic photograph triggered my curiosity in Palestine and its people — an interest that quickly expanded to include other countries in that region.

In 2016, I travelled to Gaza, Palestine, wanting to expose myself to the reality of life there. My photographs from that trip won a United Nations Association of Australia Media Peace Award. Spurred on by the impact that work had, I decided to focus my attention on the Syrian conflict, and the massive flow of refugees trying to escape it. This was the catalyst for my trip to Jordan’s fourth largest city: a refugee camp called Zaatari, which is home to 80,000 Syrian refuges. 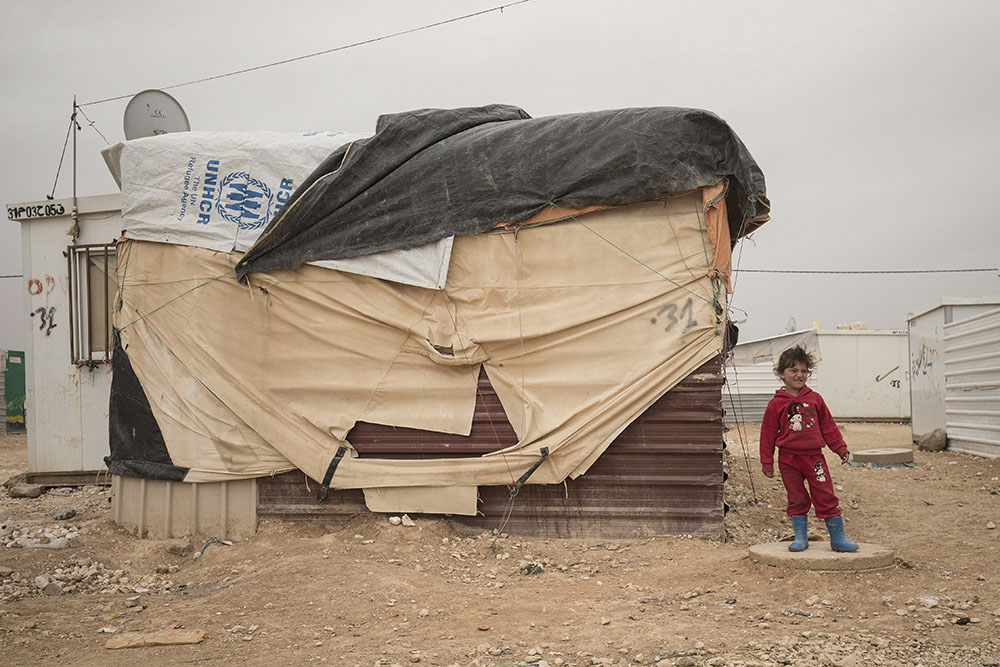 A young girl stands outside her family’s home.

I’d never be so presumptuous or arrogant to assume I could fathom what these people have gone through, nor did I want to put myself up as their spokesperson. I simply hoped to share their story with the world, through images. 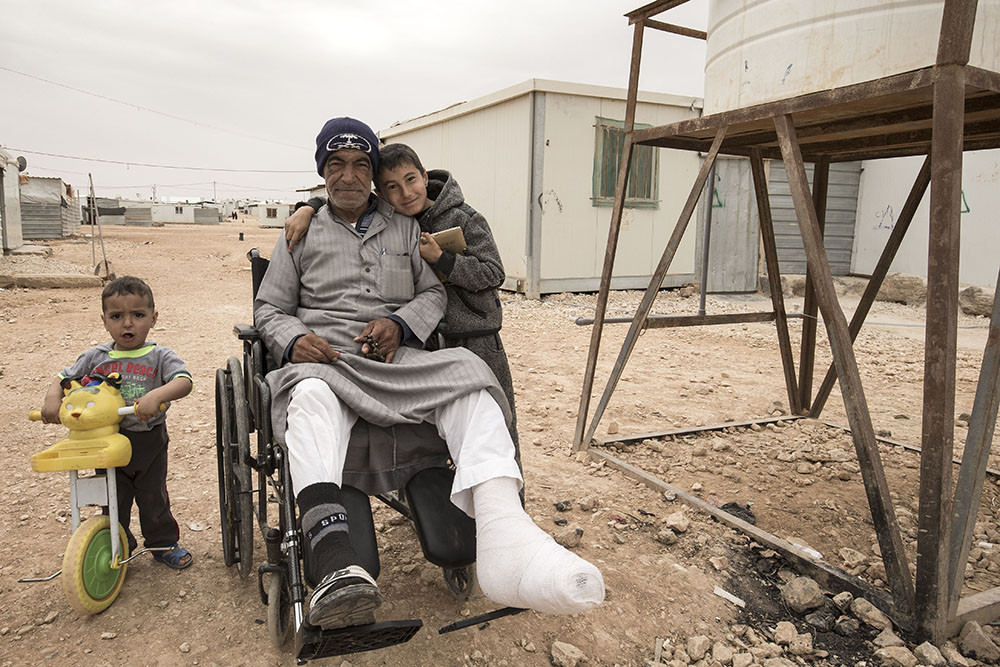 This man suffered a broken leg when he was struck by a sewage truck in the camp. The children of the camp often play around him as he sits in his wheelchair.

The people of Zaatari were so generous towards me. I was given access to their lives; I was welcomed into their homes, and met their children. They were open and honest in reliving horrific stories from their journey.

Until a few years ago, makeshift tents made up the majority of the camp dwellings these people lived in. These are now largely gone, and there’s been a marked shift in infrastructure to more permanent constructions, with water and sewerage systems. 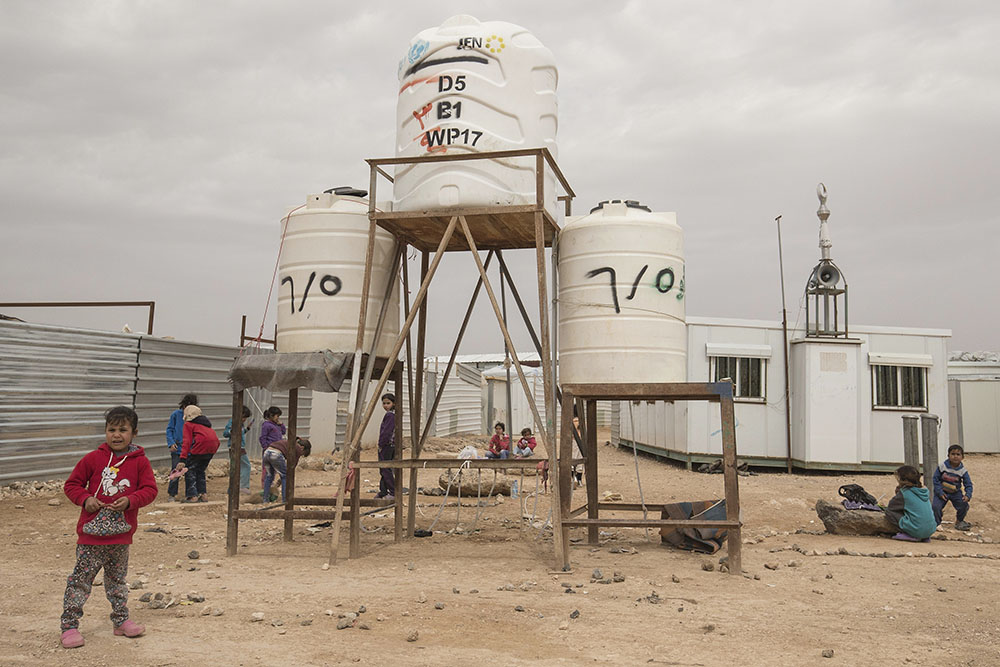 
There’s a growing sense of resignation among the Syrian community of Zaatari that this is now their home. 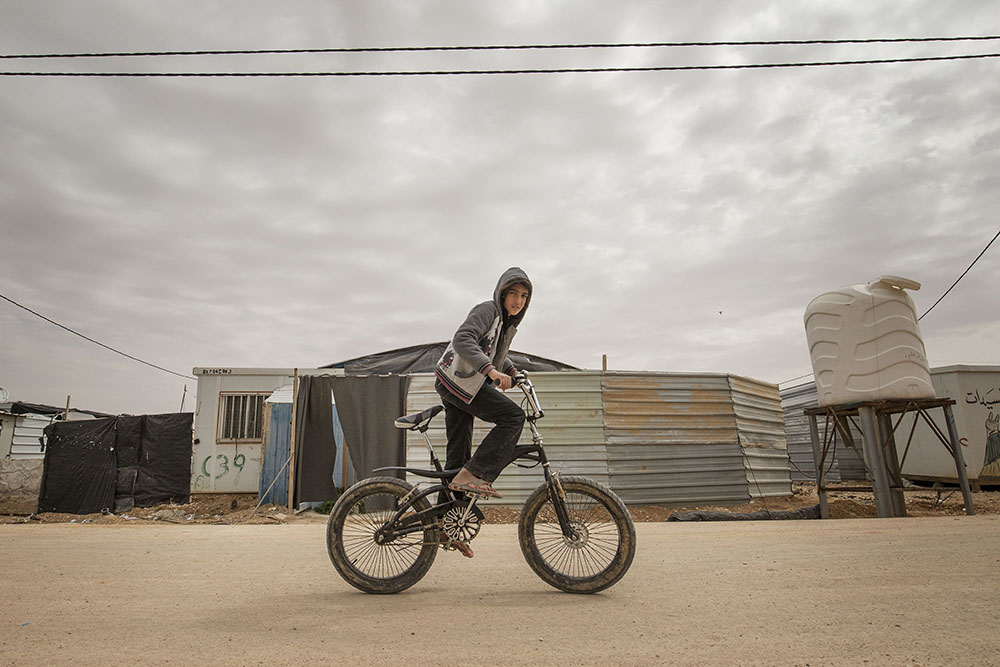 Fortunate enough to have a bicycle, this young boy rides around the camp zipping in between people walking by. 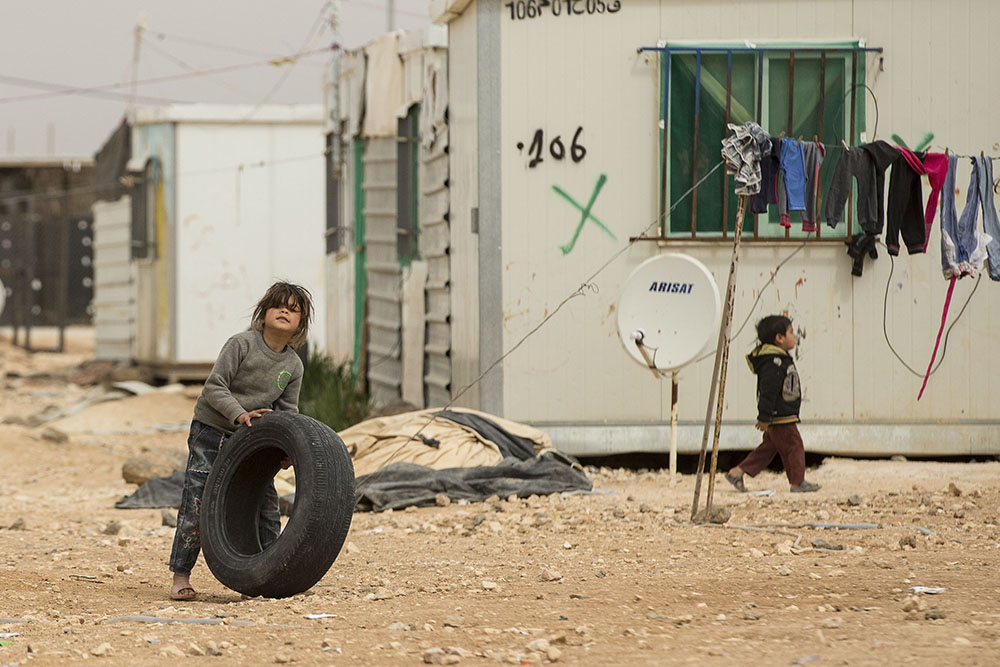 Making do with what you have — this young girl plays with an old tyre.

Since it was established in mid-2011, the population has swelled to around 80,000 Syrian refugees. Zaatari isn’t accepting additional refugees, but the population continues to grow through births. The camp has several women’s clinics; the one I visited had successfully delivered over 7,000 babies since the start of the conflict in Syria. 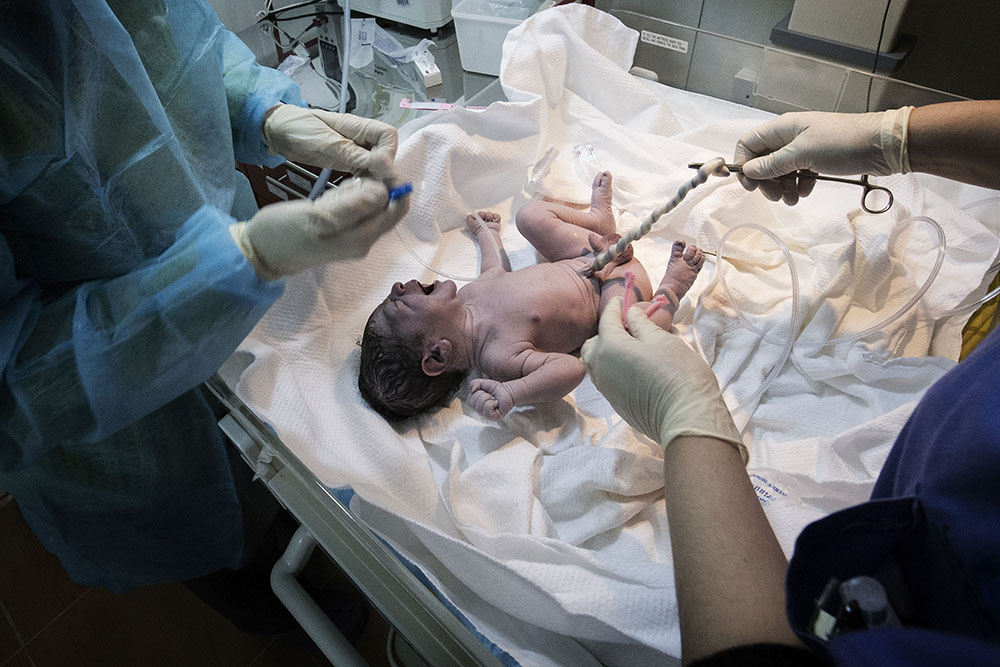 Born in the Women’s Clinic inside Zaatari this young baby is treated and checked by nurses only minutes after birth. 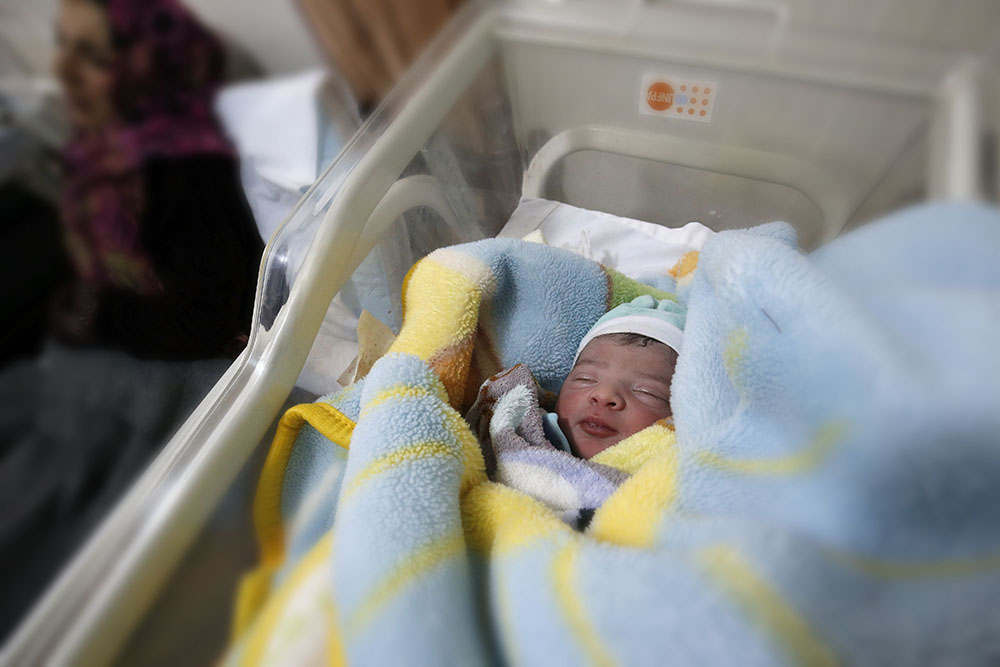 A newborn baby is seen in the recovery section of the Women’s Clinic spending the obligatory 24 hours in the clinic’s post-natal room.

The United Nations and a few N.G.O.s have set up schools inside the camp for the thousands of children who call Zaatari home. These schools run two sessions per day, in an attempt to accommodate the huge number of children. This being the case, the camp’s young population roams the camp while not in class, trying to find entertainment.

The children of Zaatari assist their family, doing ‘household chores’ like any other population. I saw some cleaning-up around the house, and some fetching fresh water from the water tanks dispersed around the camp. Some would help out in family run businesses. 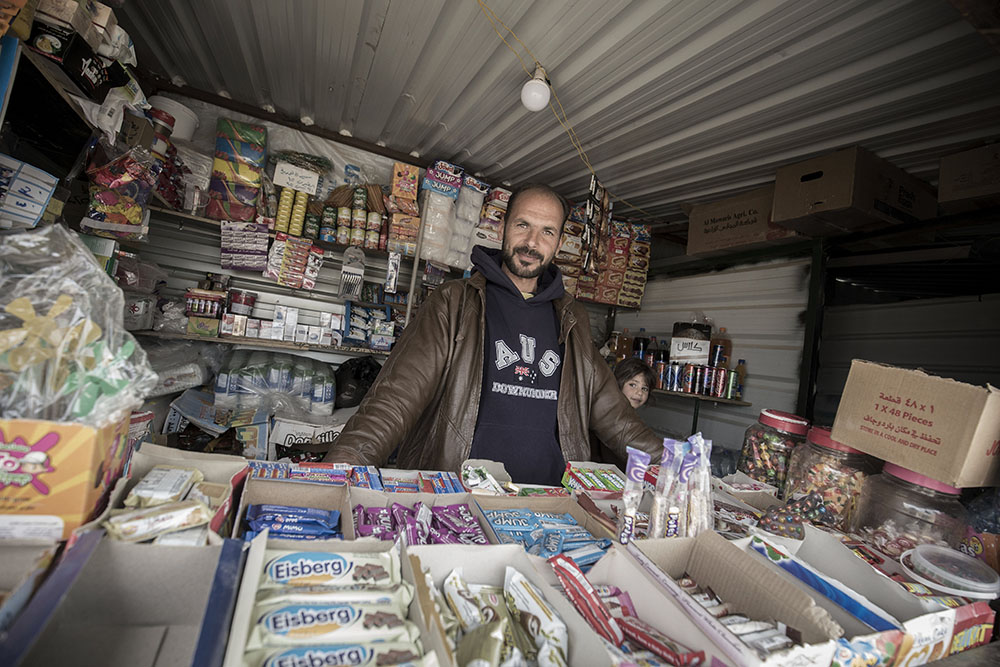 A young girl pokes her head out from behind her father as he tends his small store inside Zaatari.


These people share more in common with us than we know.


They strongly value the family unit and their sense of community; they want a better life for their children. It’s for these reasons they’ve fled war and conflict.

These people are resourceful, independent and hard working. All traits we value in Australia.

Speaking from my experience, they aren’t 'country shopping' and looking for a free ride, as many would have you believe.

Although most of the people I spoke with said they would return to Syria tomorrow, if it were safe, the reality is huge numbers of Syrian refugees — across not only Jordan and other Middle East countries, but around the world — may never return. 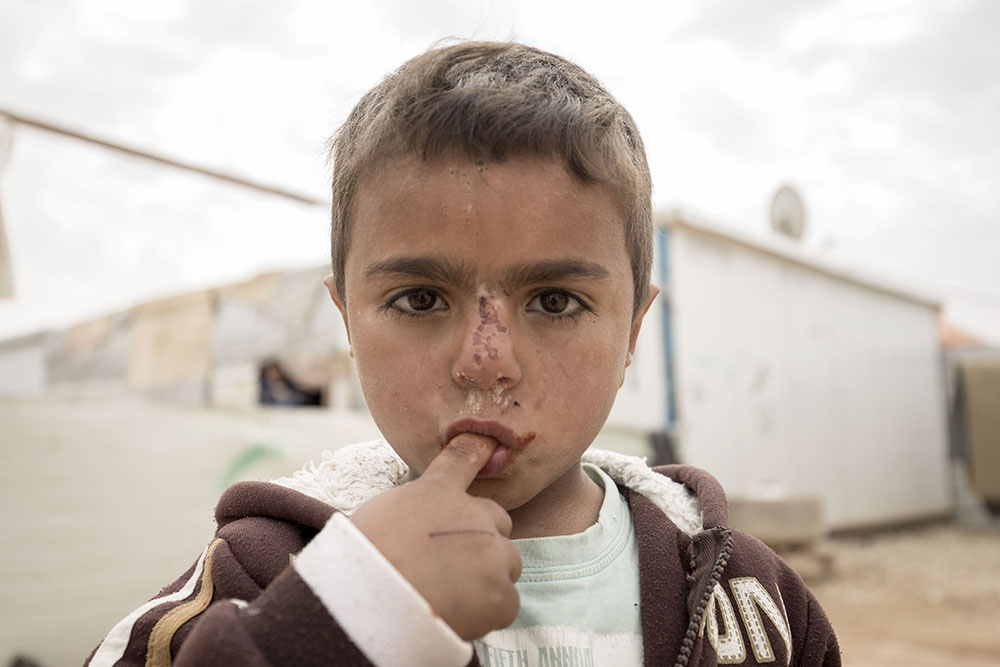 A curious young Syrian boy approaches me and my camera. 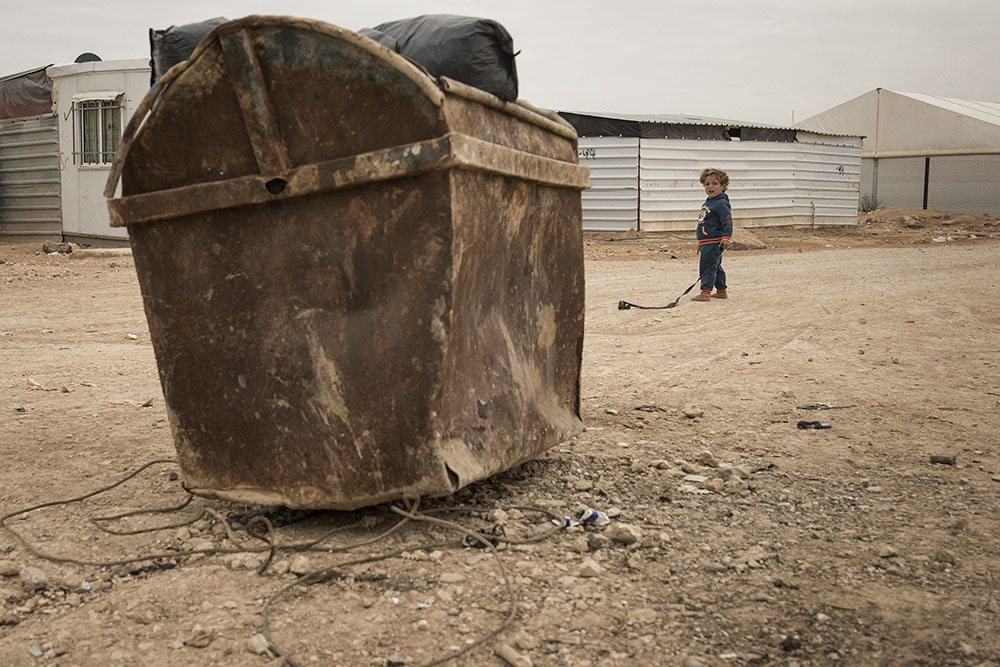 A boy plays on the road outside his family home.

Darrian Traynor is a freelance photojournalist based in Melbourne, Australia. He works as a stringer for Getty Images and Fairfax, covering sports, news, and major events.

His personal work has a humanitarian feel to it. Using his skills as a photographer, he aims to share the stories of people without a voice, and attempts to provide a perspective that is often overlooked by mainstream media in both Australia and around the world.