/ Get Inspired
/ Champions
/ Our favourite Images of 2021 from the Canon Collective
Feature Image by: Neil Kendall

Our favourite Images of 2021 from the Canon Collective

To celebrate the end of the year, we’ve chosen 10 of our favourite images shared by the Canon Collective Facebook Community.

The quality of imagery and discussions shared in the group continues to impress and inspire us everyday!

We hope you enjoy!

(In no particular order) 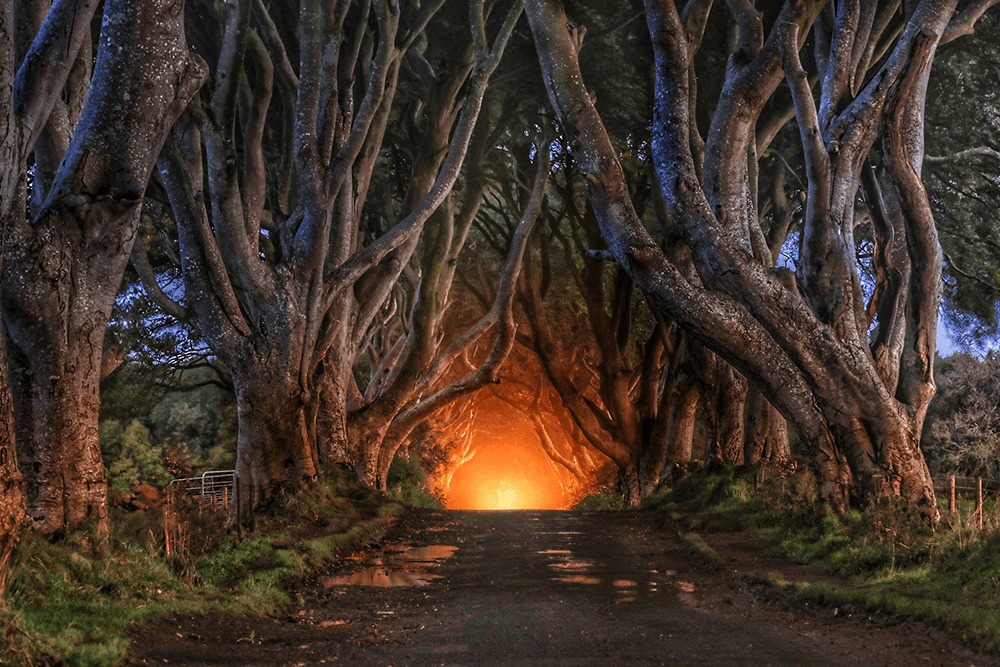 Morning at the Dark Hedges
”During my vacation to Ireland, I got to visit some of the sites that have been seen in the classic series, Game of Thrones. The Dark Hedges, Ballymoney, is an avenue with beech trees planted over 200 hundred years ago. The atmosphere is almost ethereal walking down the road. Sunrise is a beautiful time to visit. “ 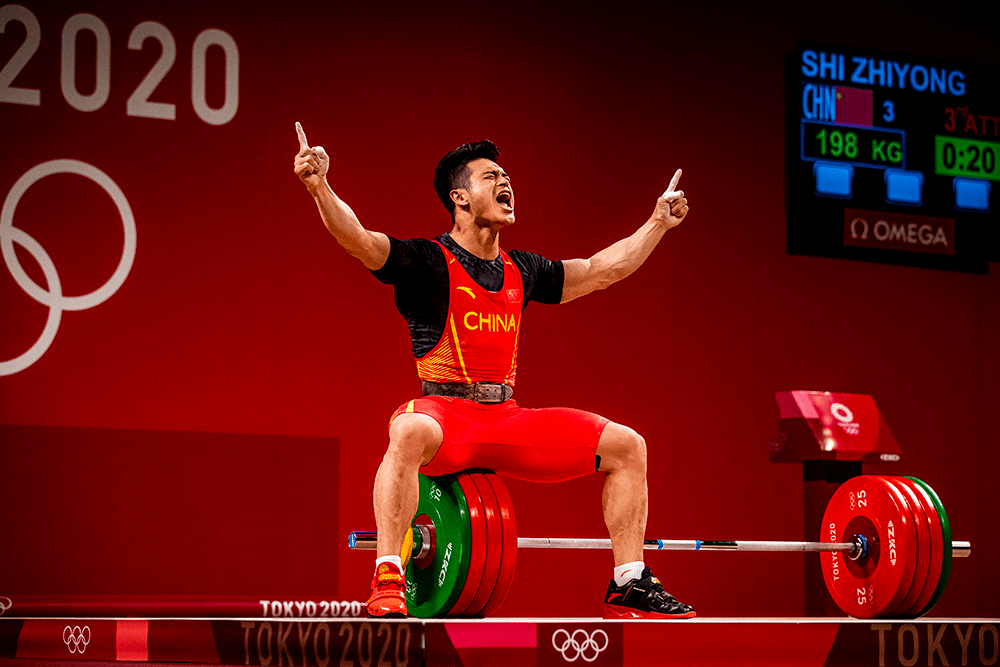 Number one
”Weightlifting is a phenomenal battle of strength, speed, steel, and gravity. The athletes vast emotions while attempting to raise the bar is intoxicating. At Tokyo 2020 the Chinese Team was unstoppable, with all but one athlete taking gold in their respective body-weights. SHI Zhiyong didn't disappoint in his celebration after raising 198kg in the clean and jerk to take the gold in the men's 73kg bodyweight category, set a new World Record total and to become a two-time Olympic Gold Medalist.” 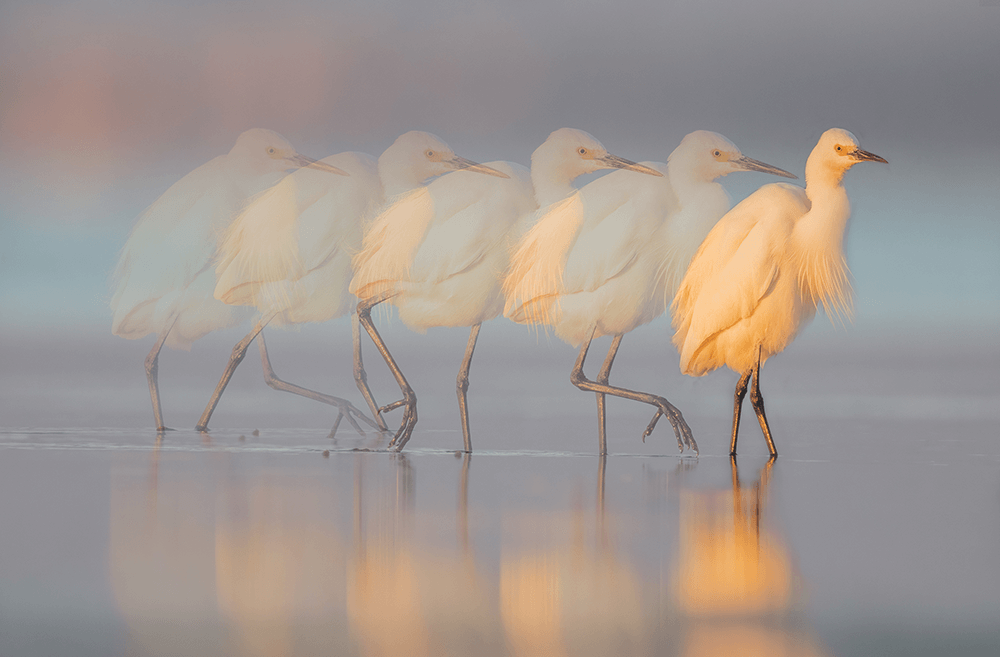 Egret Passing
“Like many photographers, I capture a series of images in a burst. With a fast enough shutter speed, motion is frozen, but light and the sensation of movement are often lost. The light at dawn on Mandurah estuary in Western Australia is beautiful, and I wanted the image to show the striding Little Egret as it passed through the still water and early morning light. I created the final effect with layers and transparency adjustments in Photoshop.“ 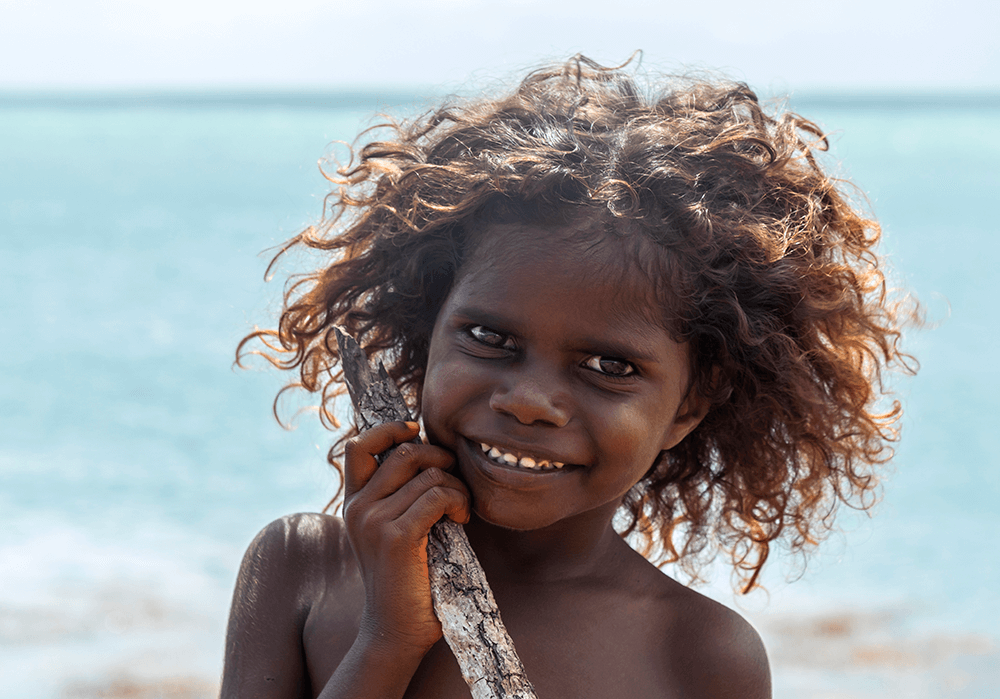 Baniyala Girl
”Last year before the borders closed I had the privilege of staying in a small homeland community " Baniyala '' in East Arnhem land for 10 days to photograph the nearby tourism opportunities. The people I met and the experiences I had will forever remain in my heart. This photo for me captured the wonderful connection they have with the land and sea.” 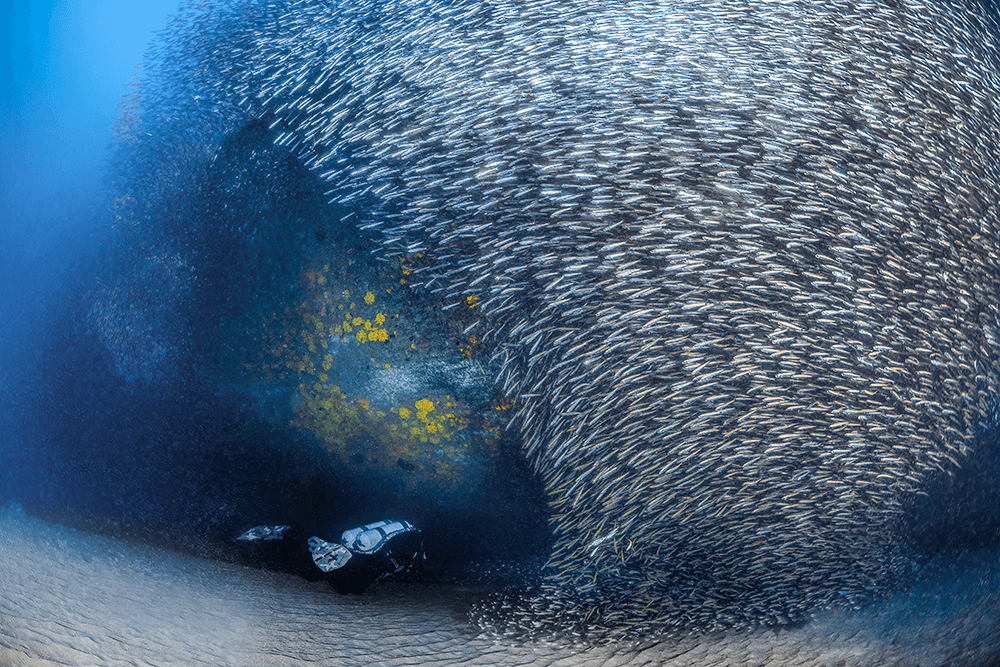 The ex-HMAS Brisbane Wreck
”A scuttled Australian Navy guided missile destroyer, the ex-HMAS Brisbane wreck is one of my favourite dives in Australia. It was on this dive where I fell in love with wreck diving and photography. During autumn 2020, as the world went into its initial Covid-19 lockdown, millions of fish descended on the wreck and large pelagic fish have also moved in to feed on them. Grey nurse sharks, manta rays, and eagle rays are all seen on the wreck, and divers in winter are treated to the beautifully haunting songs of passing humpback whales. ‘The Brisbane’ has become a powerful example of how warships can be repurposed as thriving artificial reefs for our most vulnerable marine life. Here my buddy Ian dives under the fish-engulfed hull of the ship. “ 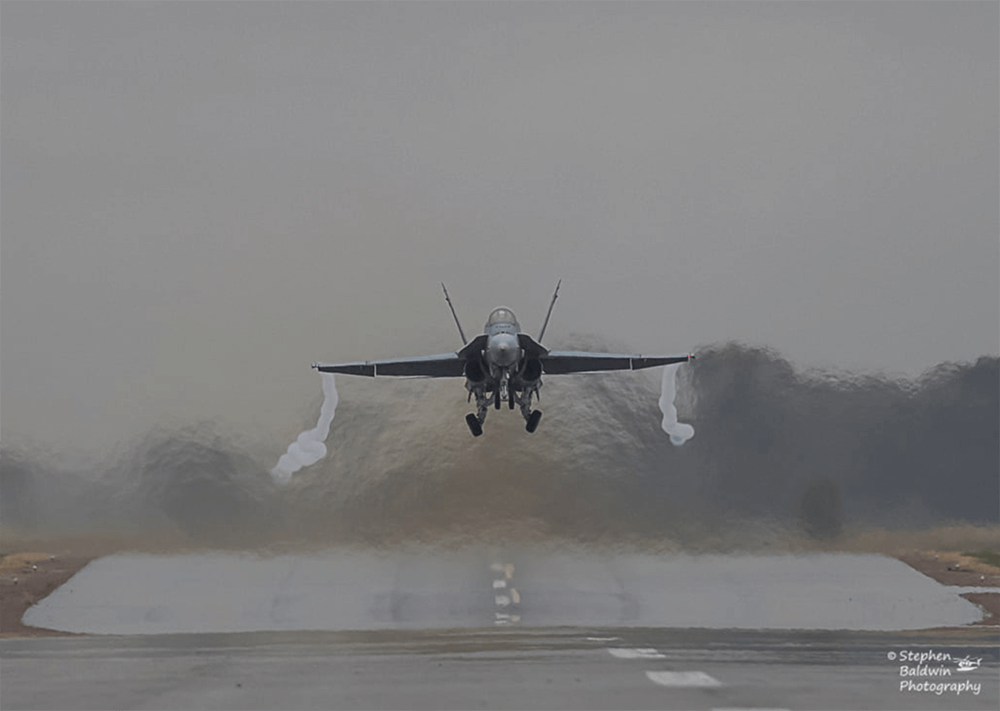 RAAF F/A-18 Hornet Departure
“This image captures the last departure of an RAAF F/A-18A Hornet from Temora, NSW on the 20th November 2021. This photo captured a piece of RAAF, Temora and Australian History. The aircraft was flown by RAAF Group Captain Jason "Easty" Easthope, Air Combat Group Chief of Staff. It was such a thrill to capture this type of image. The RAAF F/A-18A&B Hornets called Classic Hornets in RAAF service were officially retired from the RAAFon the 29th November 2021 after 36 years of service.” 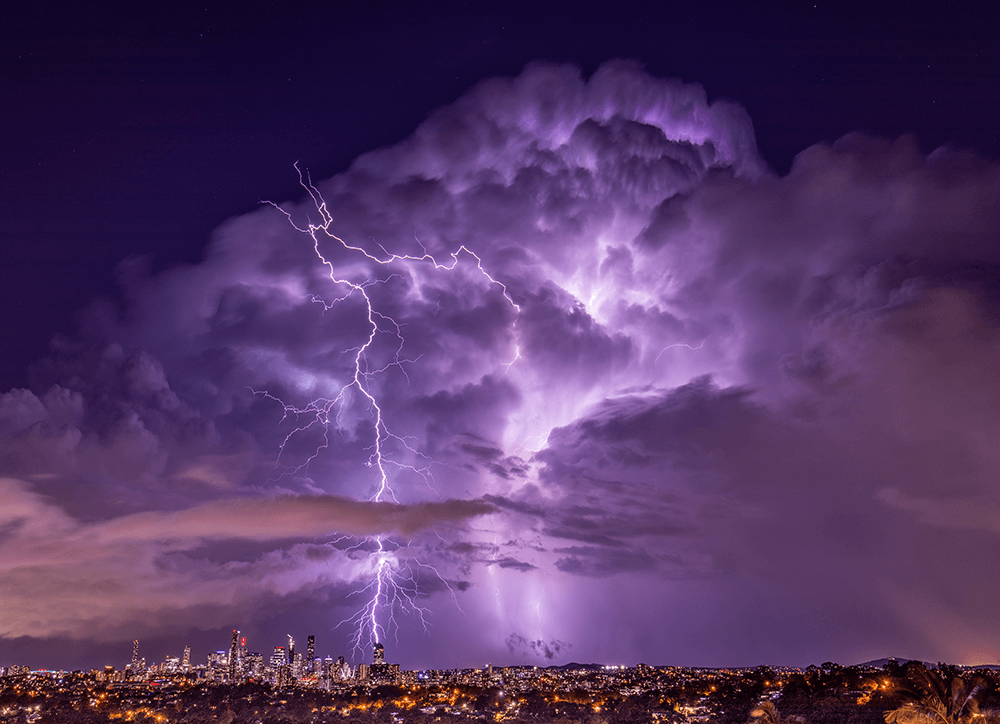 Brisbane Storm Season
”Every summer Brisbane experiences thunderstorms. Over the years I have learnt their typical direction and when to best photograph them. Some years the rain and lightning come together giving misty images, but occasionally the storms pass over my favourite city shooting location, the rain clears from the city and the lightning is crystal clear. In this image all the elements came together, along with a great cloud formation to produce one of my best storm photos.” 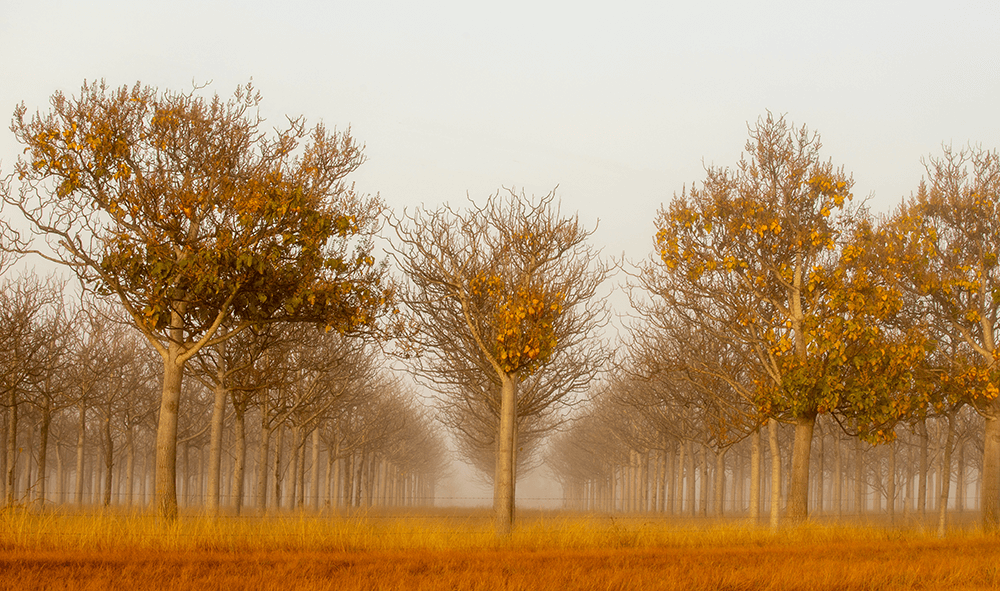 Winter Orange
“As photographers we are always capturing moments in time and some of those moments are fleeting. This stand of Paulownia Trees were located between Kingaroy and Kumbia in the South Burnett region, Queensland. Paulownia is a fast growing timber which is light in weight and colour. These trees are no longer present as the landscape changes so it was a one off moment in time. I took this photo early on a cold misty morning after eyeing them up for some time as something special. I was lucky the way the mist and orange glow from the sunrise made a magical scene to capture these trees. “ 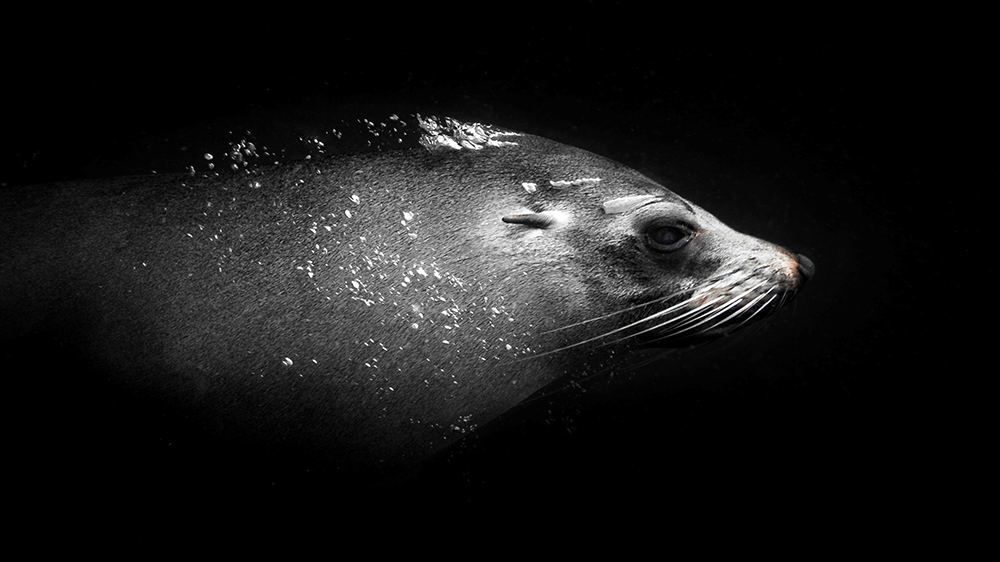 “Taking photos of fast moving fur seals can be challenging to say the least! I find the seals more engaging when I choose to free-dive with them rather than use scuba gear.  My plan was to try and shoot a series of black and white profile images of the seals, and this one was my favourite from the day.  Bubbles were peeling back off its face as it shot past me like a bullet from a gun. “ 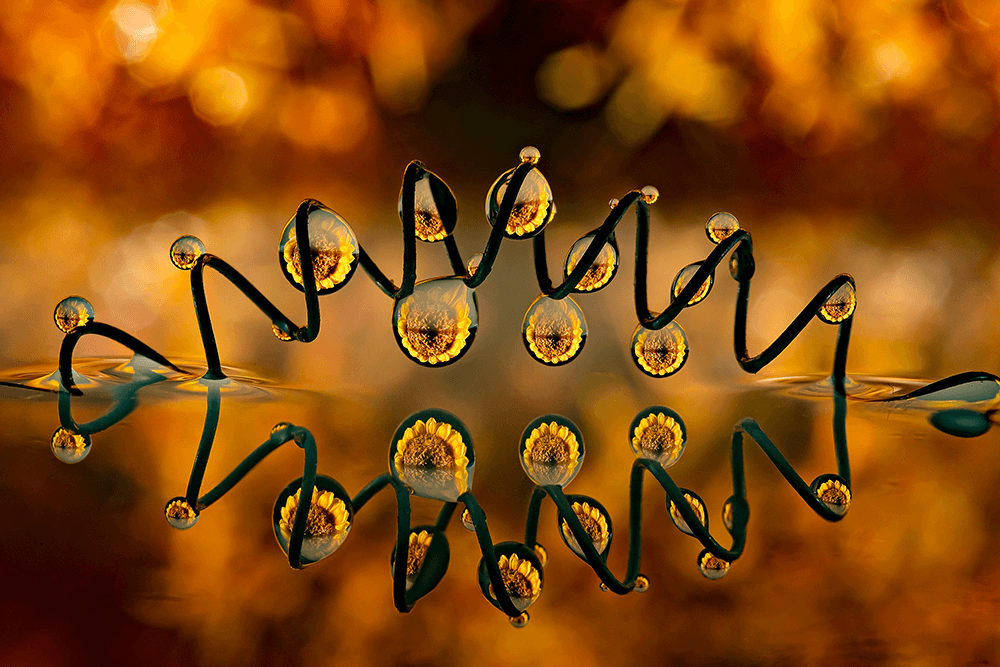 Spring Loaded 2
“Using a few simple ingredients from around the home I put together this scene on my kitchen table. A mixing bowl full of water , a spring from a ballpoint pen and a fake flower half submerged in the water for the background. I used a hypodermic needle to place droplets of water onto the spring and focused on the refracted flower inside the droplets. Getting the droplets where you would like them is a challenge and it can take some time to build up the scene especially with shaky hands! I placed flash to illuminate the background (flower) so the whole scene is in backlight. I really enjoy creating these images at home and the challenges that come with it.”