/ Get Inspired
/ Champions
/ Celebrating the Best Images of 2020 From Our Community
Feature Image by: Calan Rance

Celebrating the Best Images of 2020 From Our Community

It goes without saying that 2020 has been a unique and unpredictable year. Despite the challenges, our community continued to inspire us by capturing and sharing the moments that mattered to them.

In no particular order, here are the stand out images from our community this year. 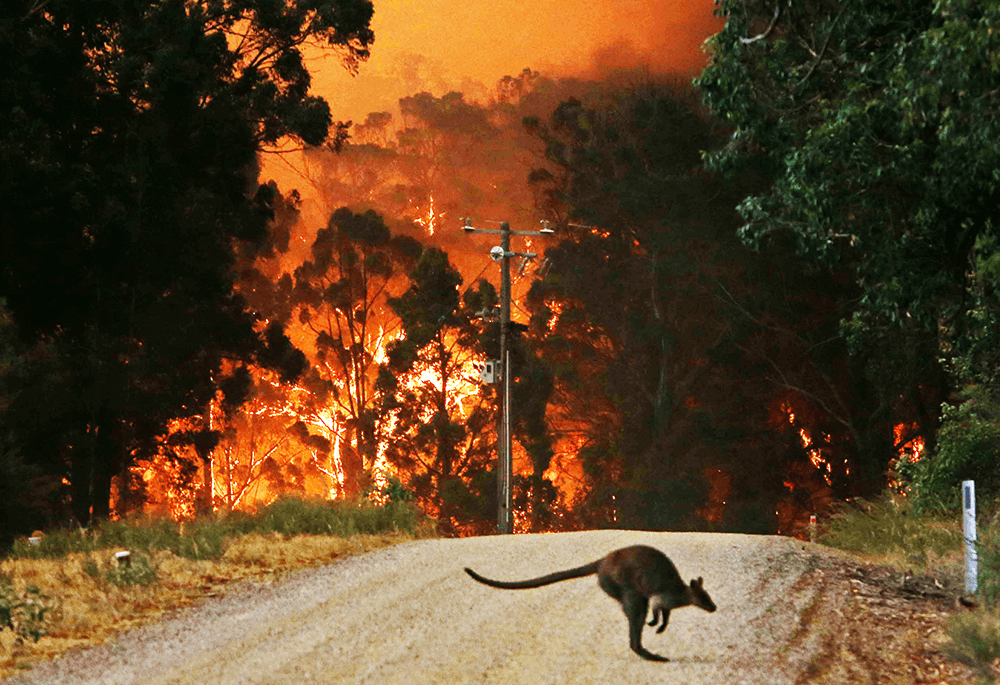 “I was assigned to East Gippsland to cover the fires early last week. Due to the immediate fire danger most roads had been blocked off but by a sliver of luck I found myself in Bruthen where two major fires were burning in different places. I noticed a CFA strike team assemble on the Great Alpine Road near Sarsfield and I waited close by to see how they would react to one of the coming fire fronts near the small community. As the plumes of smoke got closer, there was a sudden flurry of activity with both the fire crews and aerial bombers. As the teams went to work, I could see the glow of fire in the distance and I set off on foot to get a better look. Walking down a dirt track I heard the distant stomping of a wallaby making its escape and I literally shot from the hip and took this picture as he escaped the heat and flames that were approaching.⁠ ⁠

I’ve never seen a wall of fire like that before and I certainly have never experienced the heat. I was a few hundred meters away and I could feel my face burning from the heat. The wind changed, and I made a hasty retreat. It’s one thing to tell the story but I wasn’t prepared to put my life or any of the emergency crews’ lives in danger. Many properties were lost in the small community that day but in the street where I was located, all properties were saved. I was amazed by the bravery and dedication of the CFA crews who do what they do to save lives and property. I have the utmost respect for all who volunteer their time and lives for the common cause.” 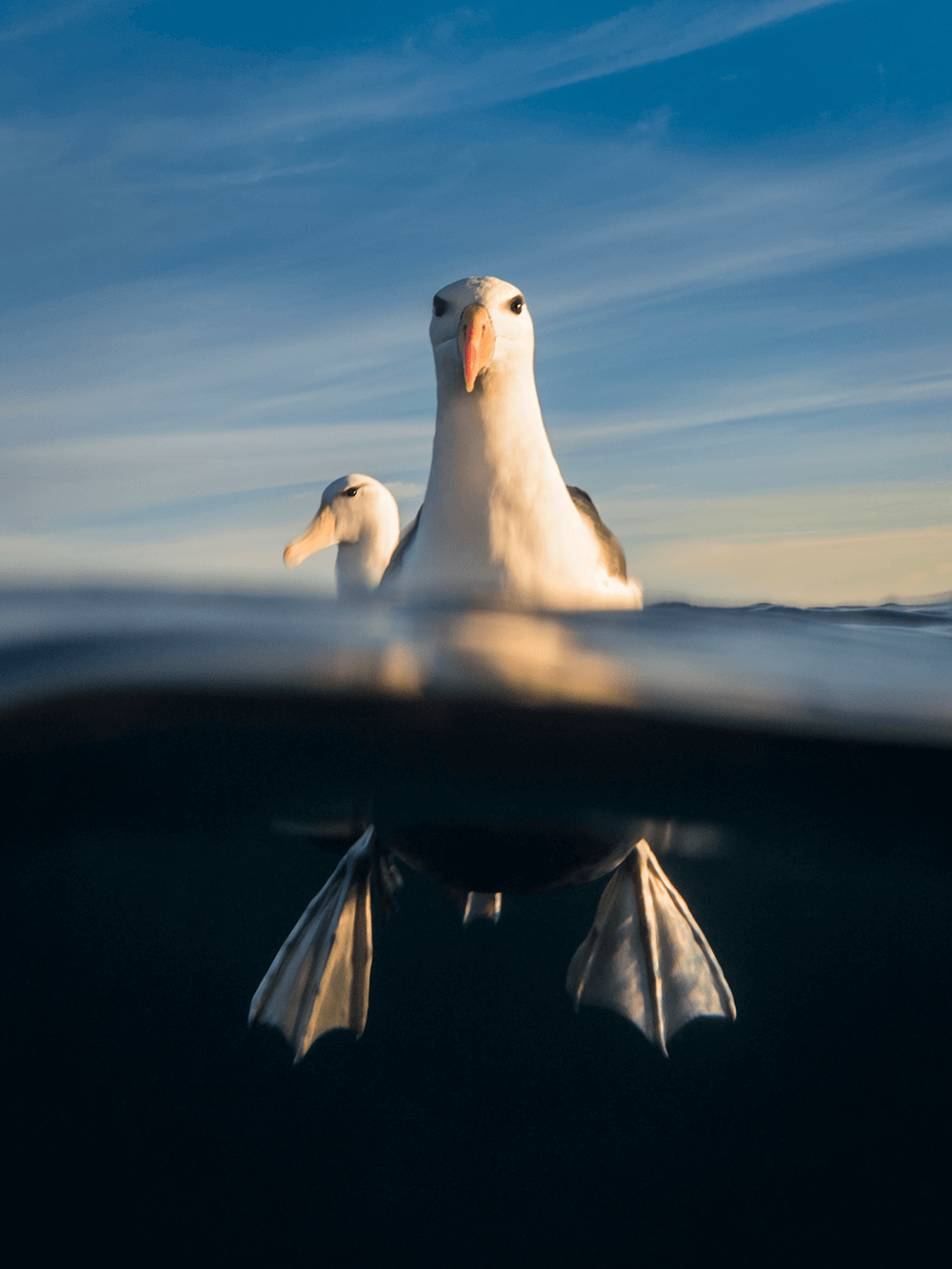 “A mate and I were about 3 kilometres offshore in the Tasman Sea, out off the Bay of Fires in Tasmania doing a bit of fishing and were on the lookout for any Dolphins to dive with. These two majestic Black-Browed Albatross were hanging out behind our boat hoping for a sneaky feed from our fishing catch, so I slipped into the water, put some fresh fish on my head and sure enough, this amazing Bird came right in allowing me to add one of my favourite shots to my Albatross split shot collection. I love how the feet were front and centre and how the bird was staring straight down the barrel of the lens.” 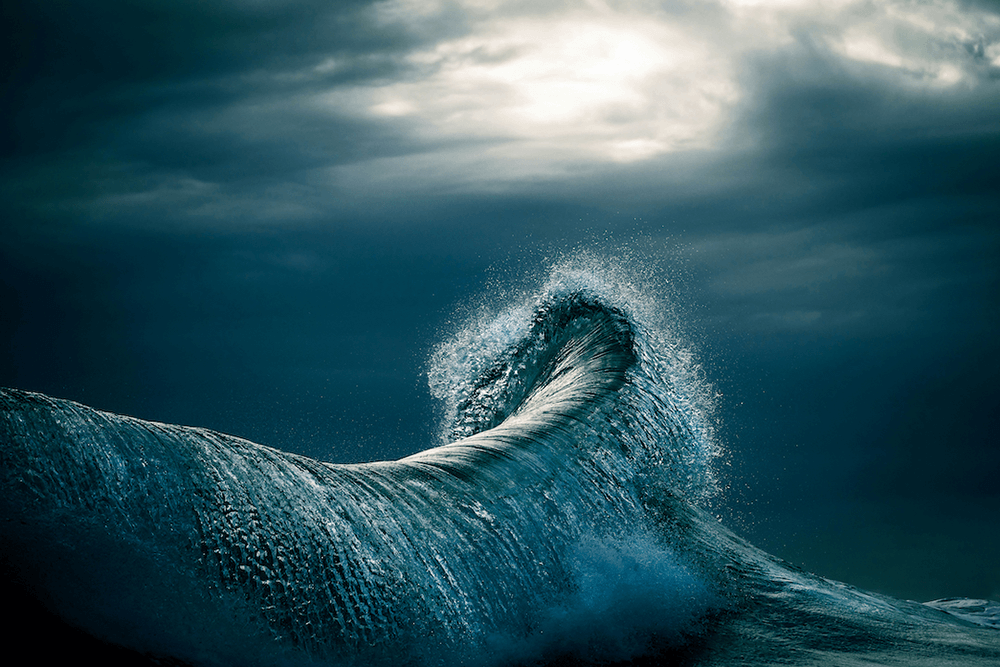 “The trip to Antarctica was a once-in-a-lifetime opportunity gifted to me by my mother. Before traveling to Antarctica we spent 3 weeks in South America, mainly in Peru – but the main purpose of the trip was an Antarctic cruise which leaves from the Argentinian city of Ushuaia, the southernmost city on the planet. I saw this as an opportunity to capture images that many dream of but few have the ability to. I say this with absolute gratitude. This experience was truly incredible and some of the best memories I have in my life.” 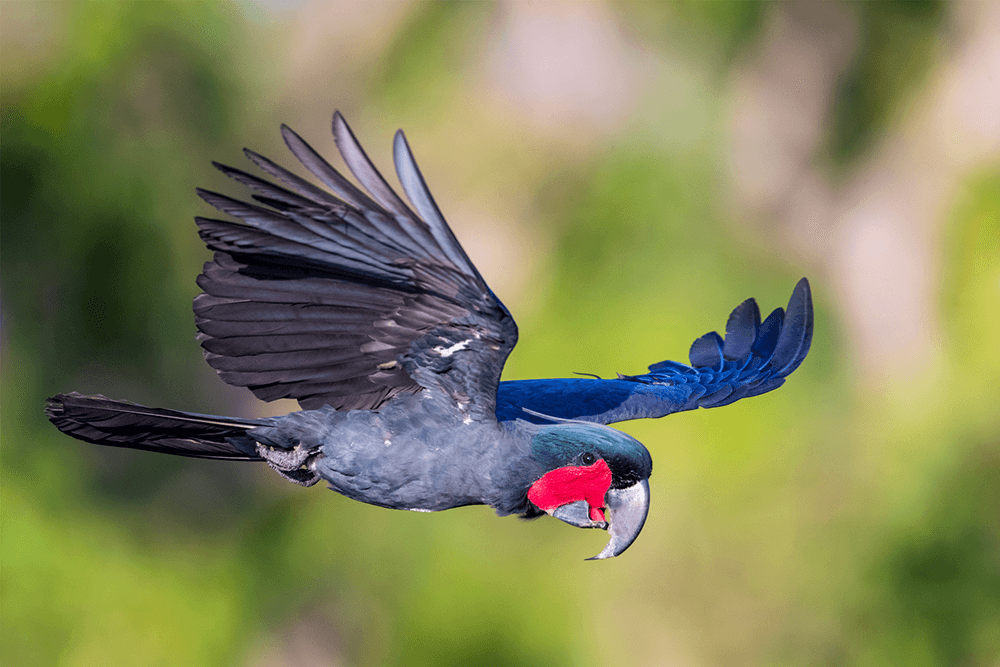 “One of the most challenging aspects of bird photography is capturing them in flight.⁠ To get an amazing photo you not only need to work out where the bird will be flying but also lighting and camera focus on the birds eye.⁠ It took 3 days of observing their early morning behaviours to set up this shot of the Palm Cockatoo in flight.⁠” 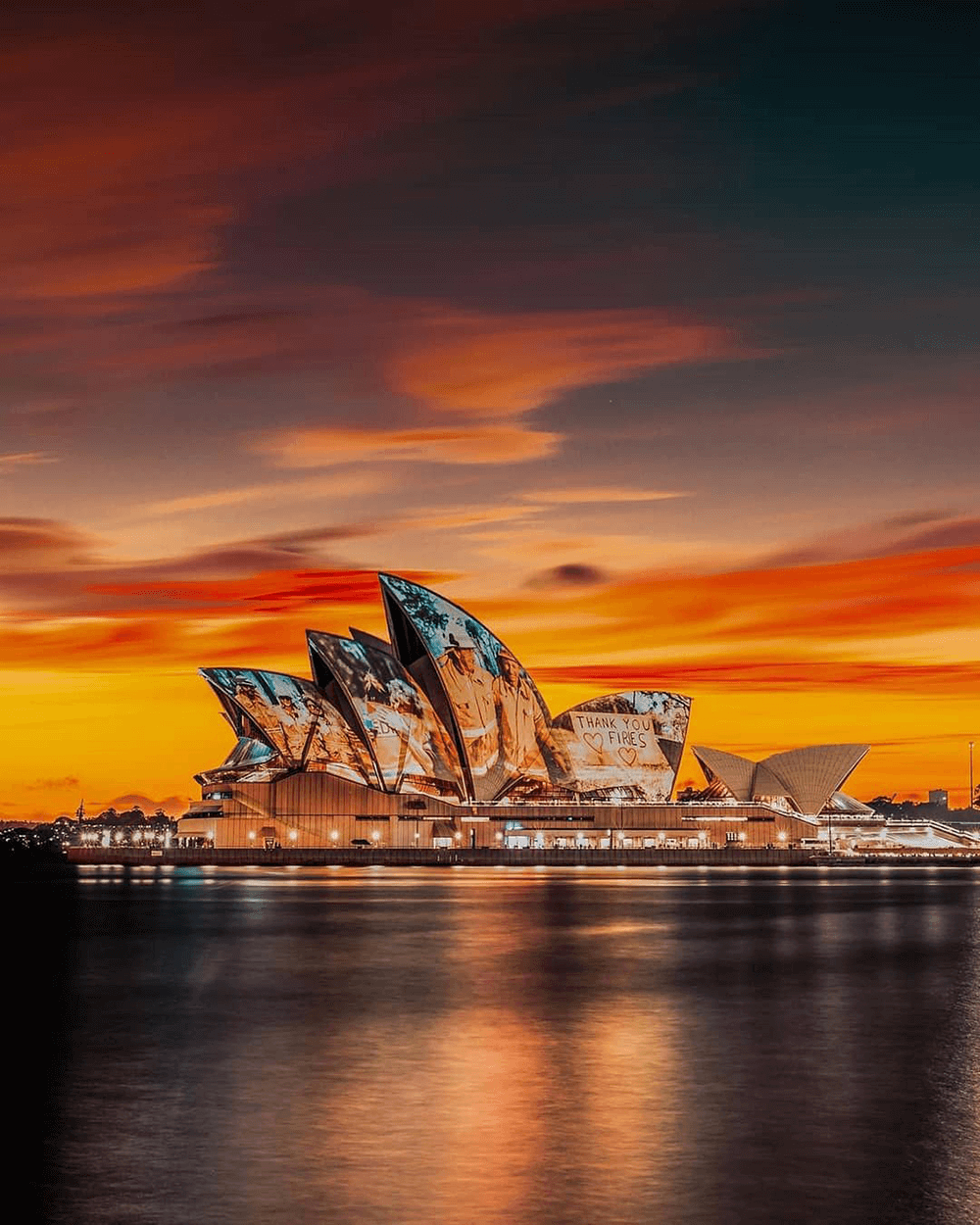 “A massive thank you to our career, volunteer and international fire fighters for battling the blazes of this great land - Australia. We thank you for all you have done and are doing for our poor country. A tribute light installation is currently being projected on the Sydney Opera House.” 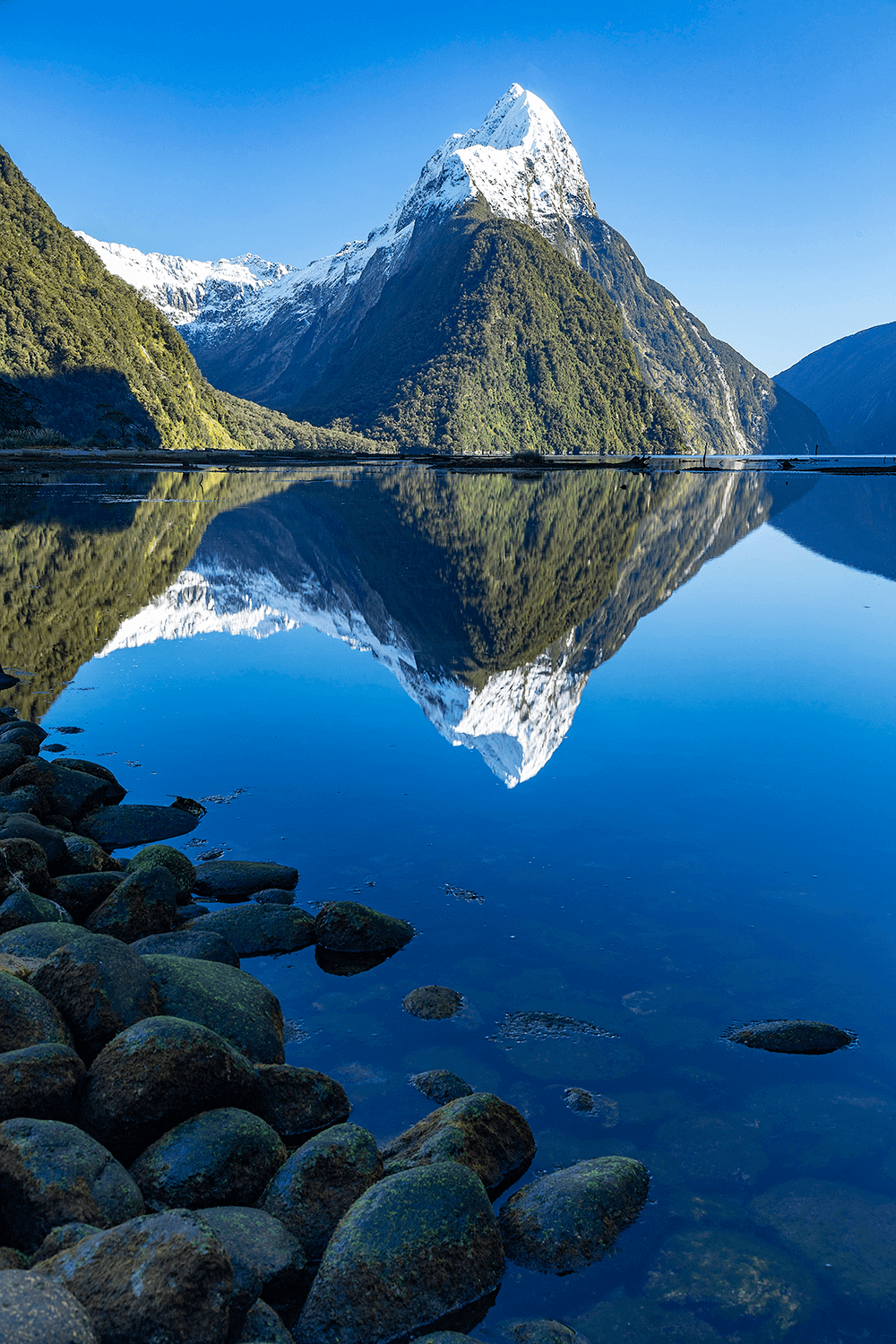 “As a landscape photographer, I'm always wanting those vibrant colours in the sky at sunrise or sunset but a lot of the time you don’t succeed in that mission. Sometimes you get something unexpected, the enjoyment of it, the range and variety of nature in front of you at different times of the year. Last August I was in New Zealand getting up early to drive from Te Anau to Milford Sound. Arriving in the dark, and never had visited there before, trying to find a location to shoot from which is hard when you don’t know the lay of the land. No cloud cover… which I don’t enjoy, but on this occasion, I was happy to let that slip. Without a breath of air, the water began to rise and cover the mud and rocks that are visible at low tide. The reflection was just perfect.” 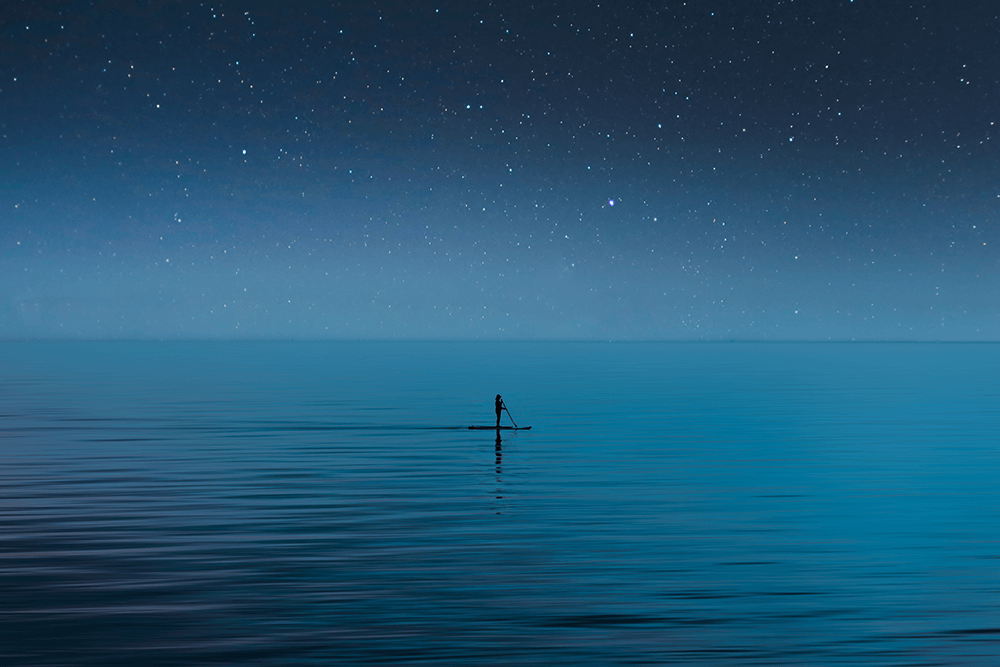 “Simplicity is a beautiful thing. Utilising negative space and very few compositional elements, the photographer has the potential to create an image with impact. I find minimalist photos evoke an emotional response, reminding me of fond memories or experiences.” 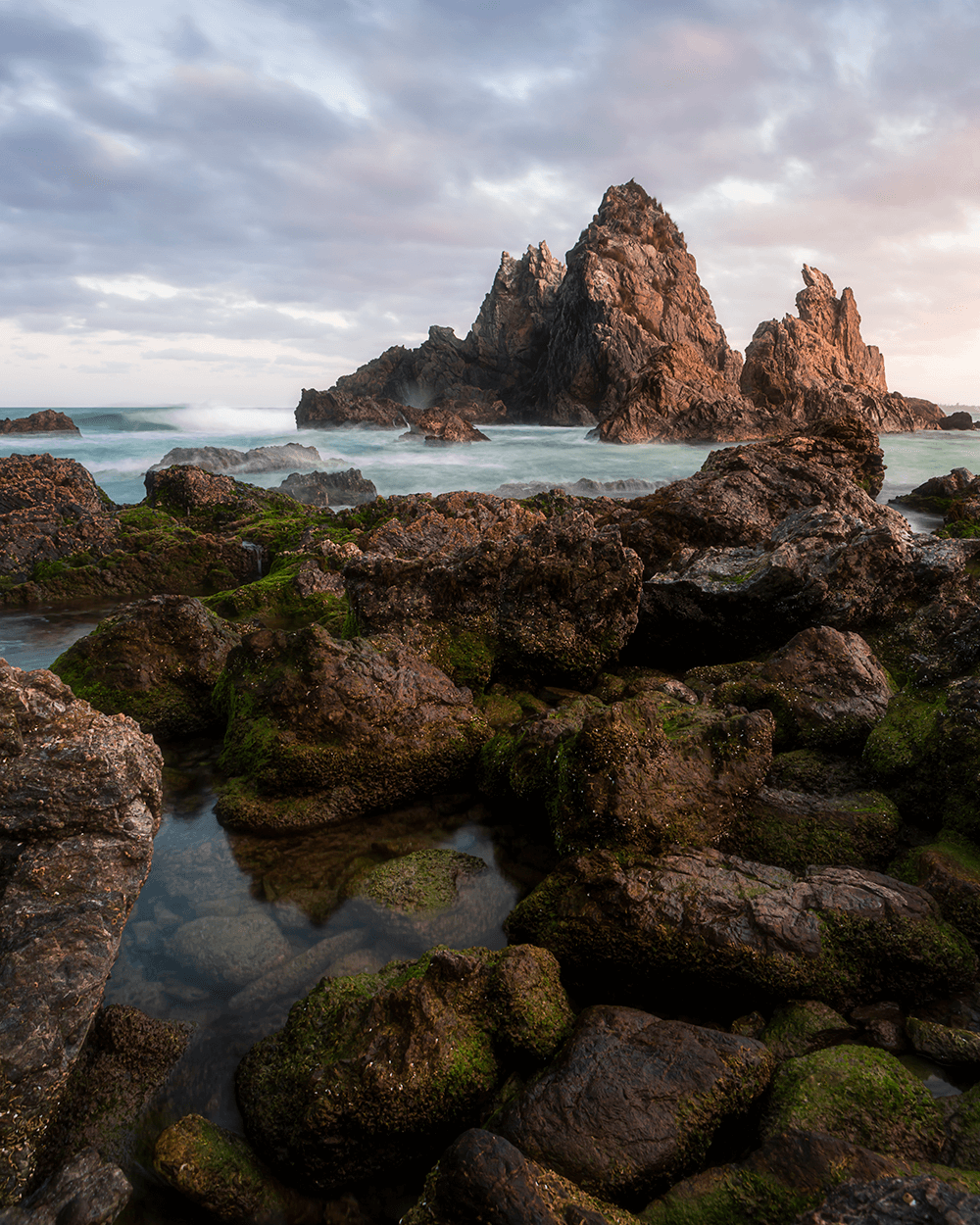 “Since taking to seascape photography in my spare time, I’ve come to notice how diverse and rugged our Australian coastlines are. Something I would have walked right by in my younger years, now presents a much different dynamic when looking at it through a lens. Through millions of years of erosion there is so much beauty to be photographed that Mother Nature has to offer.” 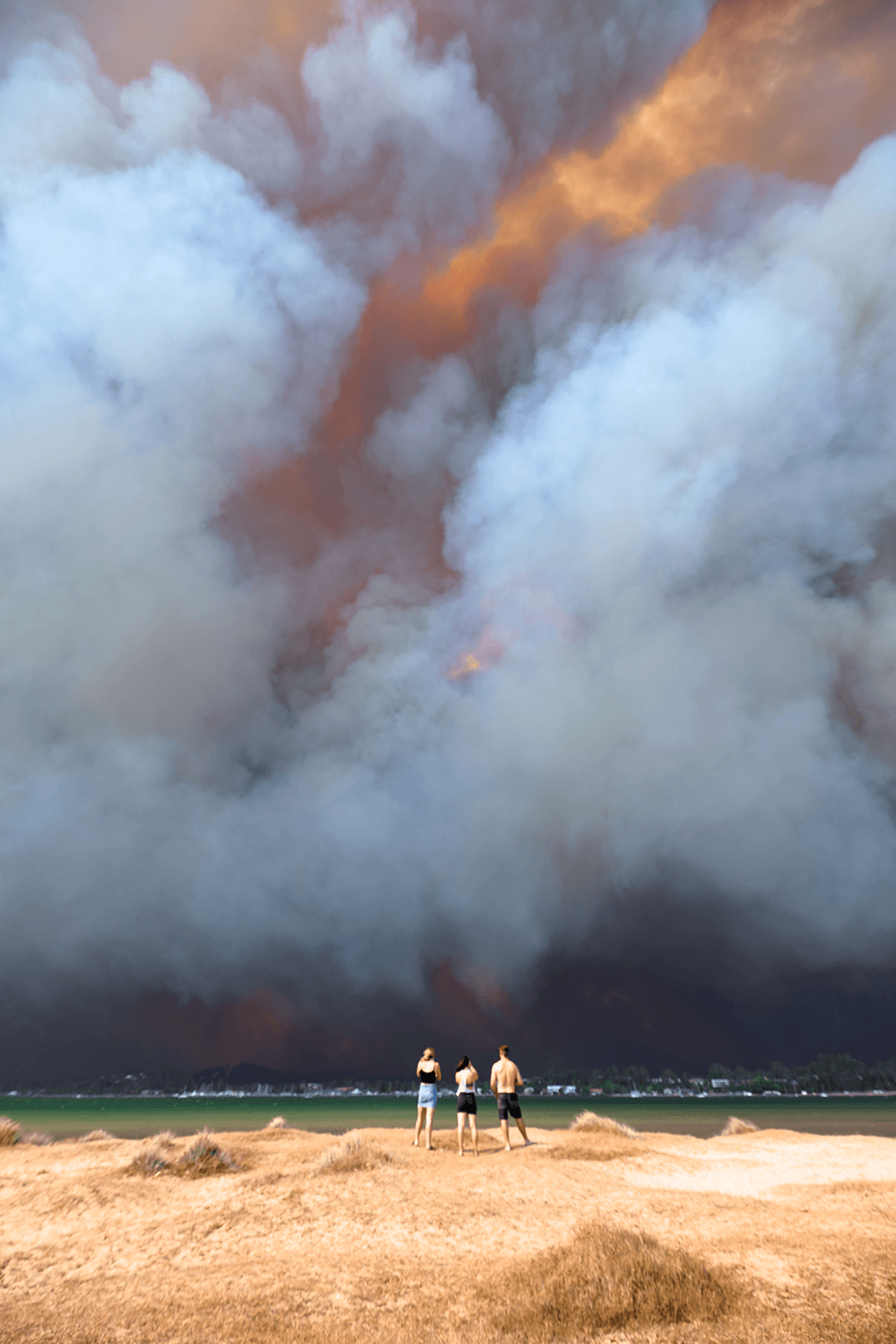 “NYE 2019 9.30am.⁠ The view of Batemans Bay from Surfside NW of Pinnacle Point. ⁠We had evacuated Catalina at around 8.30am after watching flames rip over a ridge behind us from the kitchen window. Having a deep respect for how fast things can escalate with wind and fire, there was no hesitation to leave. We decided to cross the river with hopes that Surfside would provide a safe distance from the flames. We pulled up and walked onto the beach with utter disbelief in what we were witnessing unfold across the river.

Massive plumes of smoke bellowing into the air, explosions, and several helicopters hard at work on an area in Catalina that we would later learn lost many houses. Heartbreaking. ⁠We found some shade in an attempt to shelter from the heat of the sun as the temperature was already soaring even though it was still early morning. We knew it was going to be a very long, uncomfortable day.⁠ Red faced and thirsty, an offer for refuge in a near by house was happily accepted.⁠ Little did any of us know however, that the most terrifying experience, possibly of our lives - was yet to come.” 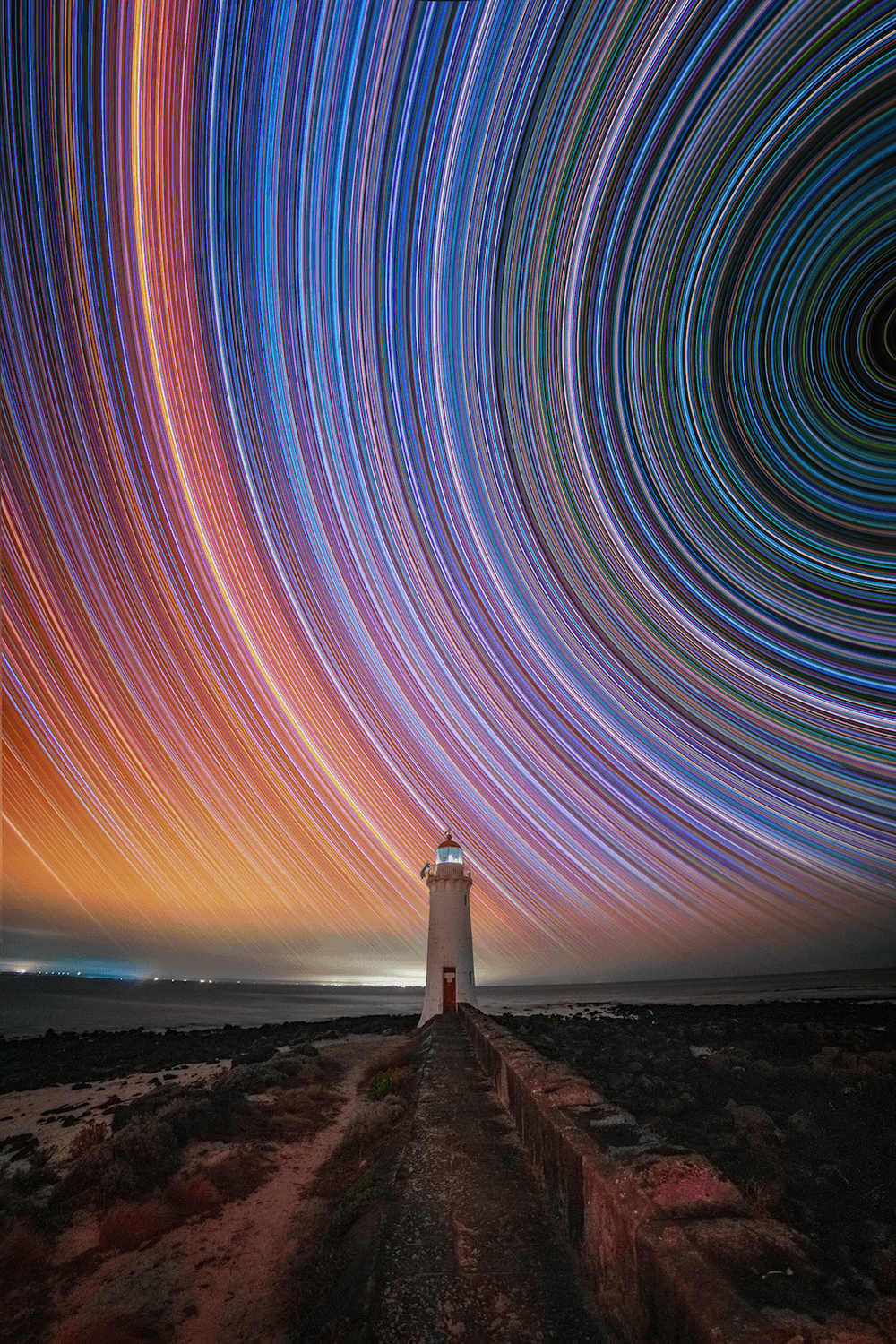 “I do a lot of astrophotography and at home I can practice and experiment with the settings on my camera. The key is getting to know your camera. And you can use any equipment as along as it has manual settings.” 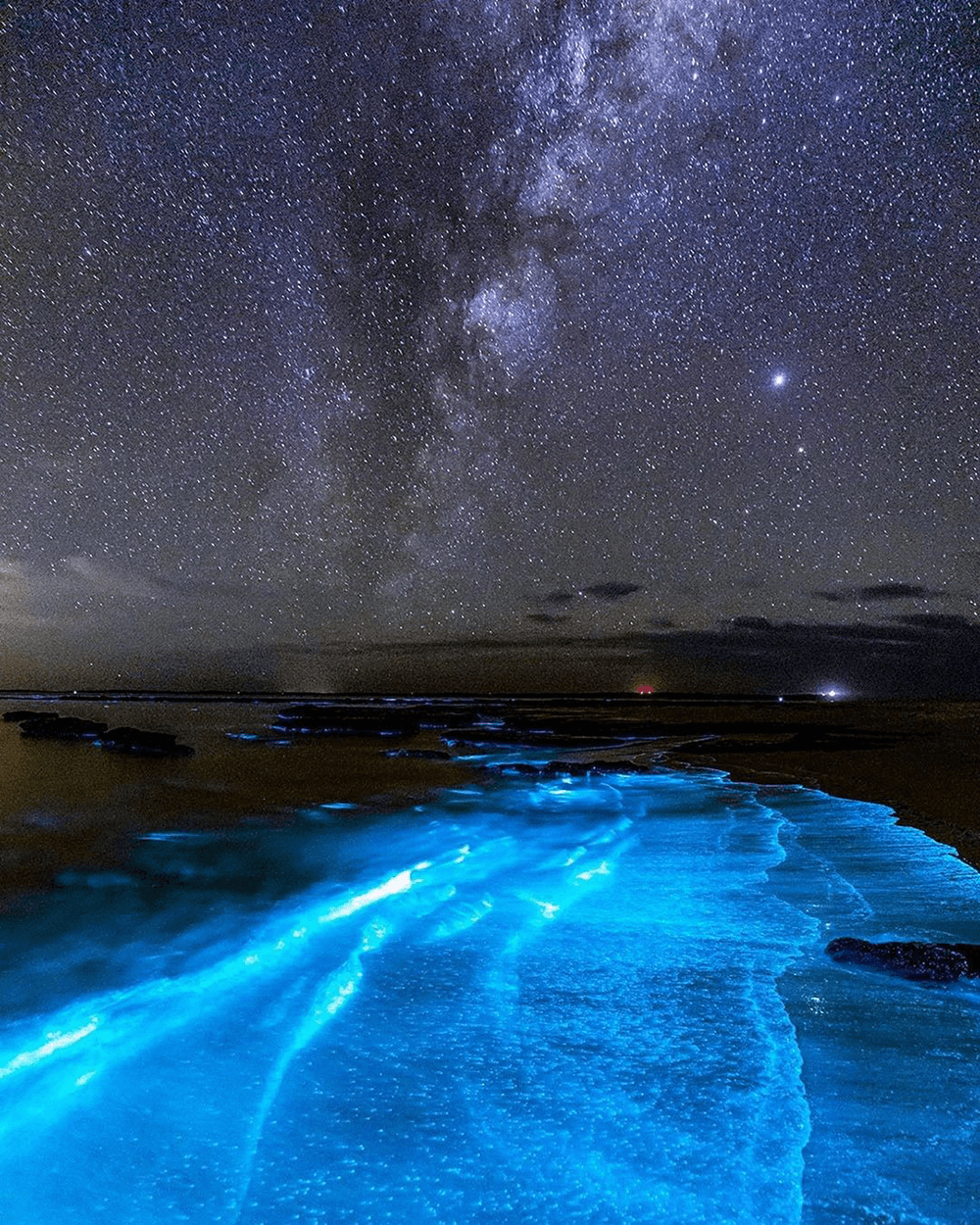 “The shots were taken on Anzac Day 2020. During my afternoon walk I saw some bioluminescent algae in the water at one of the local beaches. As soon as it got dark I grabbed my camera gear and tripod and headed back down to the location where I earlier saw the bioluminescent algae. As I turned the car headlights off and looked out across the water I could see a faint flicker of blue as waves lapped against the shoreline. I instantly knew I was in luck. ⁠ ⁠

On this particular night all of the stars aligned, literally. It was a clear night with no cloud, the Milky Way was in the lower region of the sky and the bioluminescent algae was thick in the water. I stayed out till 4 in the morning capturing a variety of different angles and only went home as my last battery ran out of charge.⁠” 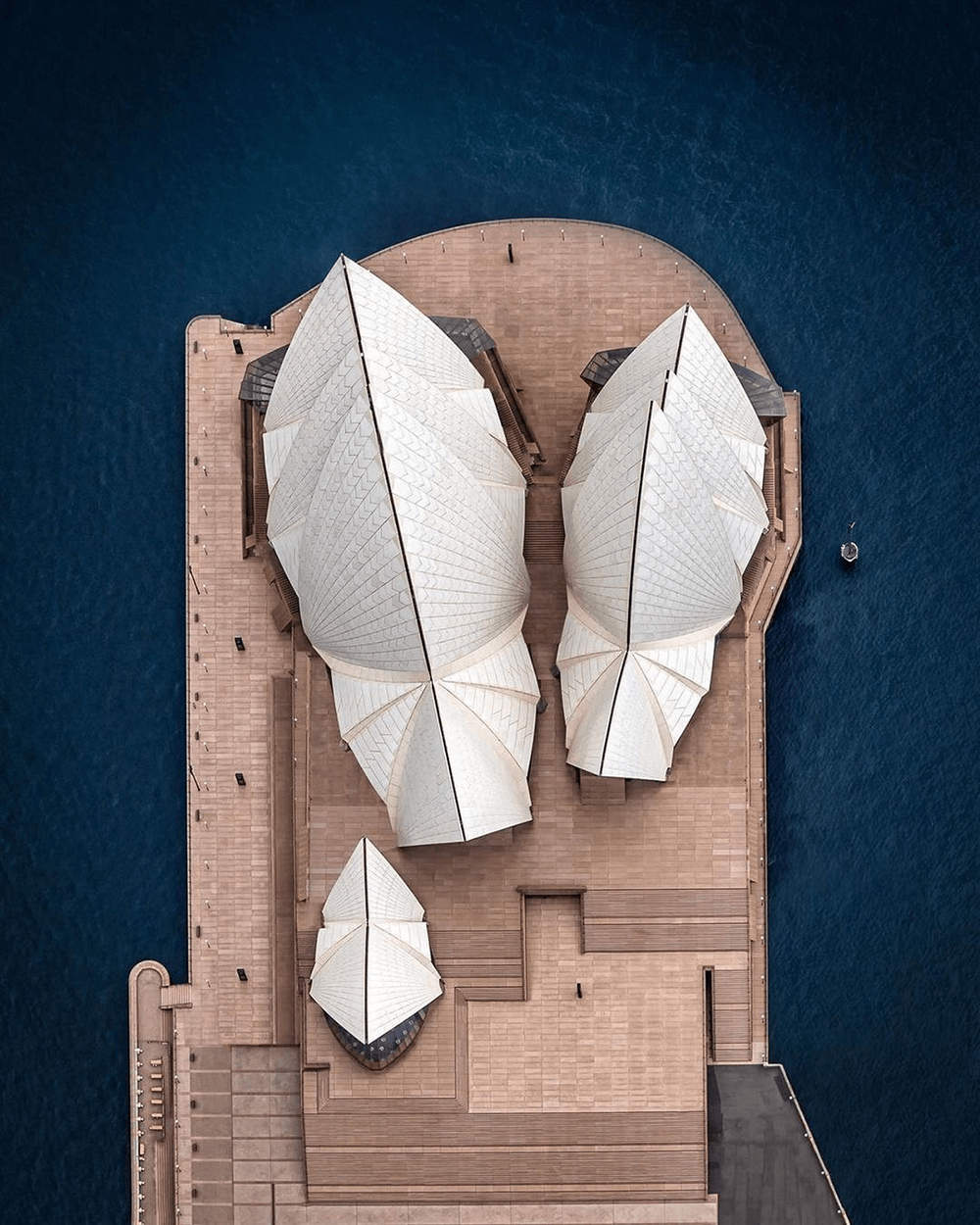 “Ever since I moved to Sydney I have dreamt to take this alternative angle of the Sydney Opera House. After a failed first attempt due to the weather late last year, the bushfires and then Covid delayed me being able to go up again. When I finally made it, it wasn’t the clear day I was hoping for but rather drizzly and overcast. In the end I think I like the moodiness of the harbour water as it frames the Opera House nicely.” 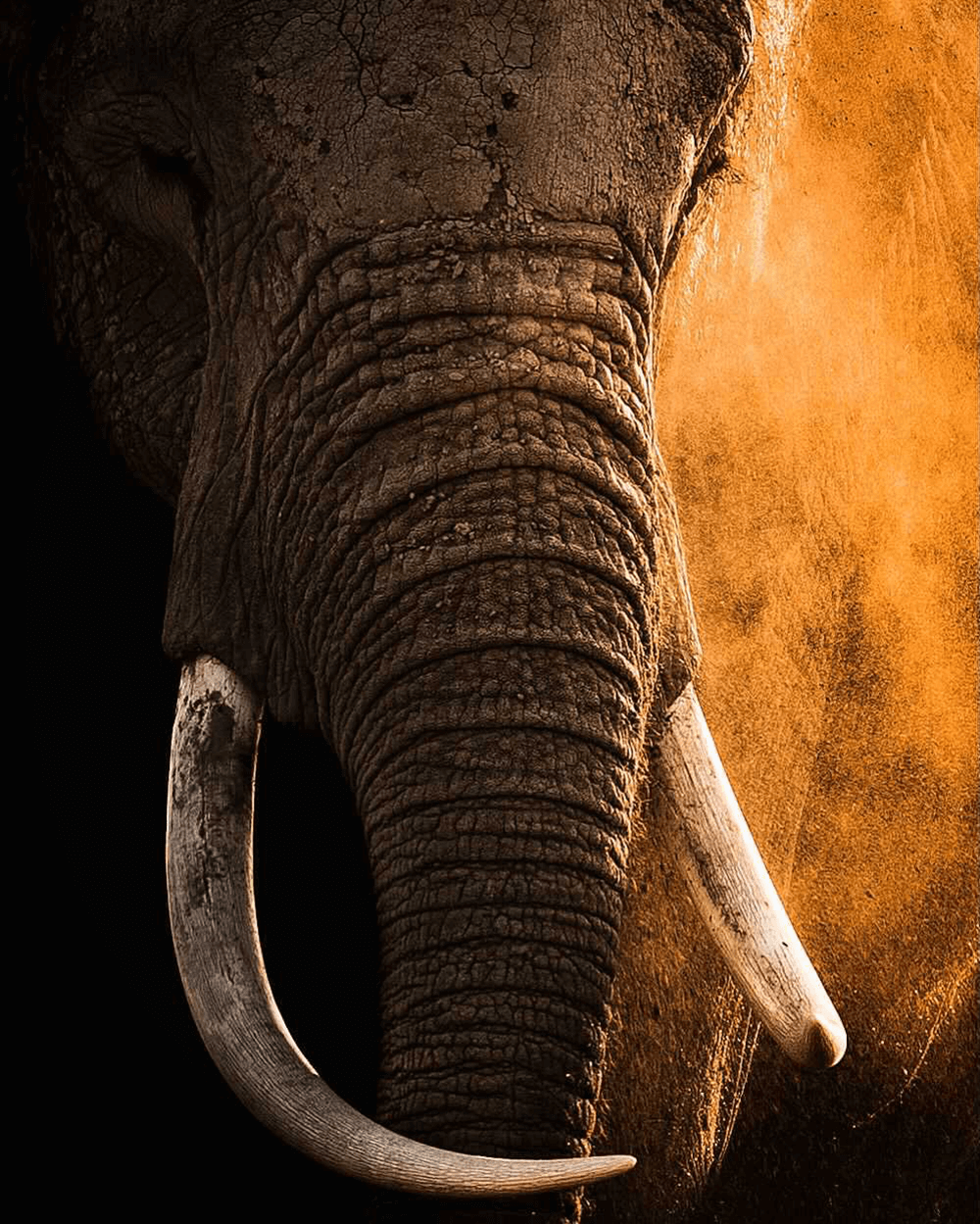 “Light is one of the most important elements when it comes to not only wildlife photography, but most genres of photography. For my work, I love photographing early morning or late evening when the colours are at their best — there is nothing as beautiful as golden light or backlit dust to bring out your subject. Juxtaposing light and shadows is an incredibly powerful tool.” 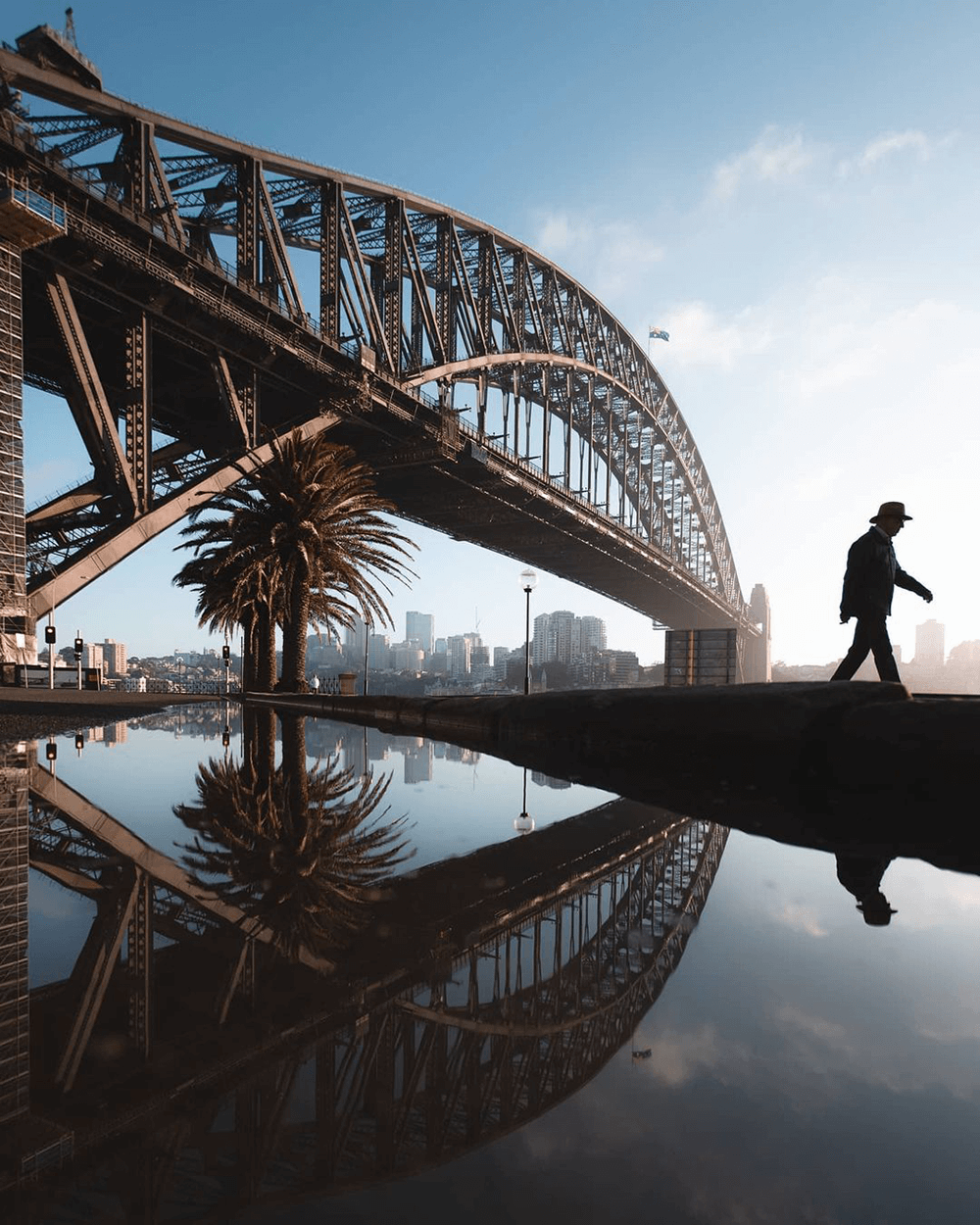 “One style of photography that I really love is capturing reflections. You only need a small puddle to make it happen but the results can be amazing. The key is getting your camera as close as possible to the water and use your widest angle lens, and then it's all about framing, so I shoot in live view and use the flip-out screen to get the composition right. Wait for the subject to enter your frame and fire away!” 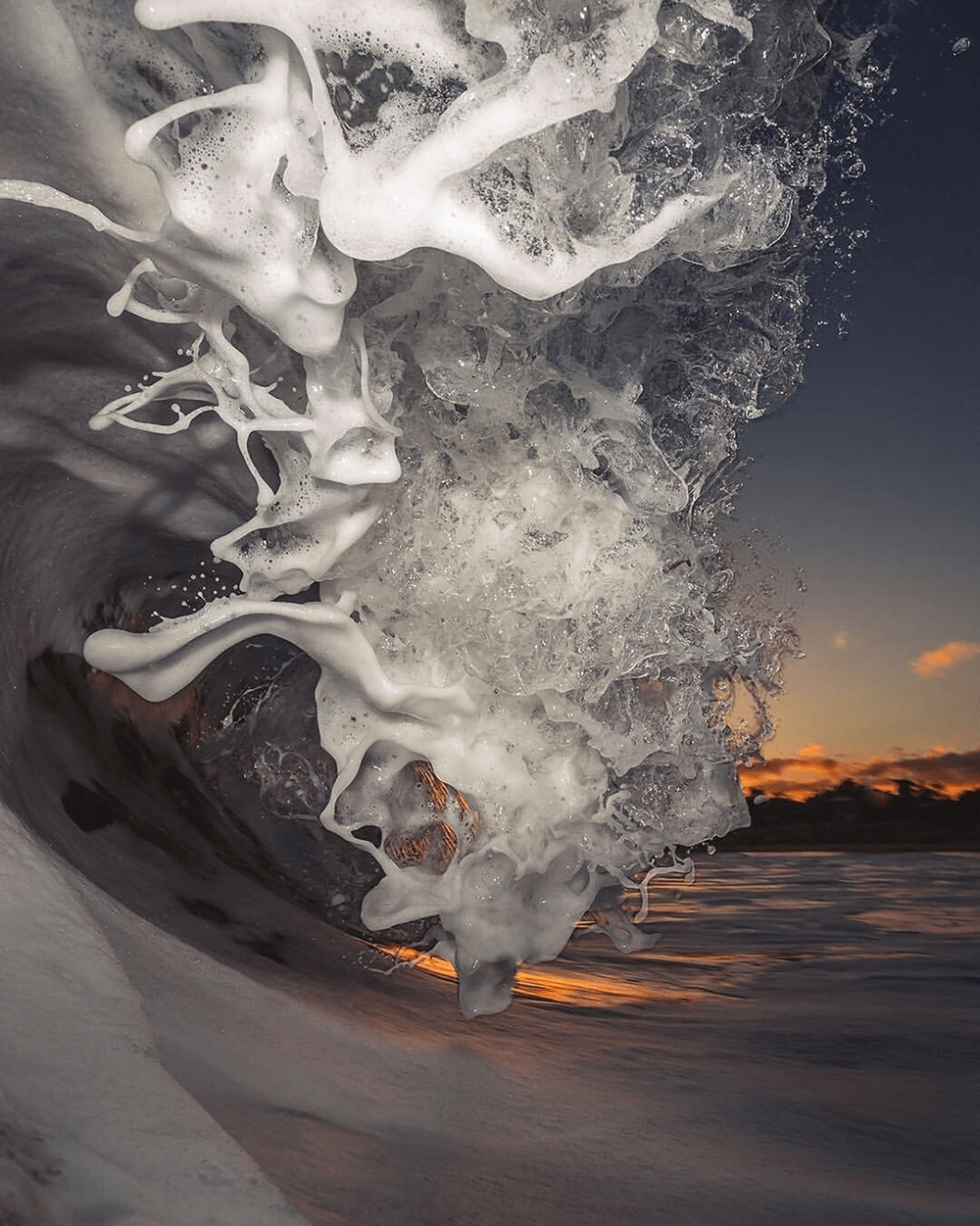