David Rogers is a passionate photographer from the small coastal town of Tathra whose work we stumbled across when one of his images went viral for its bioluminescent beauty, and since then we've been hooked. We spoke to him to get his explanation of what bioluminescence is, and his tips on how to capture this intriguing performance of light.

“Bioluminescence is one of the most beautiful displays light from the natural world that you can witness. The iridescent blue light emitted from the algae when it is disturbed is mesmerising and almost otherworldly.” 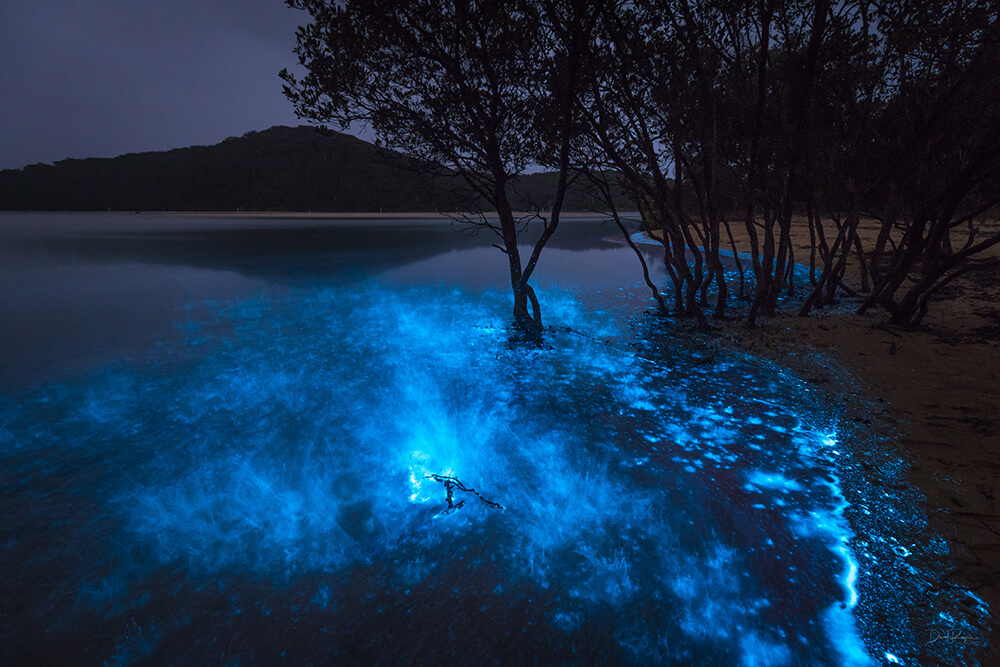 What do You Usually Shoot?

Tathra (which is on the Sapphire Coast of NSW) is mostly unspoilt coastline consisting of rocky headlands, pristine beaches, saltwater lagoons and river estuaries. Showcasing the variety of natural beauty in this area is my current photography focus. My work is generally raw and moody seascapes with lots of low atmospheric light and dynamic water flow. In winter, I love shooting astrophotography—especially being so far away from any light pollution.

In September 2018, the Sapphire Coast was fortunate to experience a rather large and rare bloom of bioluminescent algae. One particular photo I took of this phenomenon received a lot of attention on news channels and social media sites around the world. The photo shows a mesmerising display of glowing bioluminescence set in the tranquil backwaters of a coastal lagoon. The photo was nominated by both Tourism Australia and Canon Australia as one of their most engaging photos of 2018.

I would like to think I was very lucky getting this shot however the reality is that it was careful planning, extensive research, open communication with other photographers, understanding the local landscape and learned experience of shooting in low light conditions that led me to this photo.

‘Sea Sparkle’ is the common name for the natural phenomenon of Noctiluca, a marine dinoflagellate. Marine dinoflagellates are single-celled organisms like plankton, that float on or near the ocean’s surface. They are subjected to movement by wind, meaning a gentle breeze will concentrate these organisms against shorelines or within protected coves. Consisting of a single species, Noctiluca scintillans is one of the most commonly occurring bioluminescent organisms on the coastal regions of Australia. This fascinating microalgae emits a bioluminescent blue glow when disturbed at night. Like most bioluminescent organisms they have an inbuilt biological clock that indicates the time of day. They never glow during the daytime, even if put into a dark space. During the day the thick blooms of Noctiluca appear as a soft pink haze on the surface of the water and is alternatively referred to as “Red Tide”. 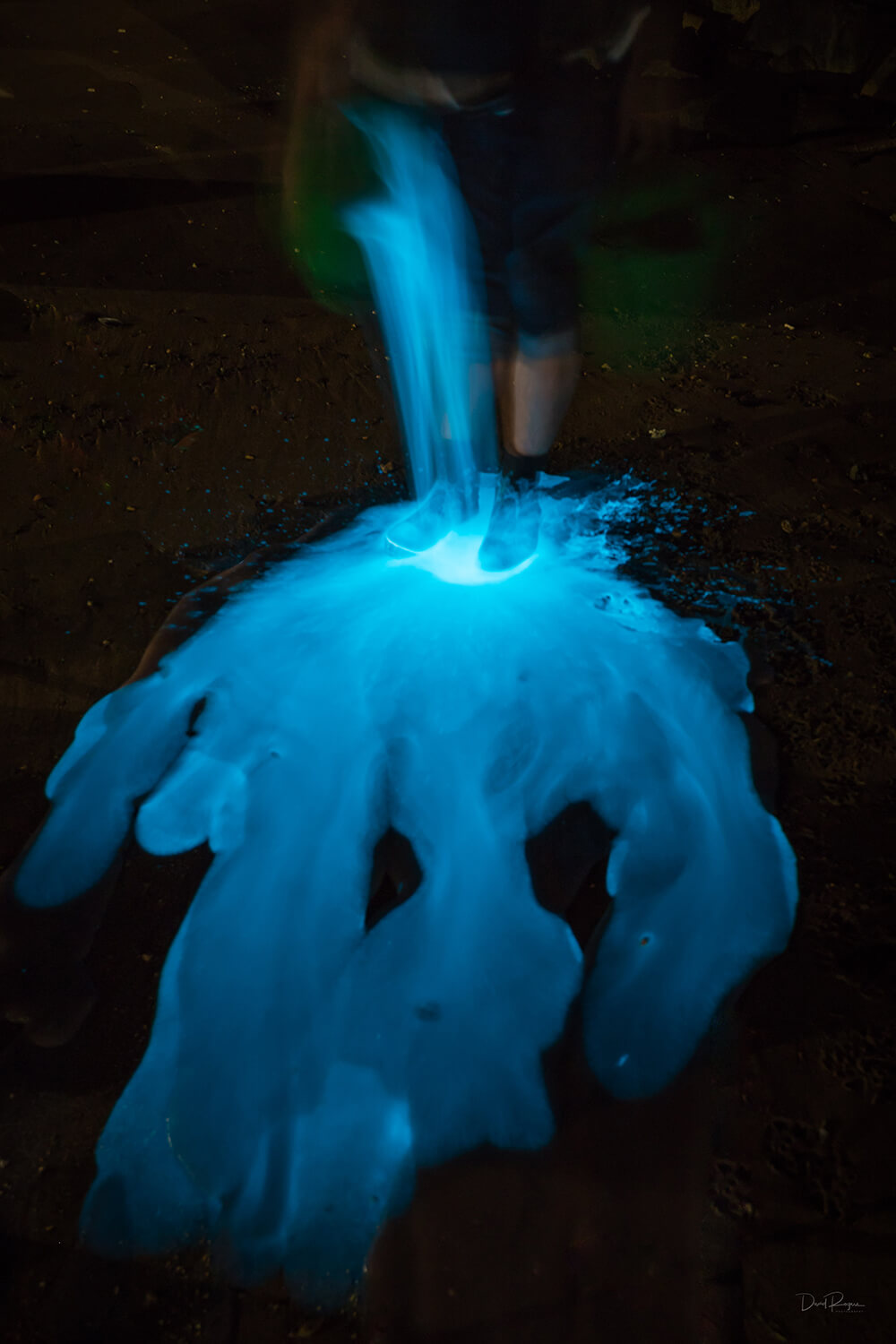 One of the biggest challenges of shooting bioluminescence is actually finding it. It is not a regular occurrence in any particular place or at any particular time. It only flourishes under specific environmental conditions which are still not fully understood by marine scientists. Although these blooms are rare and random, there are certain hotspot locations where appearances are more frequent. Certain locations are more susceptible to the algae being deposited at wind and tides. Some hotspot areas in Australia include Jervis Bay NSW and Southern Tasmania.

The lifespan of the algae is relatively short (approximately 48 hours) leaving only a brief window to witness this rare event. To capture this phenomenon you need to be prepared.

I was alerted to the bloom by friend and Landscape Photographer, Luke Tscharke, who is based in Tasmania where bioluminescence is often found along the east coast. A sighting on the Sapphire Coast was reported on the Bioluminescence Australia Facebook Page and Luke kindly shared this report with me. 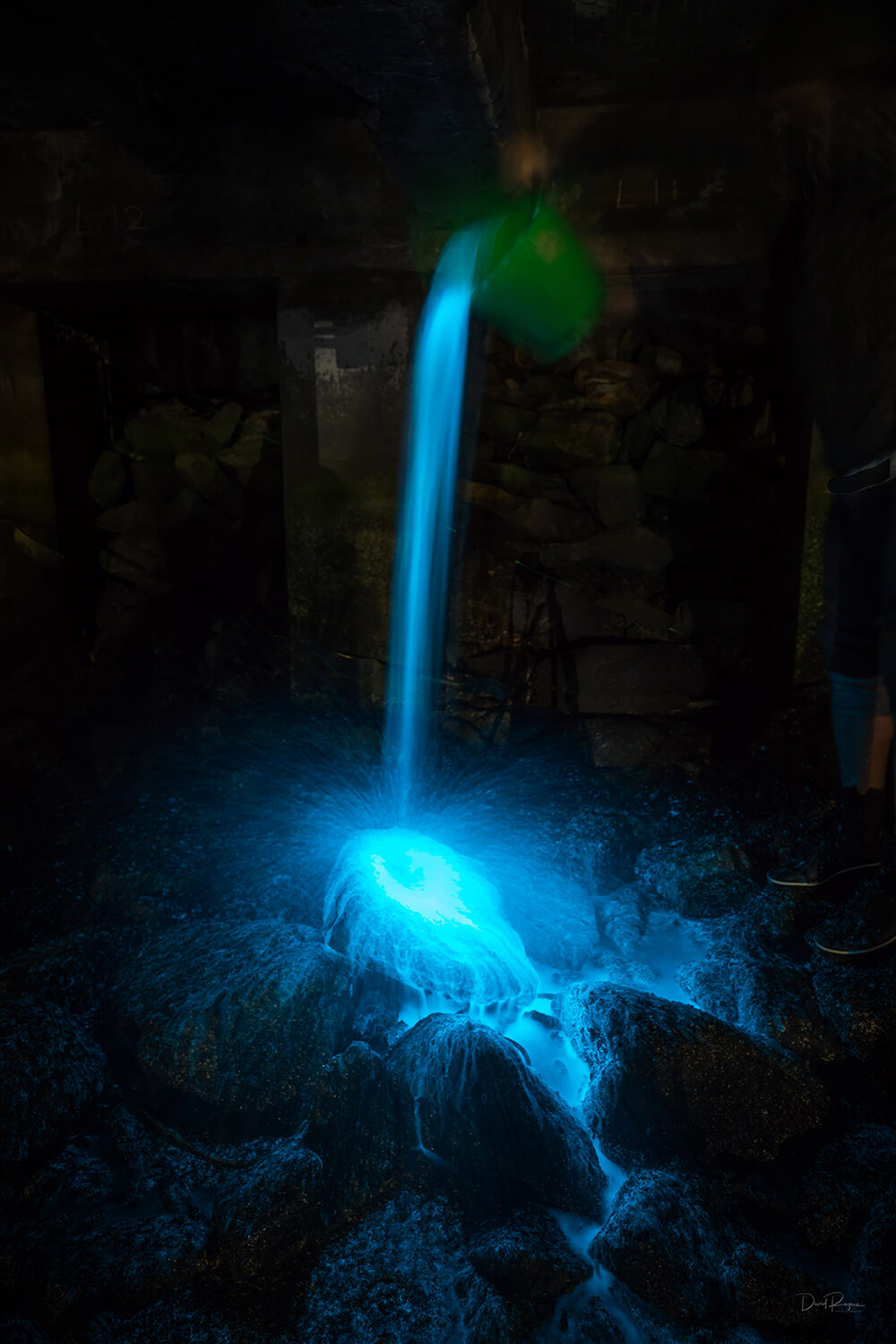 With a quick search over the ocean during the day, the algae bloom was easily spotted by its pinkish/red colour, hence the day time common name ‘Red Tide’. The algae floats on the ocean surface in a mass 'soupy-like' aggregation and are dispersed mostly by wind. It's easily blown onto shorelines and into estuaries and inlets where it becomes susceptible to tidal forces.

What Gear Did You Use?

I shot on a Canon EOS 6D Mark II with the EF 16-35mm f/4L IS USM and EF 70-300mm f/4L IS USM Lenses, and a tripod. I also used additional props such as a bucket, water, sand, sticks and feet. Shooting in dark and remote locations involves hiking and requires equipment which is compact and lightweight. You also need to activate the bioluminescent properties of the algae using ‘props’ like buckets of water, sand, sticks or human interaction which can all quickly become a messy scene. It's good to have equipment which is also durable and weatherproof. The 6D Mark II suits these needs perfectly. 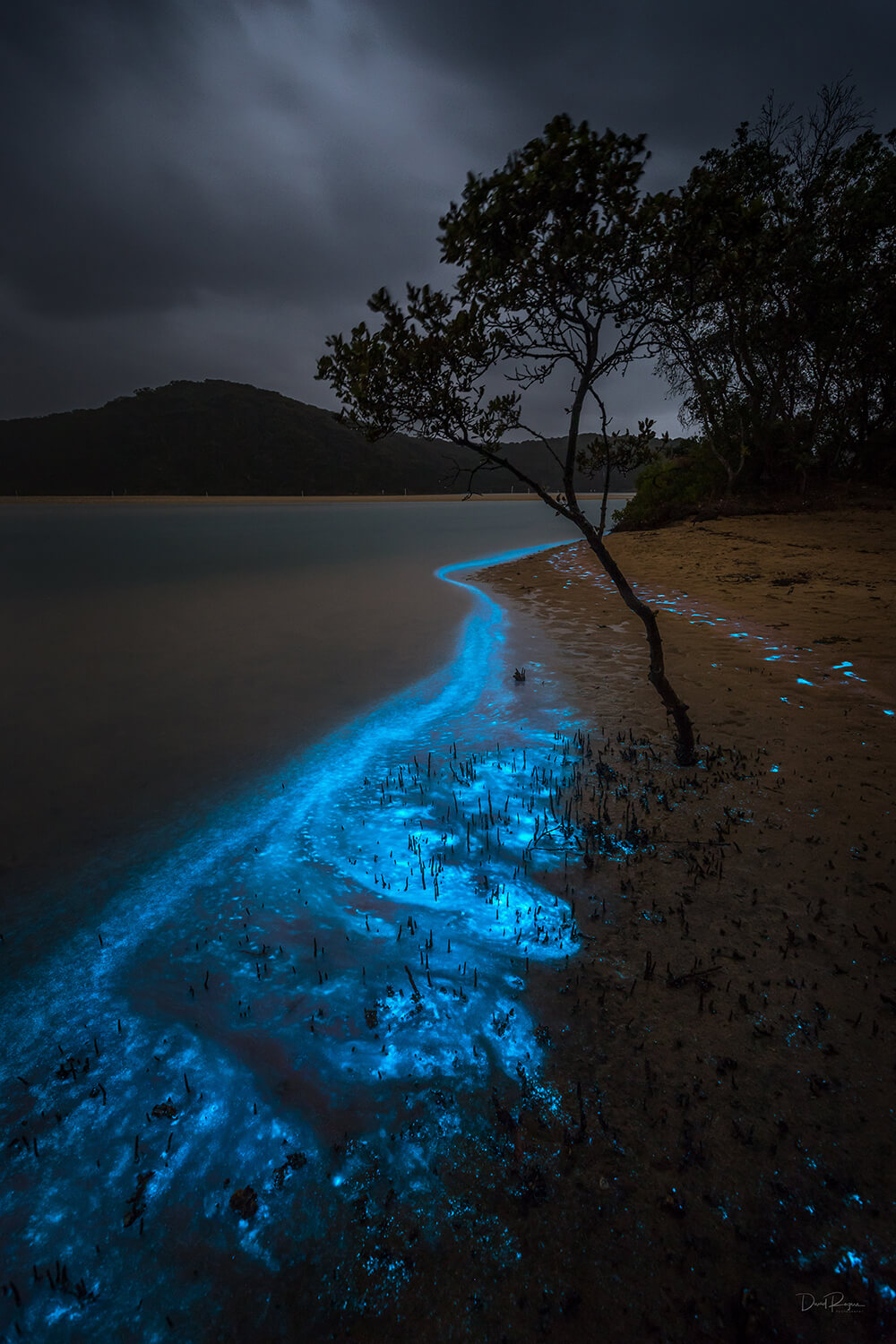 Generally, the same settings and techniques used for low light long exposure photography also apply when shooting bioluminescence. Open the aperture, use a higher ISO, and experiment with a different range of exposures depending on the location and desired effect. The following photos show two different setting techniques; 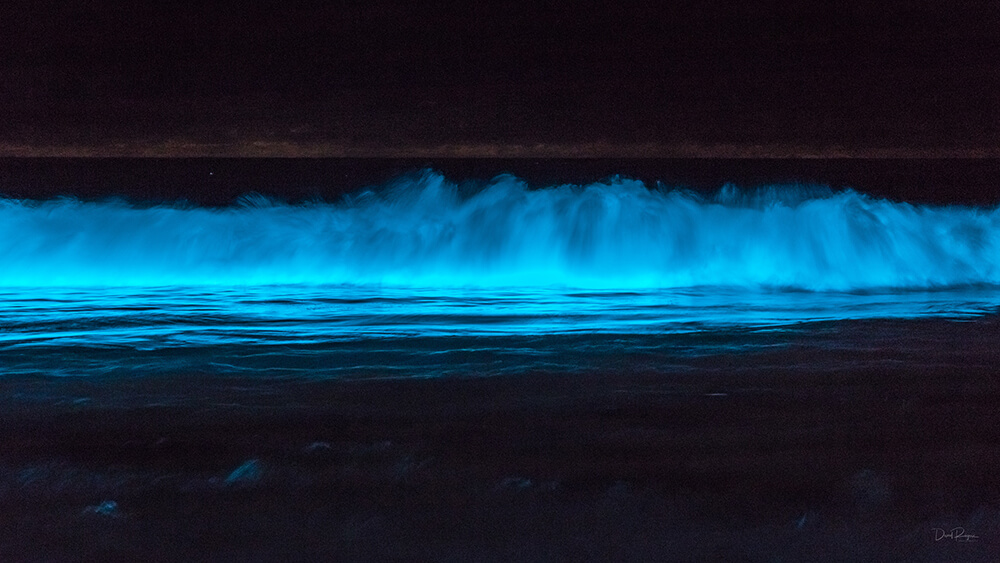 In this photo, I used a telephoto lens to capture the glowing bioluminescence in a distant moving wave. This required a relatively fast shutter speed in low light conditions. I shot the wave using a shutter speed of 0.3 seconds. This is generally the same speed I love to shoot all my water flow photos as it still captures the form of the wave but with a blurred sense of movement. To compensate for the faster shutter in low light I pushed the ISO up to 2000. 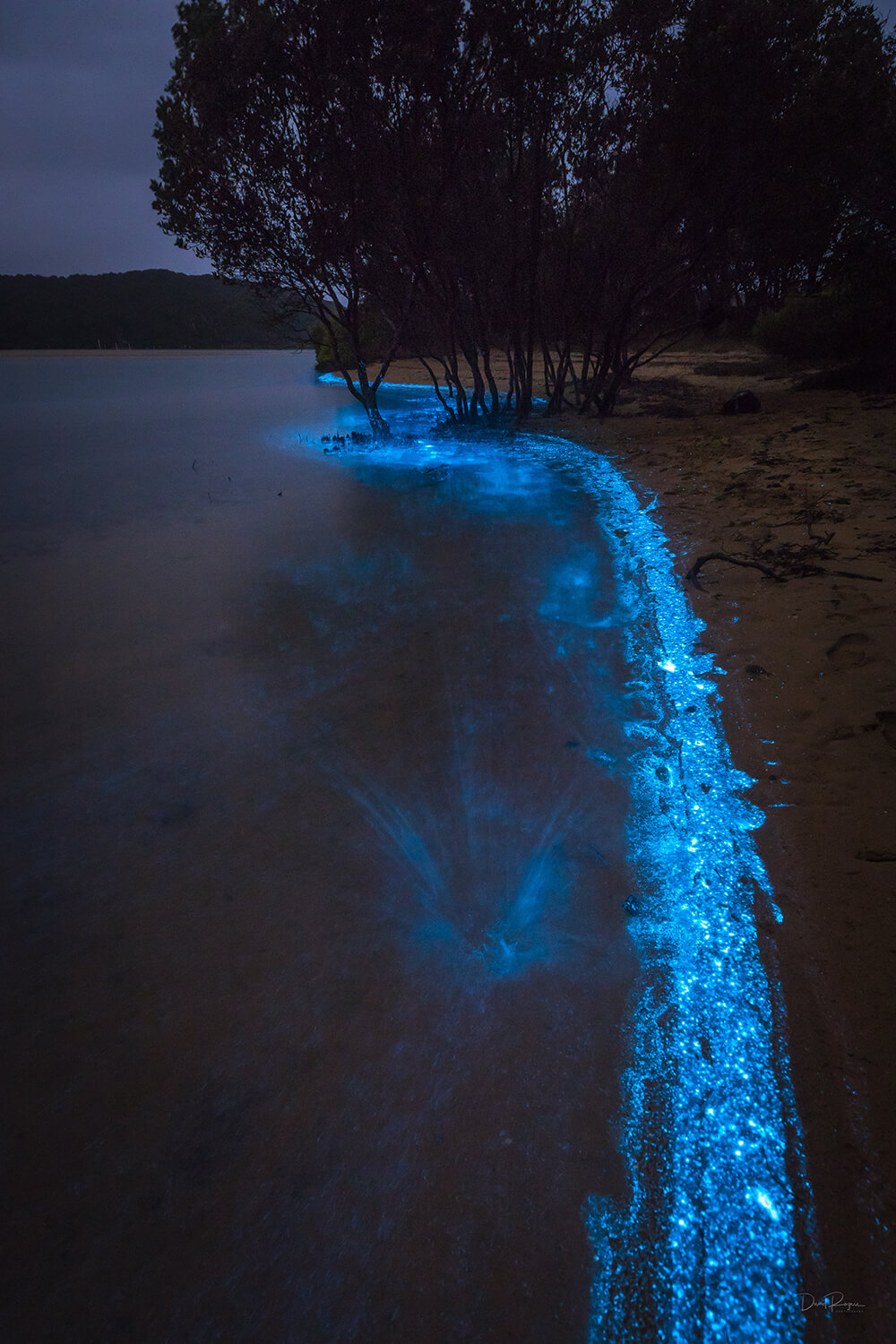 In the above photo, I used a wide angle lens to capture the bioluminescence in a landscape setting. As there was little movement within the scene I was able to expose for anywhere between 30-60 seconds. When you have a relatively still low light scene I always try to expose for a longer time rather than increase the ISO in order to get a cleaner image with less noise. I was fortunate to shoot this scene during the rain, where each raindrop activated the algaes' bioluminosity. It was the most beautiful moment watching the entire lagoon glow blue. I lowered the ISO to 800 and exposed for 60 seconds to maximise the low luminosity light capture.

Best Time of Day to Shoot

Get yourself ready at sunset to photograph the bioluminescence. As soon as the sun goes down the magic happens. For this reason, it is best to seek out the location of algae during the day, then wait around or return at sunset to begin shooting. Be prepared for a long night. The lifespan of the algae is relatively short leaving only a brief window to witness and photograph this rare event. So take as many shots as you can. My personal tip is stay focused but take time out to relax. You want to ensure you capture the perfect shot while at the same time enjoying the beauty of this natural spectacle, as you never know when you next will witness it. 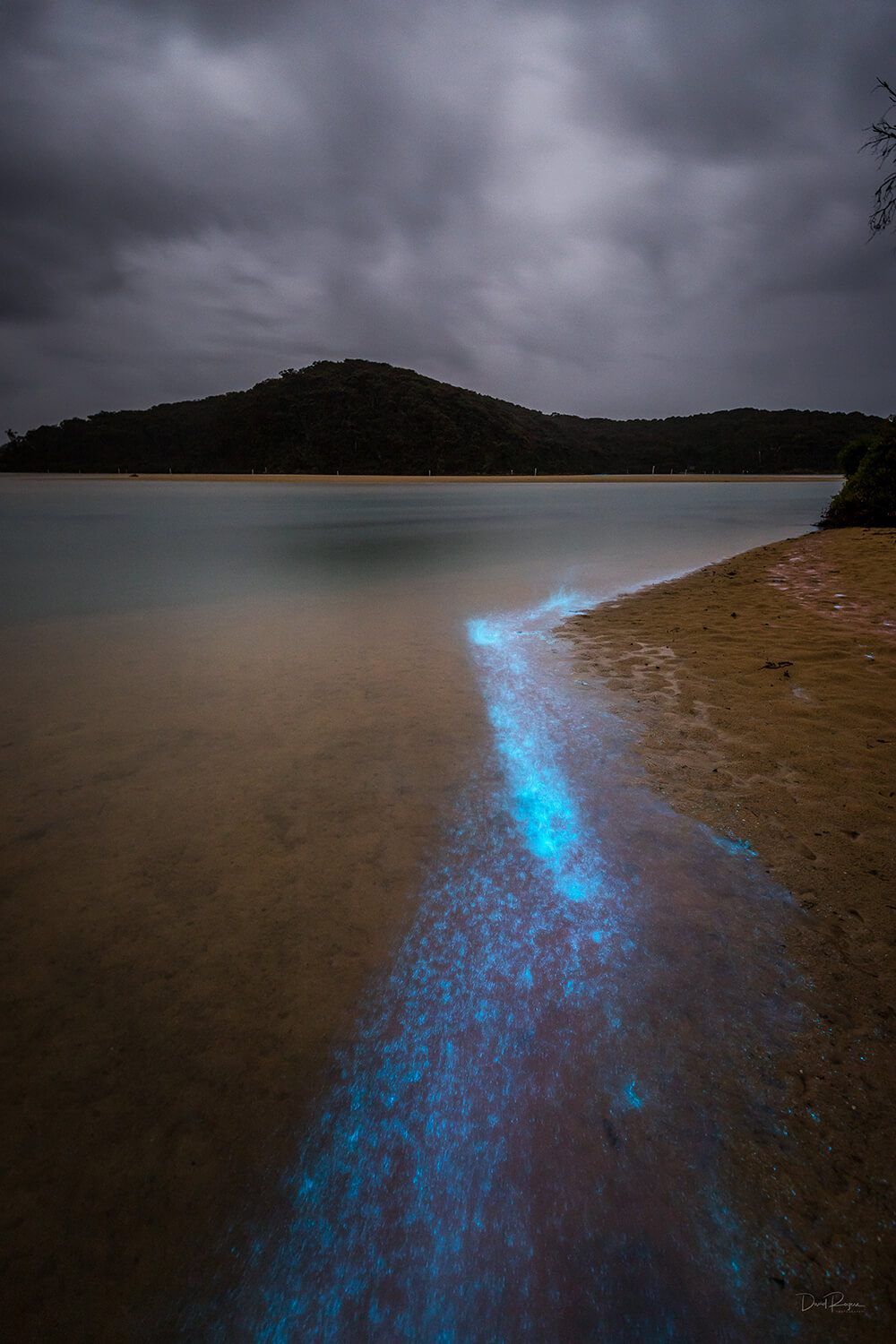 For more of David’s stunning work, check out his Instagram.