Japanese Craftsmanship & Innovation Collide in the making of EOS R

Canon has always put innovation and the best quality in the hands of photographers. EOS launched in 1987, “Fast - Comfortable – High image quality” has been the pre-requisite of all our products developed. They’re timeless traits which have driven the progress of the EOS system, and which continue to develop even now after more than 30 years.

But in the future, what’s deemed fast, comfortable and high quality will be different to each user. Image input systems need greater flexibility and potential that can meet the demand of each individual. Imaging has never been more inspired. We moved from film to digital, viewing behaviour went to display as well as print, and the sharing of images is largely how we communicate with each other.

With a sight to the future, Canon’s lead developers and designers in Japan were curious to develop a new system to rethink how imaging works. It’s no longer possible to look at imaging separately between lenses and devices. To unlock a new level of optical excellence, and expand the range of shooting even further, Canon created the EOS R System. 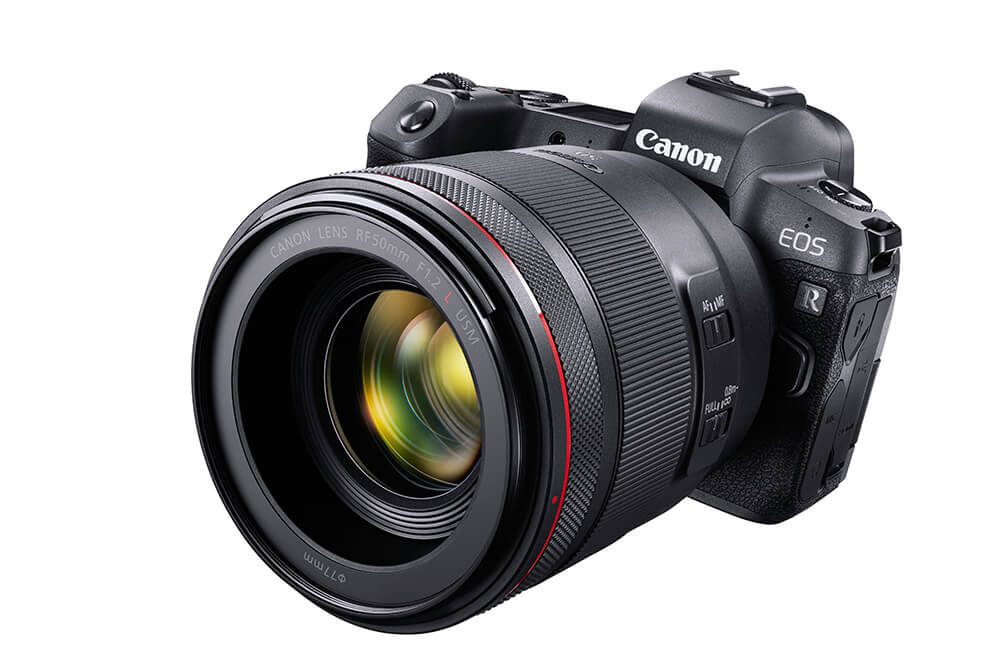 EOS R is a 35mm full-frame mirrorless camera. But the focus for Canon developers was not on mirrorless, rather an attempt to build a system driven by completely new lenses.

The technical and collective strength are the backbone of the RF lenses. It’s where you’ll find the developers’ passion to unlock the true meaning of the EOS R system. It was not simply about making a smaller camera.

“We began by reexamining the strengths of the EOS system,” says Manabu Kato, Image Communication Business Operations Senior General Manager. “The answer was the EF mount. Its true meaning lies in achieving an image input system with a new form, in which the camera and lens demonstrate high performance working together.”

"We did not want to create a small, lightweight camera. The ideal lens was what Canon has strived for." - Manabu Kato, Image Communication Business Operations Senior General Manager

"This new mount, and the 35mm full-frame mirrorless structure, were at the minimum distance to achieving our ideals."

The pursuit for the “ideal lens”, as it’s known at Canon, was underway and those who joined in the discussions were not only optical, mechanical, and electrical engineers, but people in charge of cinema cameras, surveillance cameras, and new projects under consideration.

A New Way to Communicate

The mount was the gateway to increasing the degree of freedom in optical design. Canon’s optical designers found the ideal results with a 54mm inner diameter mount. 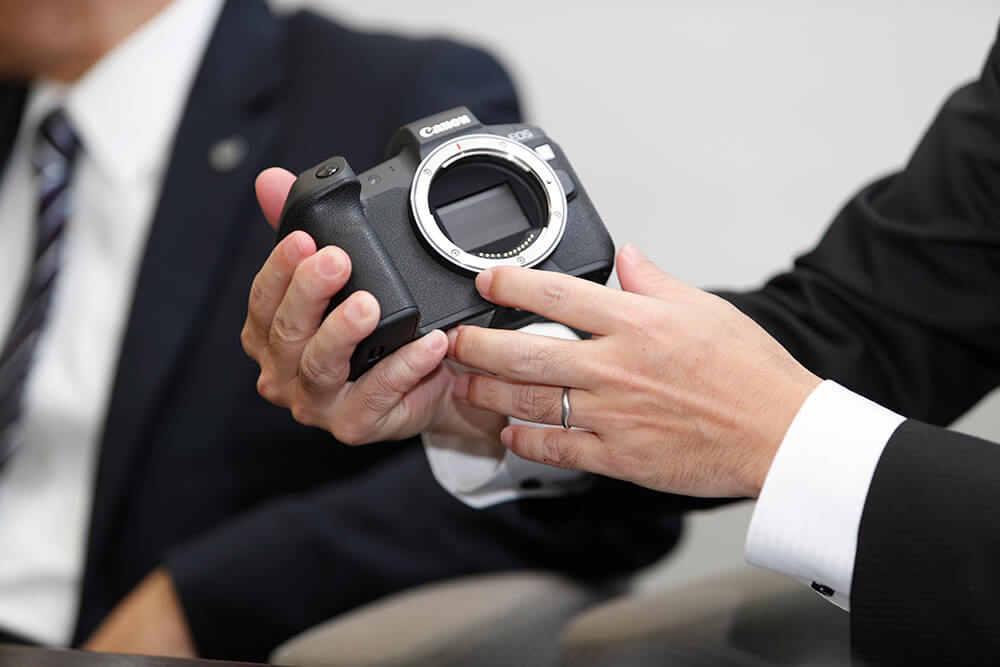 Symbolising this breakthrough is the RF28-70mm F2 L USM zoom lens with a maximum F2 constant aperture. A statement piece of technology, such specifications would have been too large for market as an EF mount.

The fact that this lens even has such specs as a handheld is a testament to the potential of the RF mount. Ease of handling and reliability are held with the upmost importance with all Canon products, and with that the flange back (distance from the mount surface to the focal plane’s surface) was the next challenge for the designers. By reducing this distance by approximately 50 per cent, designers were able to make the overall length shorter without impacting the rigidity. You’re left with a more compact and light-weight body that’s no less solid, and most importantly, still feels like a Canon. 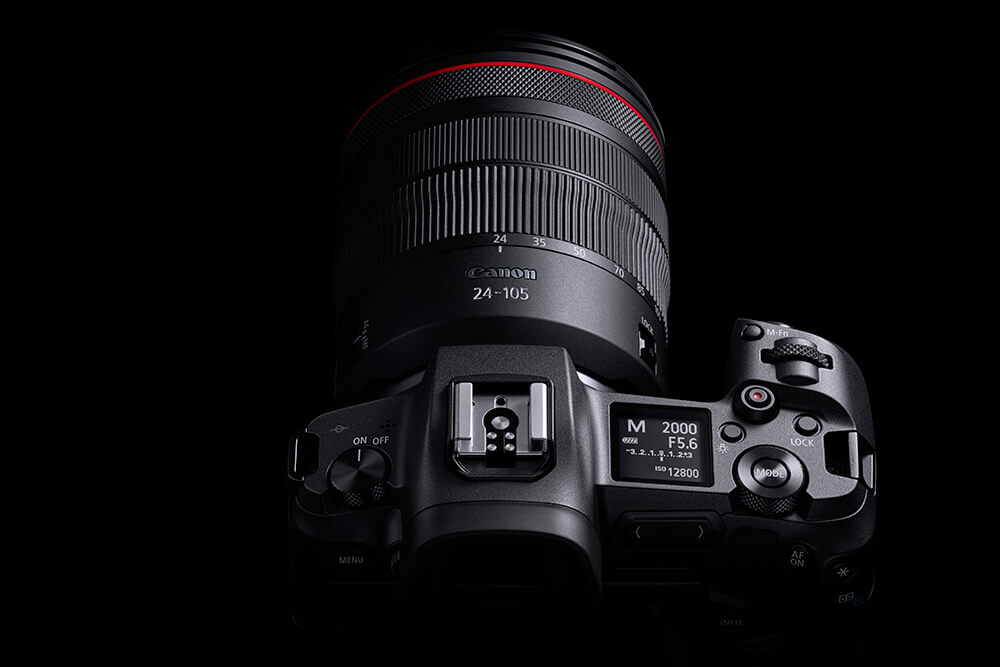 There is only a 1/2 stop difference F1.2 and F1.4, but the difficulty of optical and design is a whole other level. With a 50mm F1.2 lens for 35mm full-frame, it is extremely difficult to develop a lens that supports autofocus.

But developers felt they wanted to challenge the "limited area of lens development," to demonstrate the ability of the RF mount.

Canon’s answer is the RF50mm F1.2 L USM. The result is extremely sharp from the maximum aperture. The smoothness of the background blurring effect stands out even more. The first ones to see the preview shot results were the designers who are in charge of the camera's image processing. They also knew what F1.2 images taken with an EF lens looked like, and they said breathlessly, "We could not have imagined such image clarity and amazing background blurring," says Shigenobu Sugita, ICB Optical Products Development Center Manager.

The viewfinder was designed with an emphasis on visibility. Not getting caught in a specs battle with the competition, designers wanted to maintain clarity right to the periphery. A 0.5-type, high-resolution, highly responsive organic EL panel with approx. 3.69-million dots is used. 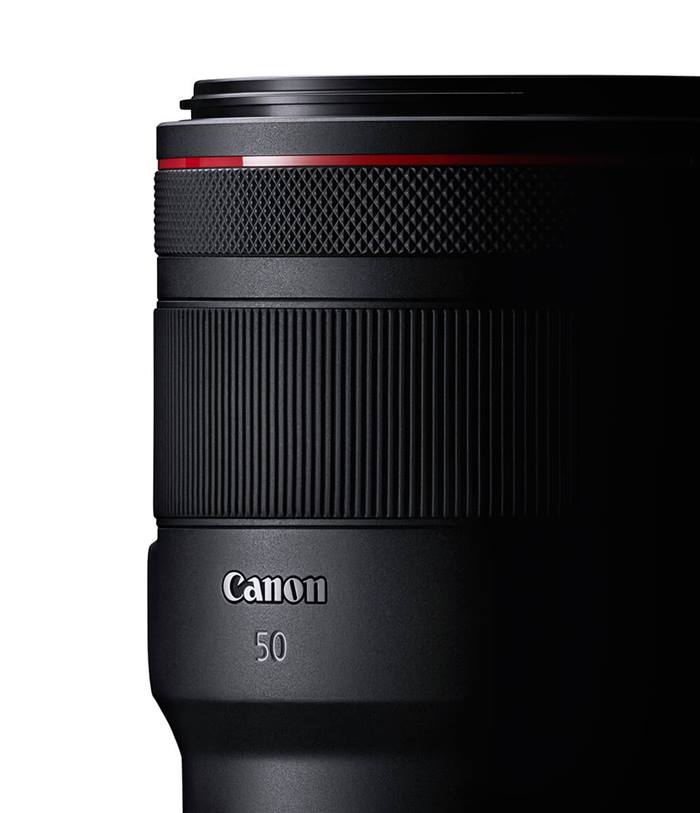 Achieving the images which users dream about and spend their days chasing, aiming for the highest image quality, has always been a proud stance for Canon. It doesn’t change with EOS-R. In fact, it’s improved.

In the past, lenses were able to retain basic optical data and communicate with the camera, but correction data, which required large capacity like Digital Lens Optimizer, was left to RAW processing software and cameras. This is why data was downloaded every time a new lens was released. With EOS-R, designers were able to retain this in the lens.

"RF lenses are high resolution and high contrast. But on top of that, Digital Lens Optimizer can be used as one of the tools for maximizing the image quality. The starting line of image quality design itself can be set higher than that of existing EOS cameras,” says Sugimori.

A new circuit capable of high-speed data transfer was designed for hardware communication to control the autofocus, aperture and image stabilization with higher precision. With that shift comes the ability for more detailed optical correction. The number of contacts within the mount has grown from eight to 12. 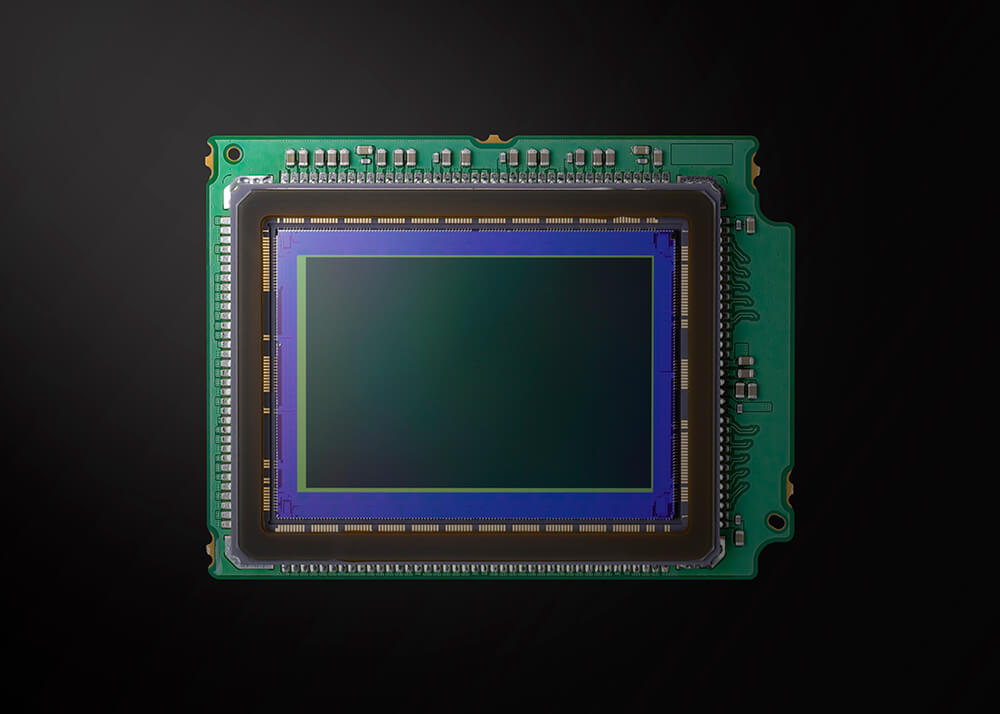 "Thirty years ago, engineers invented EOS communication system. There is no surprise in their foresight. With the EOS R system as well, I wanted to build such a system that would satisfy engineers 30 years from now." - Yoichi Sato, ICB Products Development Centre Senior Project Manager.

The EOS system has always enabled lenses and cameras to actively communicate. EOS-R makes that communication more exciting, the possibilities of expression and ease of use have reached a new frontier. One inspired feature of the new RF lenses is the control ring, a new means of communication between lens and camera which can be customised to the needs of the photographer.

At the dawn of digital cameras in 1999, Canon first came up with the idea of the CMOS sensor configuration and began research. But there was a technical barrier in achieving both imaging and phase-difference AF on one pixel and it was forced to abandon the idea of realising it in consumer products. By 2010, it’d become a reality and a Canon elite team was assigned the task of making this innovative technology a mainstream feature of camera systems. It lead to the launch of the EOS 70D with Duel Pixel CMOS AF and marked a milestone of Canon’s pioneering spirit.

With the EOS-R system, designers were challenged to find a new level of sophistication.

"Dual Pixel CMOS AF technology is the crystallization of creativity of the designers of CMOS sensors, lenses and imaging processors. If even one of them was missing, it would not have been achieved. It is because the AF technology is unique to Canon, and we design and produce it by ourselves.” - Koichi Fukuda, ICB R&D Center 1 Manager

It’s lead to Canon’s Dual Pixel CMOS Auto Focus (AF) being supercharged with the new DIGIC 8 imaging processor. With the conventional EOS system, autofocus and lens control sometimes had to go through distributed processing by dedicated microcomputers. Now, we can deliver AF in 0.05 sec - the world’s fastest in a full frame camera. It includes an astounding 5655 available AF point positions, increased frame coverage area of 100% vertical and 88% horizontal, eye detection AF, the ability to focus in the dark down to EV -6, and intuitive control via touch and drag AF. 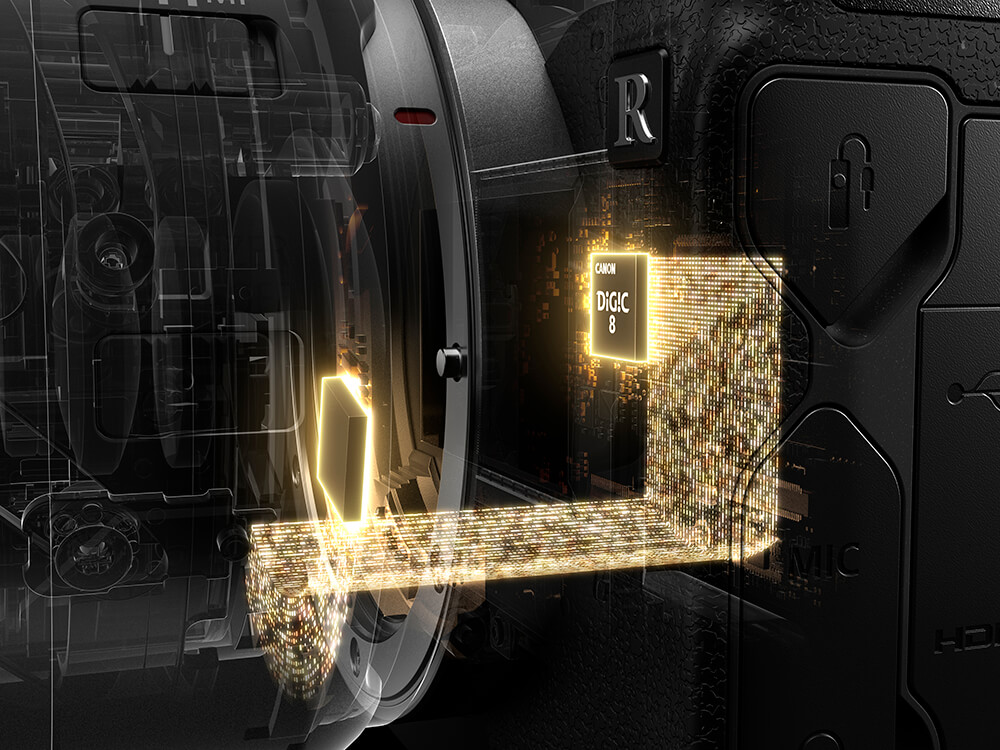 "With Canon's proprietary Dual Pixel CMOS AF, all are imaging pixels and are phase difference AF pixels at the same time,” continues Fukuda. “It is the ultimate aspect of focal plane phase-difference detection AF, and enables high-speed, high-precision phase-difference detection AF even under severe optical conditions that were impossible up to now. Its potential backed up by theory makes the EOS R system decisively different from other mirrorless cameras."

Dual Pixel CMOS AF is the joined forces of elite amongst Canon’s engineers, and if it were not for their efforts, it would not have supported the RF lenses that makes use of the large diameter mount and short back focus to the full potential. Expect a new level of speed and precision of the camera, achieved by data transfer 40-times the maximum of the EOS 5D Mark IV. It’s not just the RF lenses which benefit from a DIGIC 8 image processor. With a mounted adaptor, more than 90 EF lenses within the Canon range able to utilize advanced AF function.

“Development of the imaging processor takes a long period of time. It is a hardware process that would not have been achieved if we had not planned and worked for many years,” says Mineo Uchida, ICB R&D Center 3 Manager. “Scenes that can be autofocused are far more extensive than with the EOS system up until now.”

Shooting images and motion requires different specifications from lenses. For example, slight fluctuations in brightness due to the aperture drive normally isn’t an issue with still images, but can be very noticeable with vision.

By controlling the aperture diameter with high resolution, compatibility with motion has been greatly improved over the EF lens L series.

"With the EF lenses, which was developed for still images, there were limitations in movie performance by the communication system,” says Masanori Ishikawa, ICB Optical Products Development Center General Manager. “The EOS R system will maximize the merits of the components, and higher precision exposure and stable images will be obtained in movies. Envisioning a wider range of expression than the EOS system. This is why a new system was needed.”

Operation of the aperture by the control ring is controlled from the camera side utilizing the new mount communication system. Meanwhile, control of the END accompanying zooming is performed by the lens alone, achieving linear and smooth aperture control.

As a result, RF lenses can suppress changes in the amount of light even with a slow zoom in and zoom out typical of video, and can record natural images. This type of movie handling capabilities cannot be described on spec sheets. Movie shooting with an SLR camera is now much closer to perfection with this system. 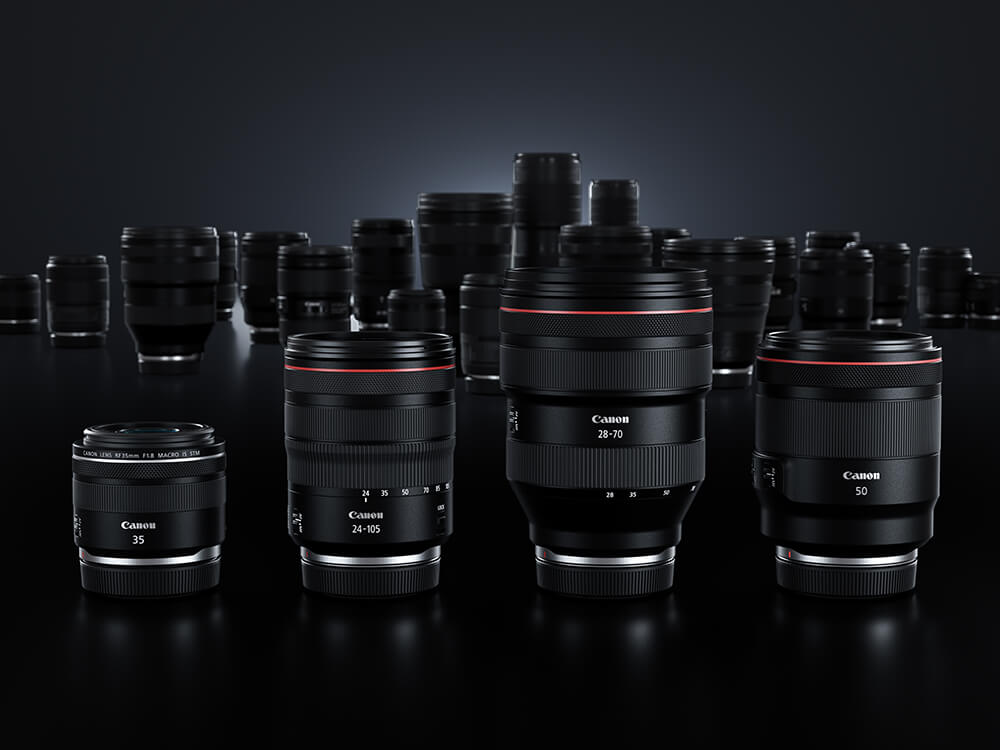 For every moment of thought, every hour of development, it was never just about making a new camera for these designers. It was never about keeping up, or fitting into a category. It was always about enabling the best imaging for the world, and with it, allowing Canon users to find a new level of expression.

That simple motivation through years of development, had unlocked new technologies, advanced functionality and performance. It forced designers to approach things differently, to re-think what was possible, without ever jeopardizing that Canon feel.

In the ultimate show of respect to their predecessors who launched EOS over 30 years ago, the dedication of an elite group of passionate designers have ensured that “fast, comfortable, high-image quality” remain the pillars of Canon products now, and in the future.

Photographers and filmmakers, EOS R is now in your hands. What story will you tell first?