Attila Csaszar: From Budapest to a Vegemite Spread

The latest Vegemite ad is filled with Australian icons.

Attila Csaszar’s evocative photos of a Muslim surfer caught the eye of ‘Thinkerbell’, Vegemite’s new advertising agency when they searched Getty Images for ‘Tastes like Australia’.

For full-time freelance photographer Attila it’s been an incredible journey – as a 2003 graduate in Budapest to Canon workshops in Brisbane to participating in the ‘This is Australia’ program by Canon and Getty Images.

We caught up with Attila as he rides a new wave of success.

Your background in Australia is in editorial photography?

I started in Perth and became a staff photographer with Business News WA shooting powerful business people and politicians like Malcolm Turnbull and Julie Bishop.

You have to think on your feet to get the shot, and often frame the image so there’s room for editorial around it.

You learn pretty quickly that these guys don’t pause in their tracks – and if they do, it’s only for the briefest time. The quick shot not only gets the page, if you have an eye for seeing a situation as it develops, you can also catch the personality before they have time to put on their ‘game face’.

With business people, in a longer profile piece, I always study the business and the person before the shoot. It gives me a better understanding of them and provides some topics as ice-breakers. Many feel nervous when photographed and it can be a long session. If I can connect with them they feel appreciated and we end up having a good chat. They’re more relaxed and their personality is reflected in the photograph.

So, tell us about your photography journey

I trained, like many of us did, on film. Budapest was a paradise for shooting architecture and street scenes. I moved to Perth in 2012 and I guess found beauty in the Art Deco buildings that many may have taken for granted or missed. Eventually my family and I moved to Brisbane.

We always imagined our life in Italy or the South of France, but it didn’t take long to figure out we wanted to live here and after a very long and difficult visa process we finally made it. We were just under 35 with a new-born and wanted to challenge ourselves.

Mark Twain wrote: “Twenty years from now you will be more disappointed by the things you didn’t do than the ones you did do. So throw off the bowlines. Sail away from the safe harbour… Explore. Dream. Discover.”

And led to Vegemite

I saw Getty Images was looking for surfers, especially female. As the brief was ‘Multicultural Australia, I thought it would be fantastic to find a female Muslim surfer. The rest, as they say, is history!

I’ve had many compliments about the series and its inclusion in the Vegemite commercial, so I hope the whole collection will have an impact on perceptions of multi-culture. 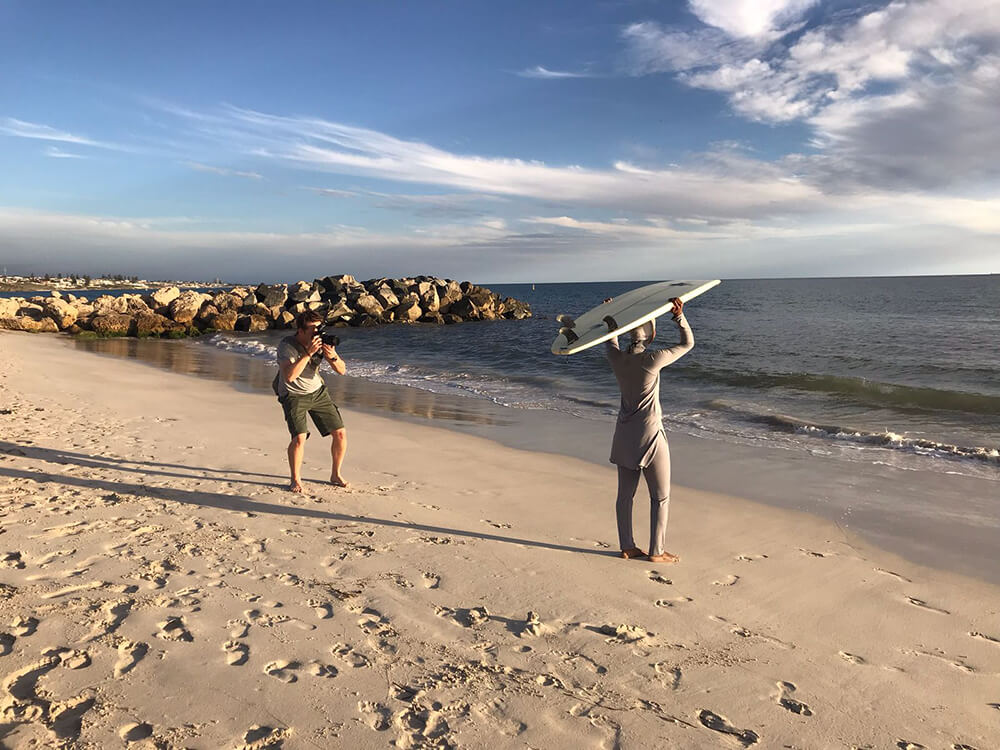 'Tastes like Australia' campaign by Vegemite and Thinkerbell featuring photograph for ‘This is Australia’ by Attila Csaszar, Getty Images contributor

How important is diverse imagery in advertising to you?

Very! Diversity is great in any form of life and with clever advertising it might help to change perception. I think Canon and Getty Images have a great audience to generate discussion.

Any projects in the pipeline?

A couple. I’ve got some multicultural contacts in Perth and I’m interested in capturing their everyday Australian lives. Going shopping, at the beach, parties – whatever they do differently, or the same. I’d also like to do the Great Barrier Reef. Not too much reef, but the locals, tourism, and even scientists in their natural environment.

Finally, what’s in the camera kit?

Currently a Canon EOS 5D Mark III with a 5D Mark II for backup. I switched to Canon in 2011 and I’ve never looked back. Everything just meshed perfectly; the feel when you grip the camera, the placing of control buttons and the colour is so much softer and nicer. My favourite lenses are the EF 24-70mm and EF 70-200mm because they’re both excellent in any zoom position. The EF 24-70mm gives a great wide angle and close-up. I often use two cameras and both lenses at the same time. It’s just awesome and I must admit has saved my life more than once shooting at a press conference.

The lighting isn’t always the best there, or the subject is behind a lectern, and I find I get a softer blur, brilliant in any environment. This sounds crazy but the sound of the Canon is softer too. Some cameras sound like an AK-47 going off in your ear!

Back to Stories
Thanks for subscribing. Please check your inbox and confirm your subscription.
Don't miss these inspiring stories and tips
SHARE THIS PAGE