Behind the Image: Rubbing Shoulders with a Warlord

Acclaimed conflict photographer, Stephen Dupont, shares the story behind one of his prized wartime images. The shot of Ahmed Shah Massoud—leader of the Afghani Northern Alliance—was captured in 1998.

Along with my writer friend Jean-Marie Montali we flew from Dushanbe, the capital of Tajikistan, to a Yangi Qala, a northern stronghold of Massoud. We travelled in Massoud’s personal helicopter, a Russian Hind decked out with red carpet and plastic flowers. Besides Jean-Marie and myself there was one dead general in a wooden crate in the back of the chopper. He must have been an important soldier to be gifted the VIP service directly to his family's village. Following this stop over we soon landed at our final destination to meet up with Massoud himself.

It is 1998 and the height of the war between the Taliban and Ahmed Shah Massoud’s Northern Alliance. I had been going to Afghanistan now for five years regularly covering the ongoing civil war, and this would be my third assignment covering a story about Massoud for the French weekly magazine Le Figaro.

Before leaving Paris we asked him if we could bring him anything? Maybe clothes? He was a pretty stylishly dressed warlord. Medicine? No, he asked us to bring him a DVD of the world cup final soccer match between France and Italy; his satellite dish was out of order. We also brought him a copy of the last published story we had made of him, when he was based in Kabul as Minister of Defense under President Rabbani.

Afghanistan is a strictly Muslim country where some foods are seriously forbidden. Jean-Marie brought with him some French delicacies, the camembert was alive and I swear it moved when Jean-Marie opened the pack. But it wasn’t the cheese that was a problem, it was the salamis. Being caught eating pork could mean immediate death. We nervously and discreetly devoured the salamis, thus getting rid of the evidence.

This trip with Massoud would be the most memorable of all. I spent weeks with him, watching and photographing his every move, flying to remote villages and over some of the most dramatic and beautiful landscapes Afghanistan has to offer. One time Massoud even took the flight controls to land us in a soccer field in the town of Taloqan, his closest body guards in the back quietly praying under their breath as he ducked, dropped and swerved, eventually hitting the ground with a firm thud. We made it in one piece and the usual crowd of supporters was there to greet their war hero, their future leader. Elders shook hands with him and children stared in awe. 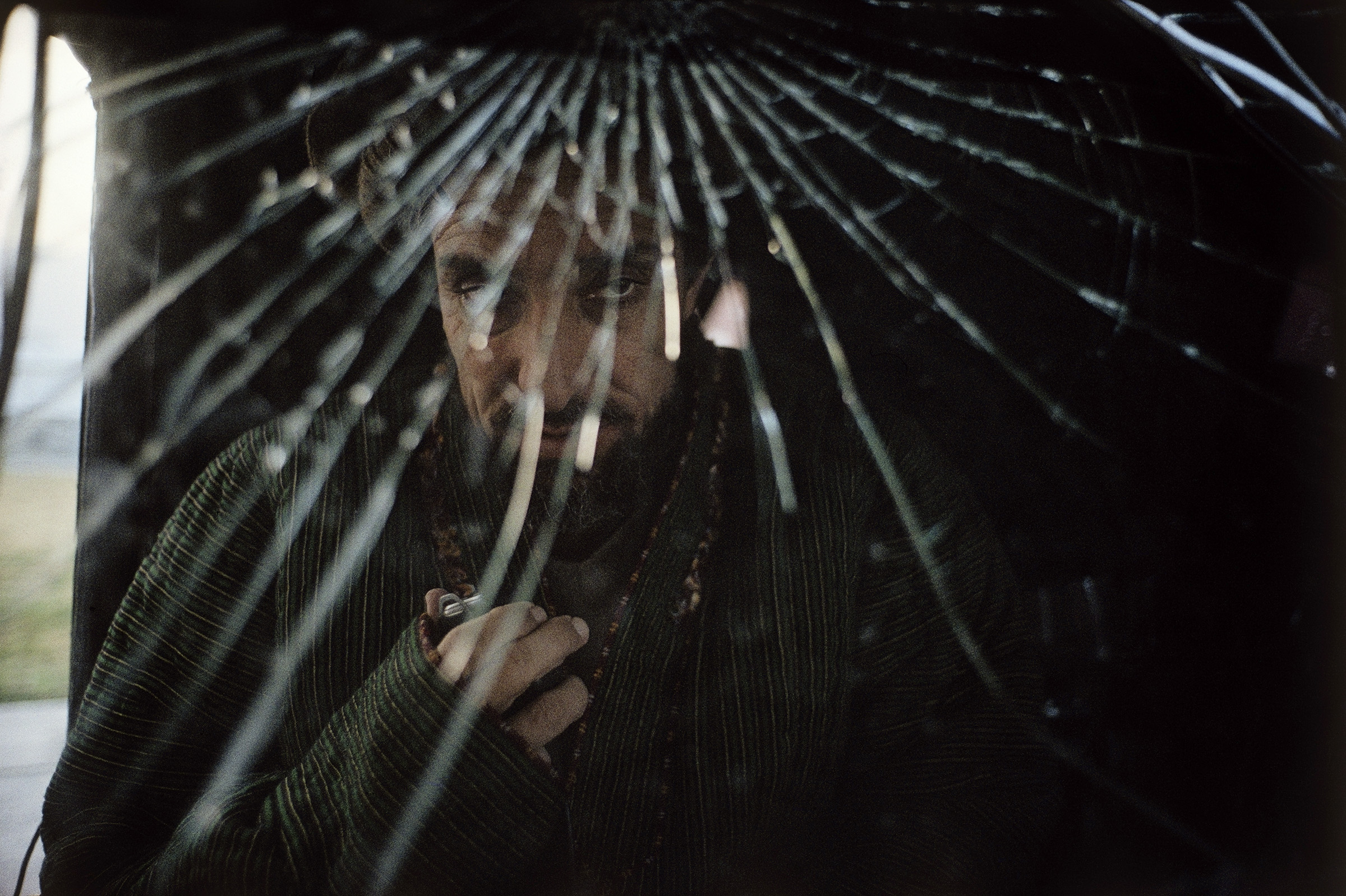 This photograph I took of Massoud is one of my favourites. He's inside a jeep talking on a two-way radio, possibly to his troops on the frontline. I saw intensity in his eyes that I hadn’t seen before and I wanted to capture this gaze. With the cracked windscreen the photograph just came together beautifully.

We travelled all through the Panshir Valley with him, stayed at his home village and personal guesthouse, got an intimate portrait inside his life that very few photographers get. On our last day Massoud took us to a hill overlooking his home village where he said he was going to build his new family mansion and also a guesthouse that we would be welcome back to. I had Jean-Marie take a photograph of Massoud and I on that hill. Sadly I would not return to see his dream lodgings, but instead to view his grave.

Al Qaeda Iranian terrorists disguised as a film crew assassinated Massoud on September 9, 2001. During an interview they blew him and themselves up. The bomb was hidden in the video camera. When I arrived in October his grave was still a fresh mound of dirt with flowers. His body was buried close to the exact spot where the photo of him and I was taken. 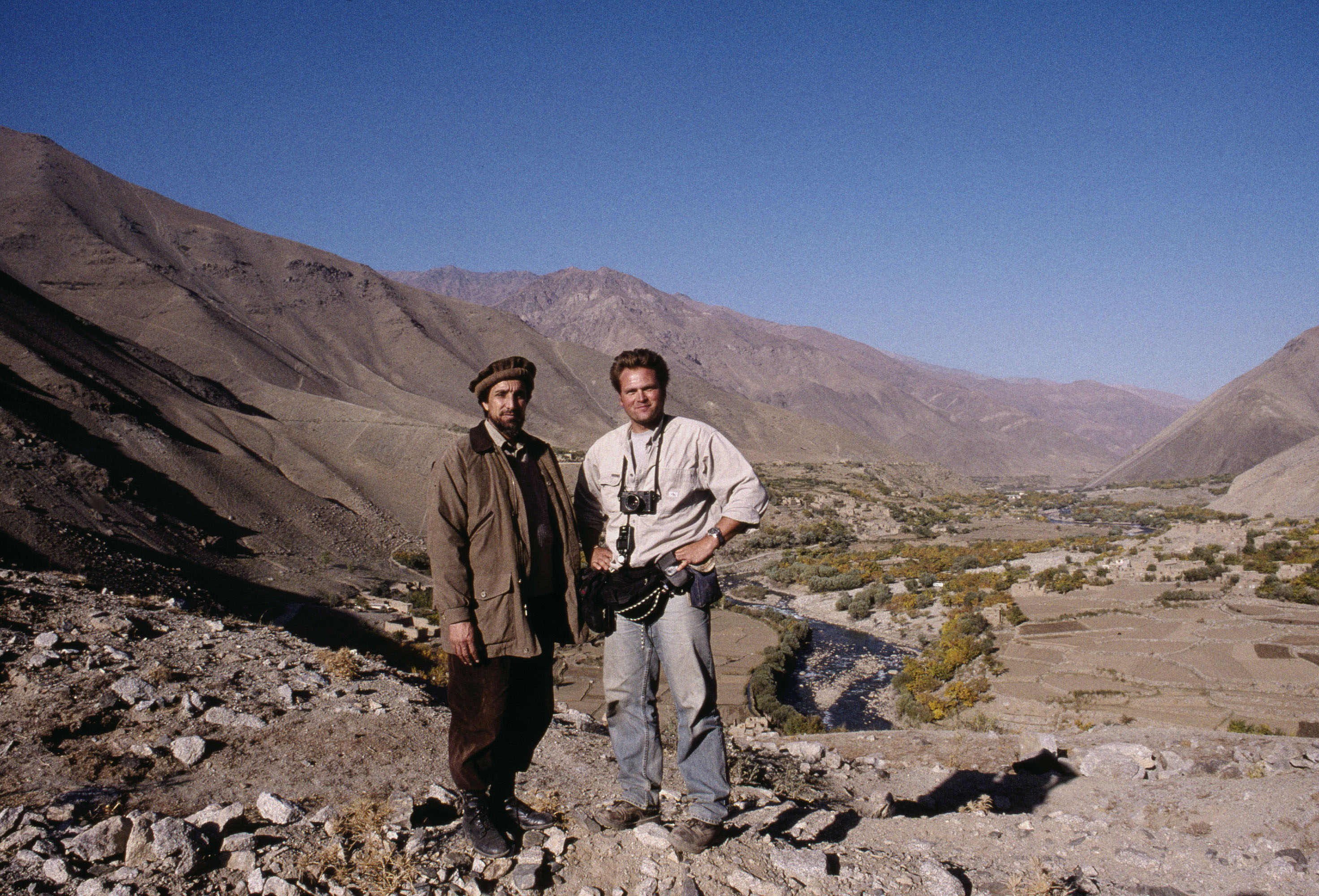 
Written by Stephen Dupont.
Back to Stories
Don't miss these inspiring stories and tips
SHARE THIS PAGE