I’ve set myself a near impossible task. Attempt to photograph one of the shiest, most mysterious creatures on their terms and in their home environment of the ocean.

This group of islands have to be one of the most unique and isolated locations in the world. The Azores is essentially a volcanic time capsule that’s floated to the surface in the middle of the Atlantic Ocean.

And its secrets are only just being discovered. A walk along the volcanic coastline reminds you of just how much ocean surrounds you. It’s a quirky place full of quirky encounters of the human and animal kind (I talk about more of these encounters from our Azores expedition here). That vast Atlantic ocean has provided a barrier to the culture and the environment changing but the deep, impossibly clear waters have also provided transport to allow some very special creatures to pay the islands a visit.

You realise very quickly in the Azores that as humans, we literally skim the surface when it comes to our interactions with the natural world.

If it wasn’t already a challenge, if Sperm Whales don’t like you, they disappear. And seriously disappear. Almost 2500m down into the deep blue water. There’s not even any light past 900m so when they want to avoid the spotlight they can really do it. Adding to the complications are the fact that I’m in the water without scuba gear.

The challenge of photographing anything large like a whale is giving a sense of scale. But Krystle won’t be in the frame to simply demonstrate their size. Her presence will give me so much more. I want to capture the moment that an adventurer like Krystle encounters this so-called beast. History is littered with stories depicting sperm whales as killers capable of ramming ships to sink them.

Technically however, I had to be careful. We were shooting this image of a diving, fast moving whale in deep water that sucks the life out of your lungs and the light out of your frame.

I was shooting everything on one crazy breath of air and having to make multiple adjustments for focus and light changes.

But first we had to find them.

Wildlife have a way of looking at your plans and laughing at them. You can get frustrated but in a way they’re simply finessing your trip to ensure you truly treasure the encounter that you are finally gifted.

After consistent whale sightings for weeks, we hit the water and didn’t see a single whale for five days.

It was hurting us to know such incredible encounters were going to waste but those quiet days on the ocean actually left me even more intrigued by the social structure of these whales. What event had caused every single sperm whale to disappear from our island and congregate elsewhere? A feeding frenzy? A birth? Or perhaps a death in the family? Whatever it was, the first sighting of the whales after this event saw the most peculiar bonding moments that many locals had never witnessed. Up to 10 sperm whales were swimming in formation and then spending long periods of time gently caressing each other.

It really was a moment where you begin to wonder whether their concept of family is even stronger than ours.

It’s always hard to compare anything to your first sperm whale encounter. After five days of nothing, we had received word that a ‘blow’ had been seen. These blasts of air from the blowhole are often the only indication you get. So naturally we were desperate to get in the water. But these whales were incredibly shy and diving at the first sign of a boat.

You have to remember that some of these whales are old enough to remember hunting so it’s probably not a surprise.

Anyway, I’d been dropped into the water to swim to where we thought a blow had come from. But there was nothing. Suddenly, with me still in the water, the team saw another blow 200m away so they sped off in that direction leaving me behind. But then, the eeriest thing happened. I began to feel the communication ‘clicks’ of a whale. Thinking I was imagining it, I stuck my head under and they were certainly coming in fast and loud. A few seconds later, through the blue, I saw the most remarkable sight. A 25 metre long sperm whale sped through the water like a submarine, arcing and fixing that big eye on me as he passed.

He was clearly as surprised as I was but I managed to capture the moment with an image I’m incredibly proud of. This will stay with me for a lifetime.

I love the way this film captures the quirky nature of these islands. The film becomes a digital message in a bottle from this far away place that really demonstrates the beauty of the Azores along with the challenges you face filming in a place that time has forgotten. 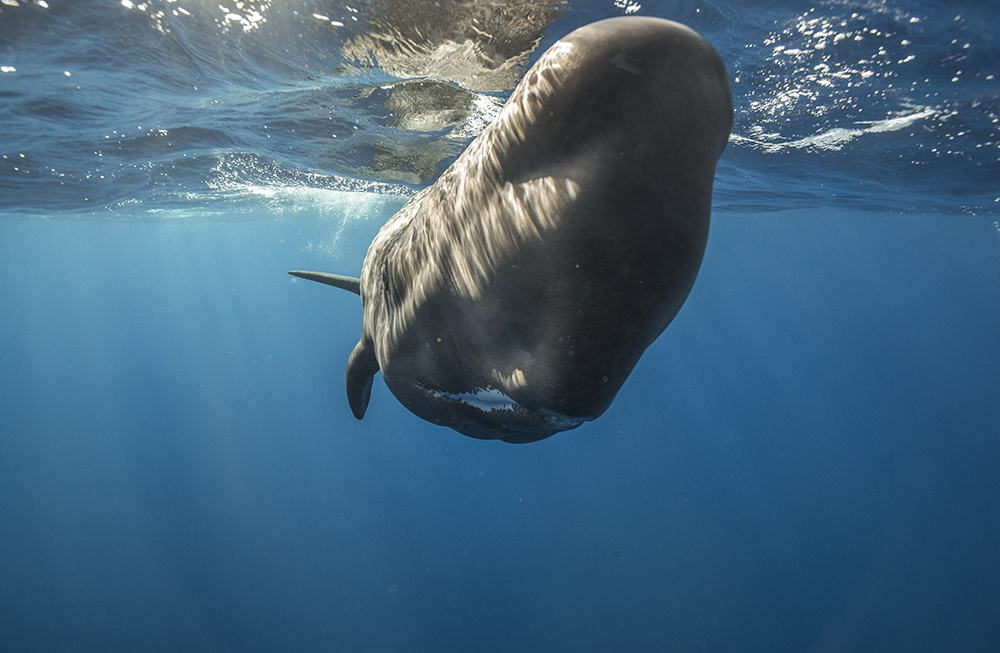 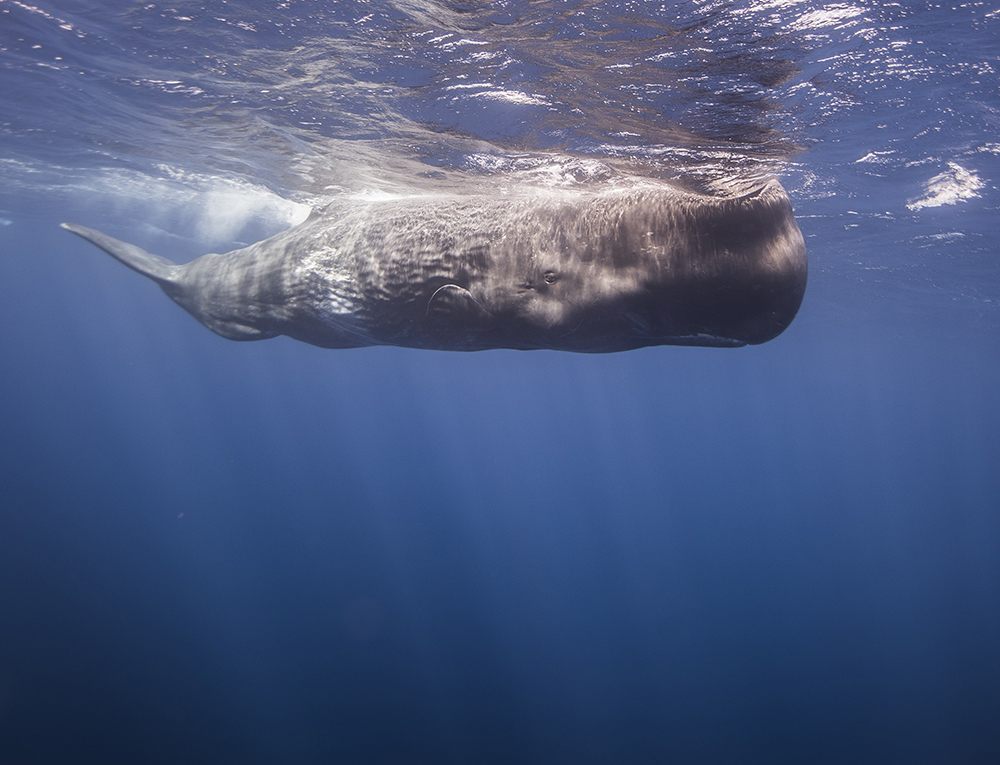 First contact. This is the moment I refer to above. This is shot off a 14mm lens meaning he’s far closer than he seems. The clicks he was directing towards me (their form of sonar) were telling him exactly who or what I was. I often look into that eye and wonder who was more surprised… 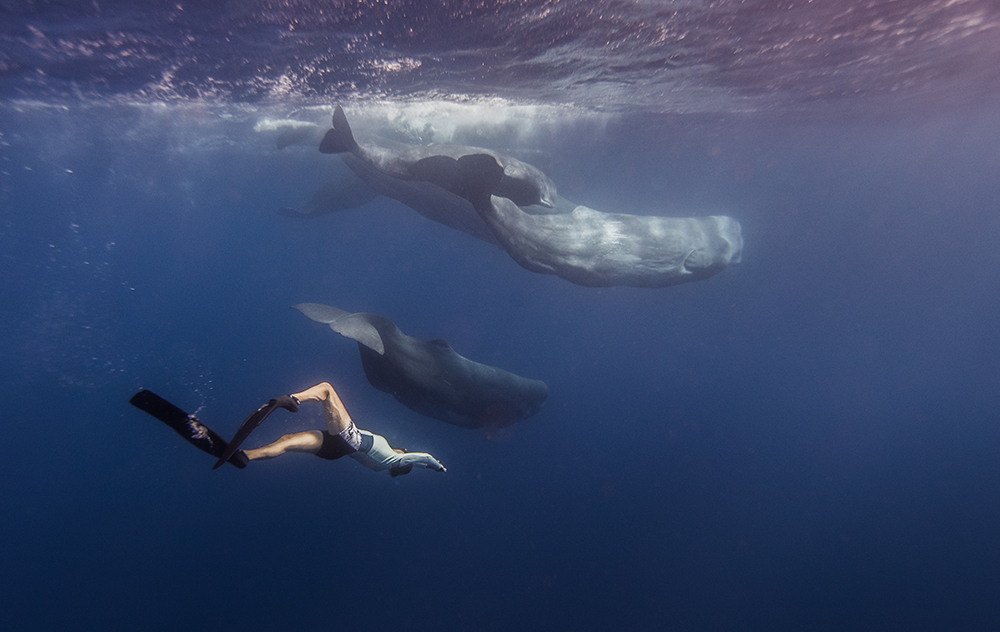 The final image. Incredibly, this was taken on the last morning. After 11 days in the Azores, it took the last few hours to nail the image I’d been dreaming of all along. In spite of whale shyness, family business and underwater housing issues, we finally had the image we wanted. The moment where the misunderstood giants of the deep met with Krystle in neutral territory. 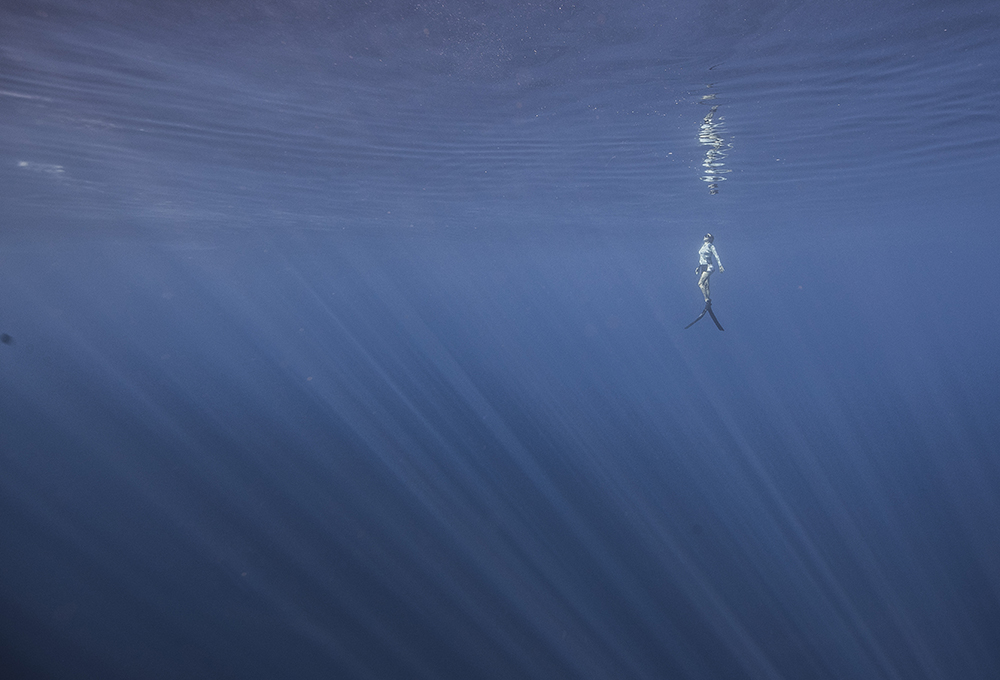 It’s a scary thought that there are over 2000m of ocean beneath you. Here, Krystle Wright explores the depths of the Atlantic and is made to feel very small. 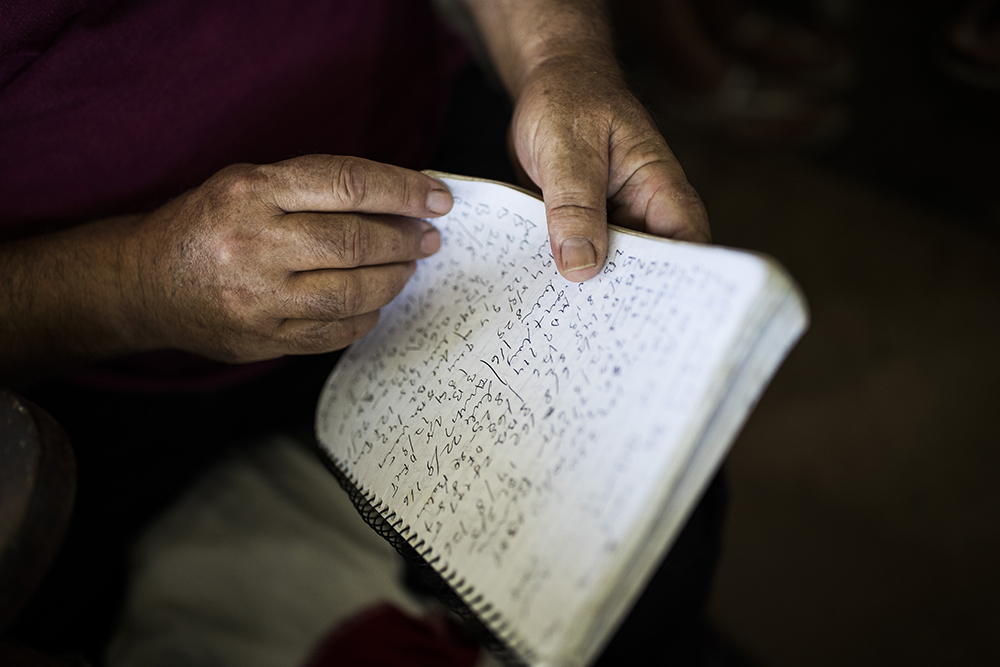 The “Vigia” (whale spotters) are revered characters on the island. They were the eyes of the whale hunting industry, but today still work by spotting whales often up to 20km off the coast, but for a more peaceful purpose. Tourism. They’re also methodical record keepers and have details of every whale that has swum past Pico island (and blasted air out of it’s blow hole) for the last 30 years. There’s some history in those hands… 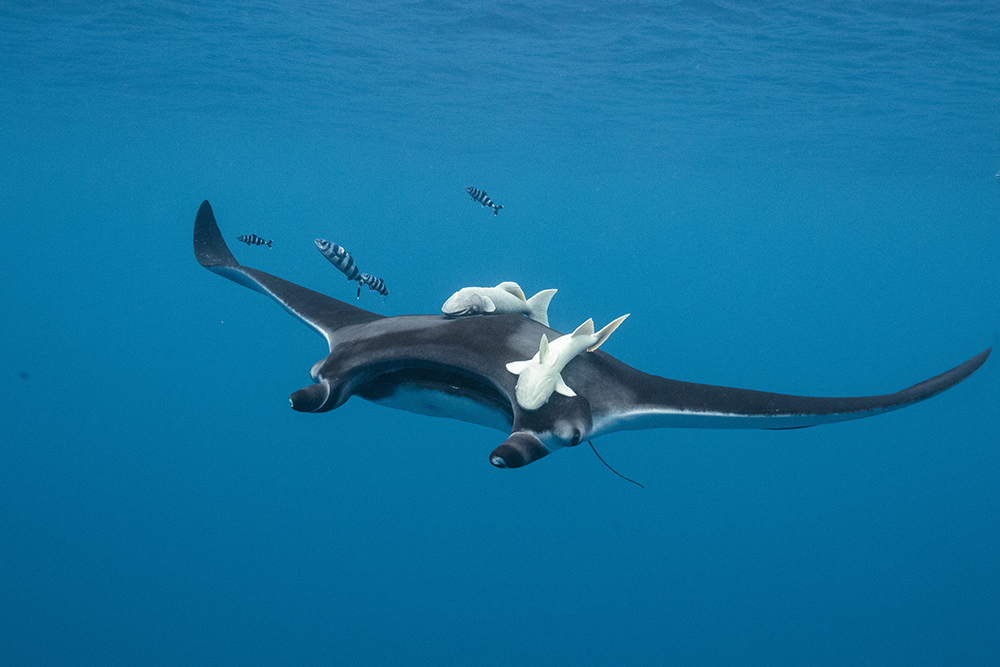 Manta Ray. These ocean giants are renowned for being shy, but this guy was far from it. In fact for almost an hour we swam, circled and summersaulted together. Going by the two remora (sucker fish) he doesn’t like to be alone… All images and footage taken under a special permit granted by the Regiao Autonoma Dos Acores, Secretaria Regional Do Ambiente E Do Mar, Dreccao Regional do Ambiente.