In this interview Chris reflects on his time in the Azores archipelago, searching for the elusive Sperm Whale with Krystle Wright. You can watch their short film here.

What patience do you need for photographing animals?

Wildlife have a way of looking at your plans and laughing at them. You can get frustrated but in a way they’re simply finessing your trip to ensure you truly treasure the encounter that you are finally gifted. After consistent Sperm Whale sightings for weeks, we hit the water and didn’t see a single whale for five days. It was hurting us to know such incredible encounters were going to waste but those quiet days on the ocean actually left me even more intrigued by the social structure of these whales. What event had caused every single sperm whale to disappear from our island and congregate elsewhere? A feeding frenzy? A birth? Or perhaps a death in the family? Whatever it was, the first sighting of the whales after this event saw the most peculiar bonding moments that many locals had never witnessed. Up to 10 sperm whales were swimming in formation and then spending long periods of time gently caressing each other. It really was a moment where you begin to wonder whether their concept of family is even stronger than ours.

But we did have a mission we needed to achieve so when we were finally able to hit the water, we wanted to make the most of every moment. The constant worry was whether each encounter would be our last. This was never more heartbreaking than when my camera was bumped into ‘bulb’ mode for our best encounter of all. So as I hovered over 8 sperm whales rolling around each other, I was only able to shoot long exposures. As devastated as I was, I learned the important lesson that sometimes you should simply put the camera down and enjoy the wonder that lays before your own eyes.

What animals did you encounter during your time, beyond the sperm whales themselves?

The other surprising benefit of not seeing whales for those four days was that we were led into other Azorean animal societies. Dolphins (multiple species), blue sharks, manta rays, turtles and even Portuguese man of war worlds were all unforgettable in their own way. Even the humble cow became dramatic when captured against the sunrise and a towering volcano.

What was your favourite moment from The Azores shoot?

It’s always hard to compare anything to your first sperm whale encounter. After five days of nothing, we had received word that a ‘blow’ had been seen. These blasts of air from the blowhole are often the only indication you get. So naturally we were desperate to get in the water. But these whales were incredibly shy and diving at the first sign of a boat. You have to remember that some of these whales are old enough to remember hunting so it’s probably not a surprise. Anyway, I’d been dropped into the water to swim to where we thought a blow had come from. But there was nothing. Suddenly, with me still in the water, the team saw another blow 200m away so they sped off in that direction leaving me behind. But then, the eeriest thing happened. I began to feel the communication ‘clicks’ of a whale. Thinking I was imagining it, I stuck my head under and they were certainly coming in fast and loud. A few seconds later, through the blue, I saw the most remarkable sight. A 25 metre long sperm whale sped through the water like a submarine, arcing and fixing that big eye on me as he passed. He was clearly as surprised as I was but I managed to capture the moment with an image I’m incredibly proud of. This will stay with me for a lifetime.

Krystle has such an incredible appetite for adventure. She somehow sniffs out a challenge that’s physical and spectacular and immediately you see her spring into action; planning how she can create the ultimate image for the occasion. Her enthusiasm for a concept is infectious so I knew that presenting her with this idea was always going to make for a memorable trip.

Did you learn any new photography skills from working with Krystle?

With Krystle’s passion for adventure sports photography, especially in wide open landscapes with small subjects, I was able to really tap into her amazing use of scale as a tool to bring frames to life. Here, the vast landscape was liquid instead of a mountain range but the same ideas applied… 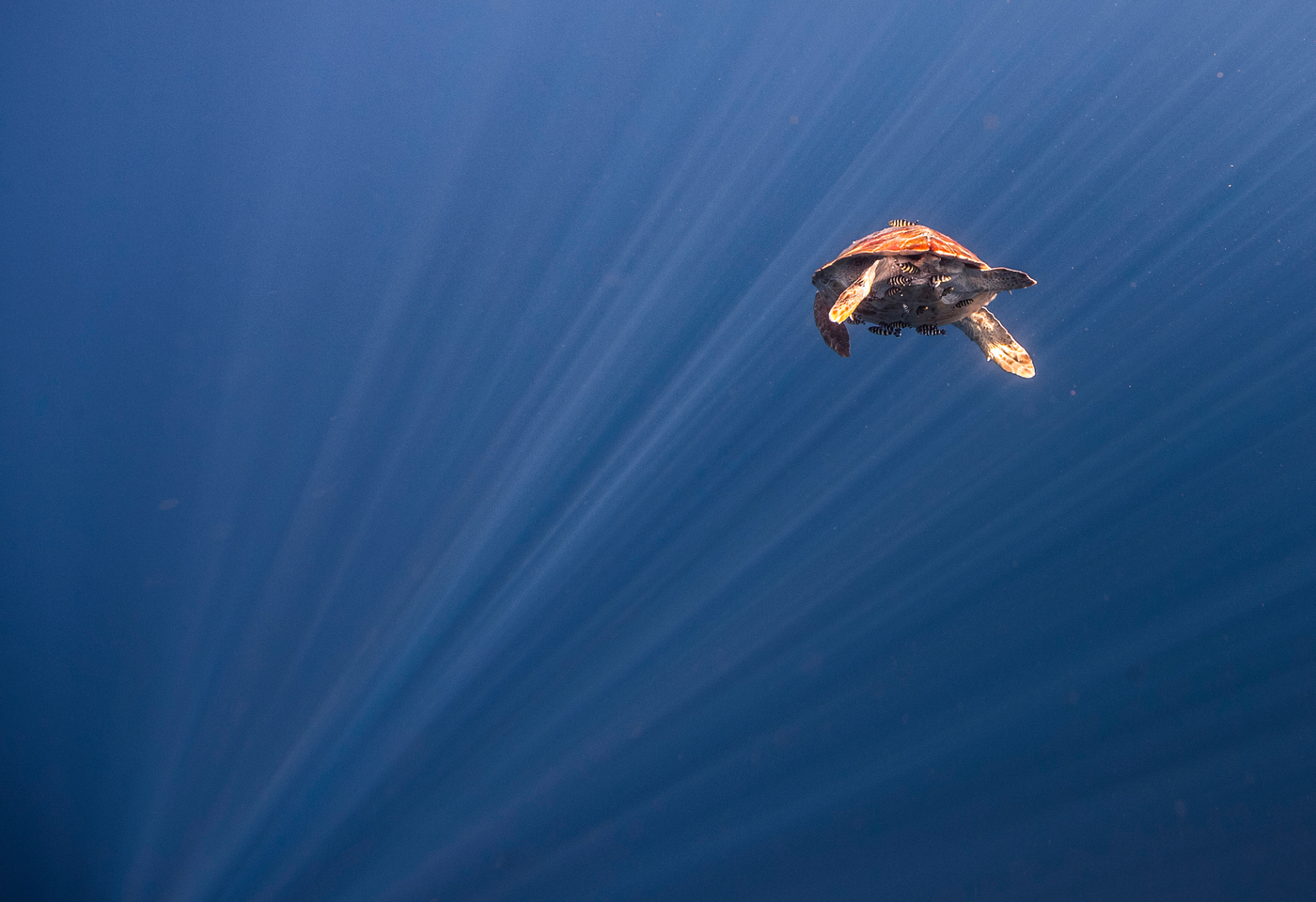 After warming up in the morning sun on the surface, this turtle descends back to the safety of the impossibly clear and deep water of the Atlantic around Pico. The warm currents mean the oceans are rich with life and food for all species. 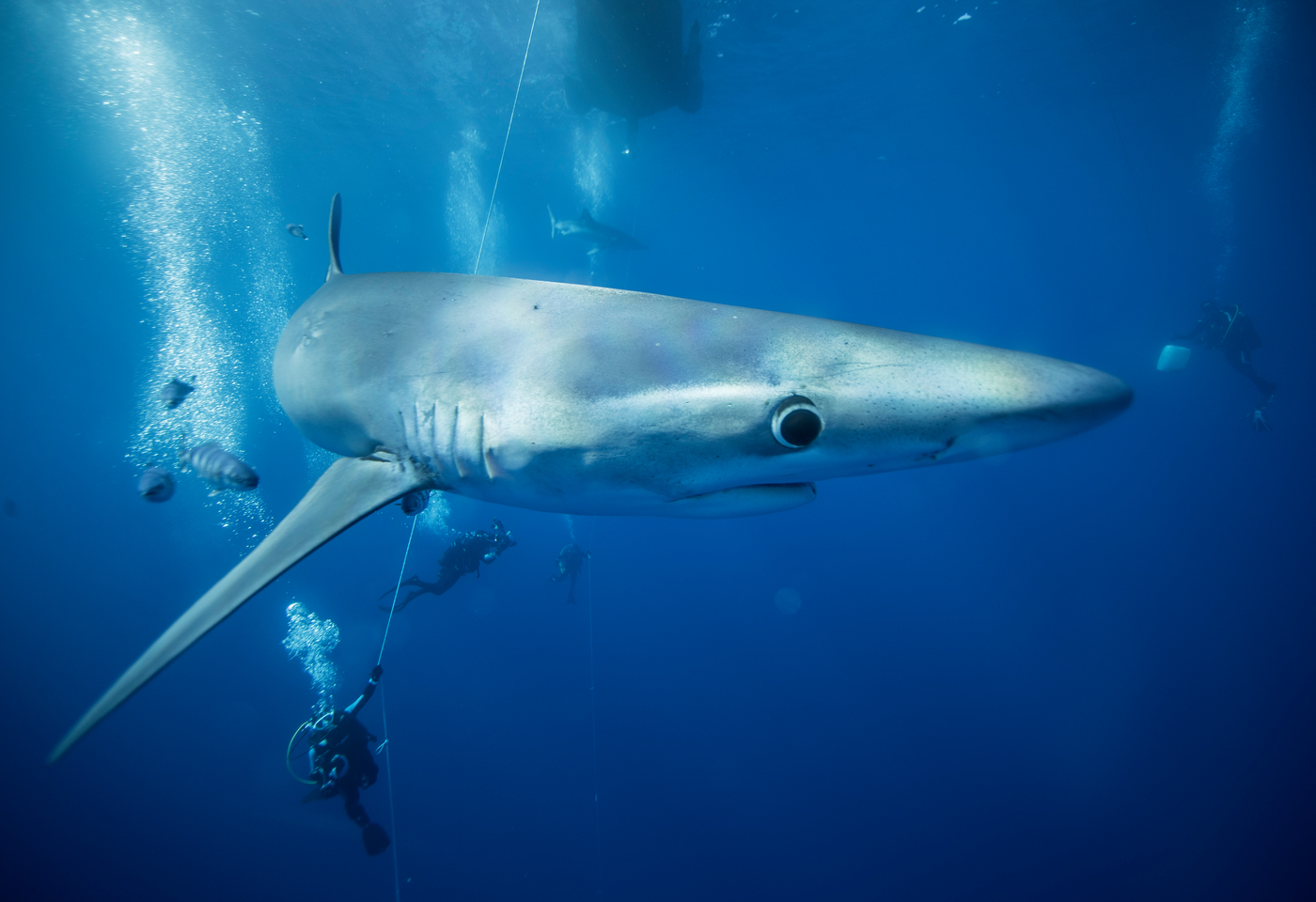 Blue Shark Flyby. These blue sharks school on the northern side of Pico Island. Their big pectoral fins are the giveaway of their placid nature but the deep black eyes and size have you occasionally questioning their intentions. While everyone else scuba dived around them, we freedived in order to get these images. 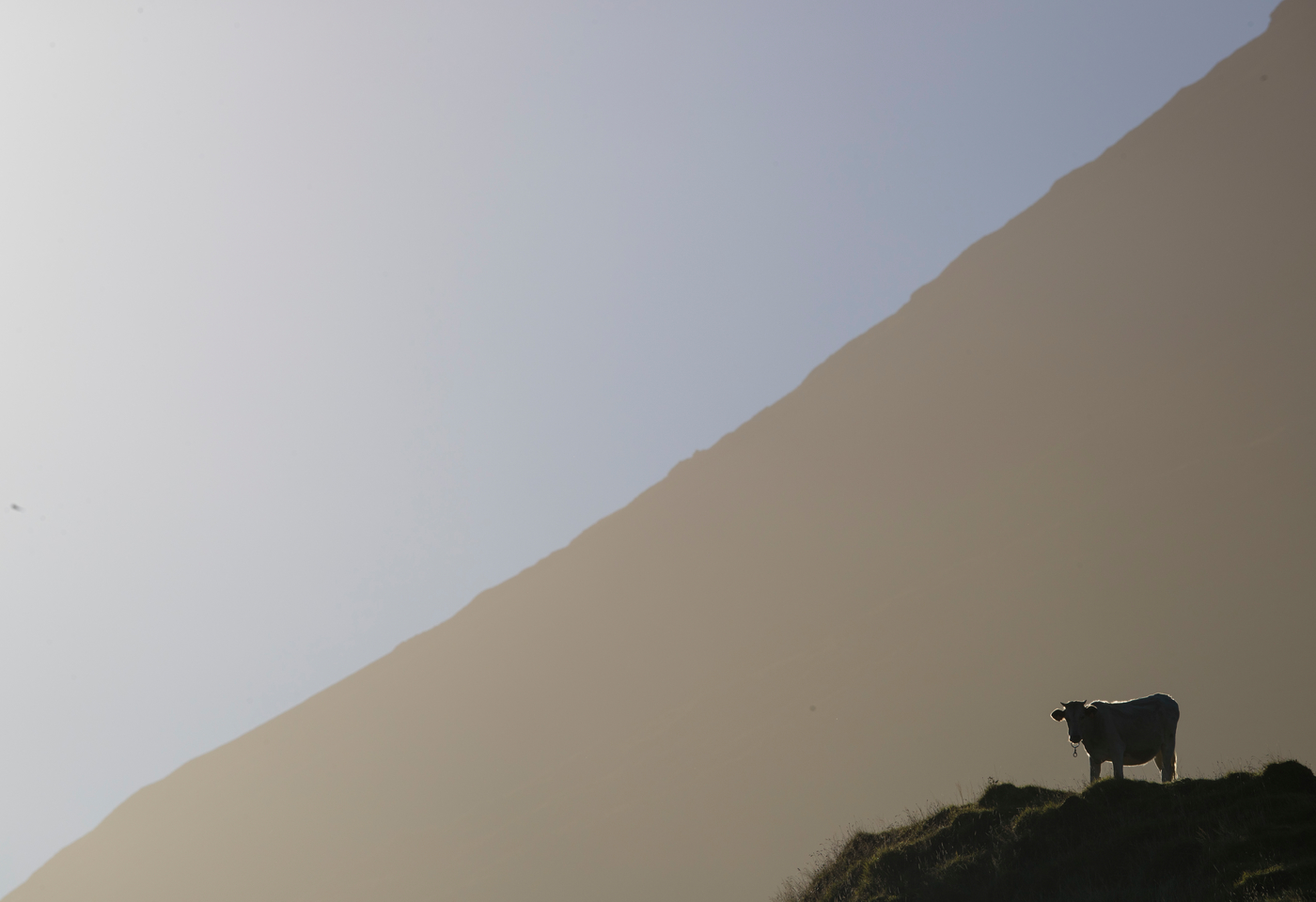 In the early morning mist, this cow chose this moment to take in the beauty of Pico Island. I’m glad she did. The steep face of the volcano, Mt. Pico, dwarfs her in the background… 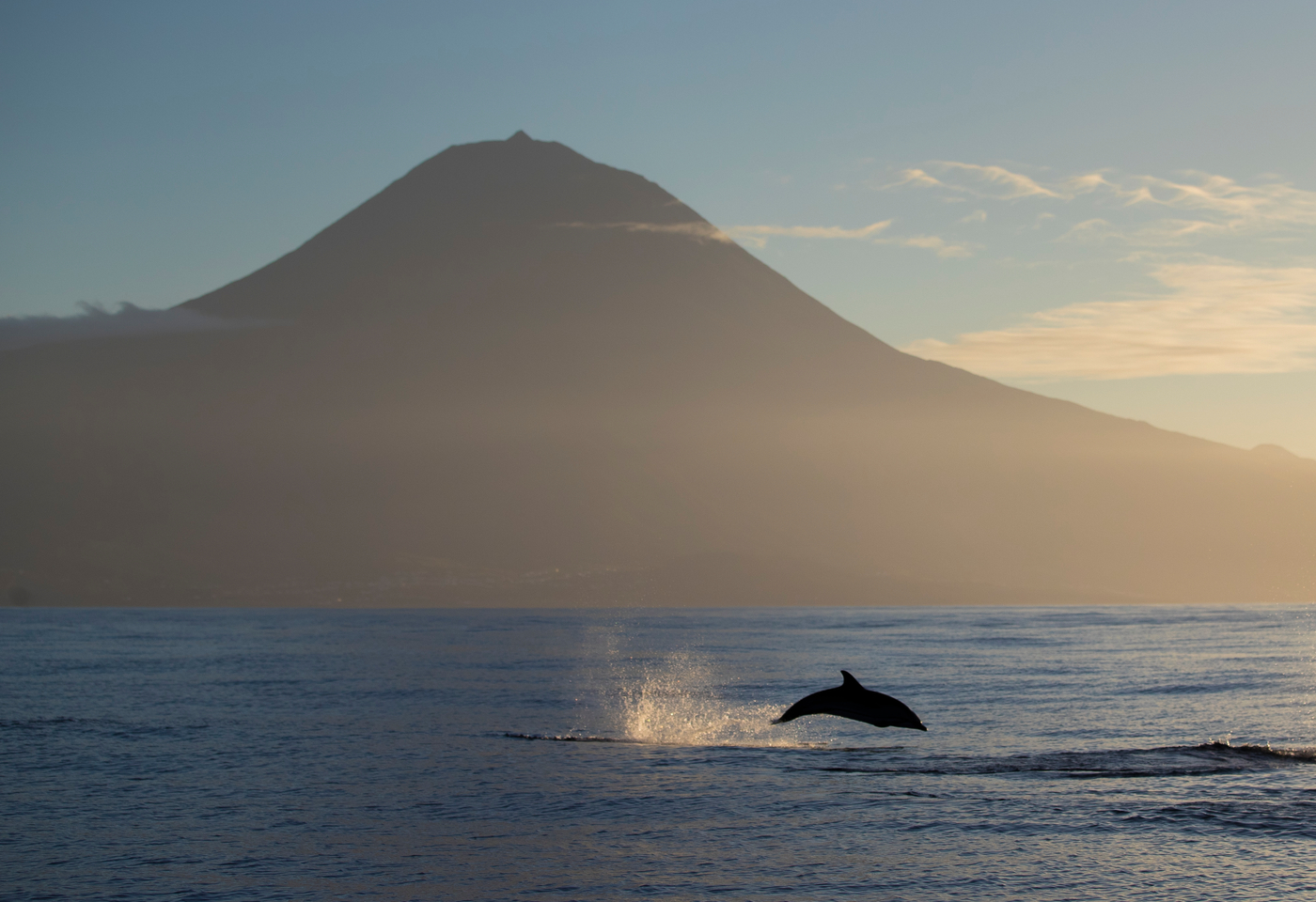 While the ocean was quiet on the whale front, these dolphins seized the opportunity to take centre stage. A super pod of almost 60 dolphins leapt into the morning sun. I patiently waited for this dolphin to frame up the volcano in the background… 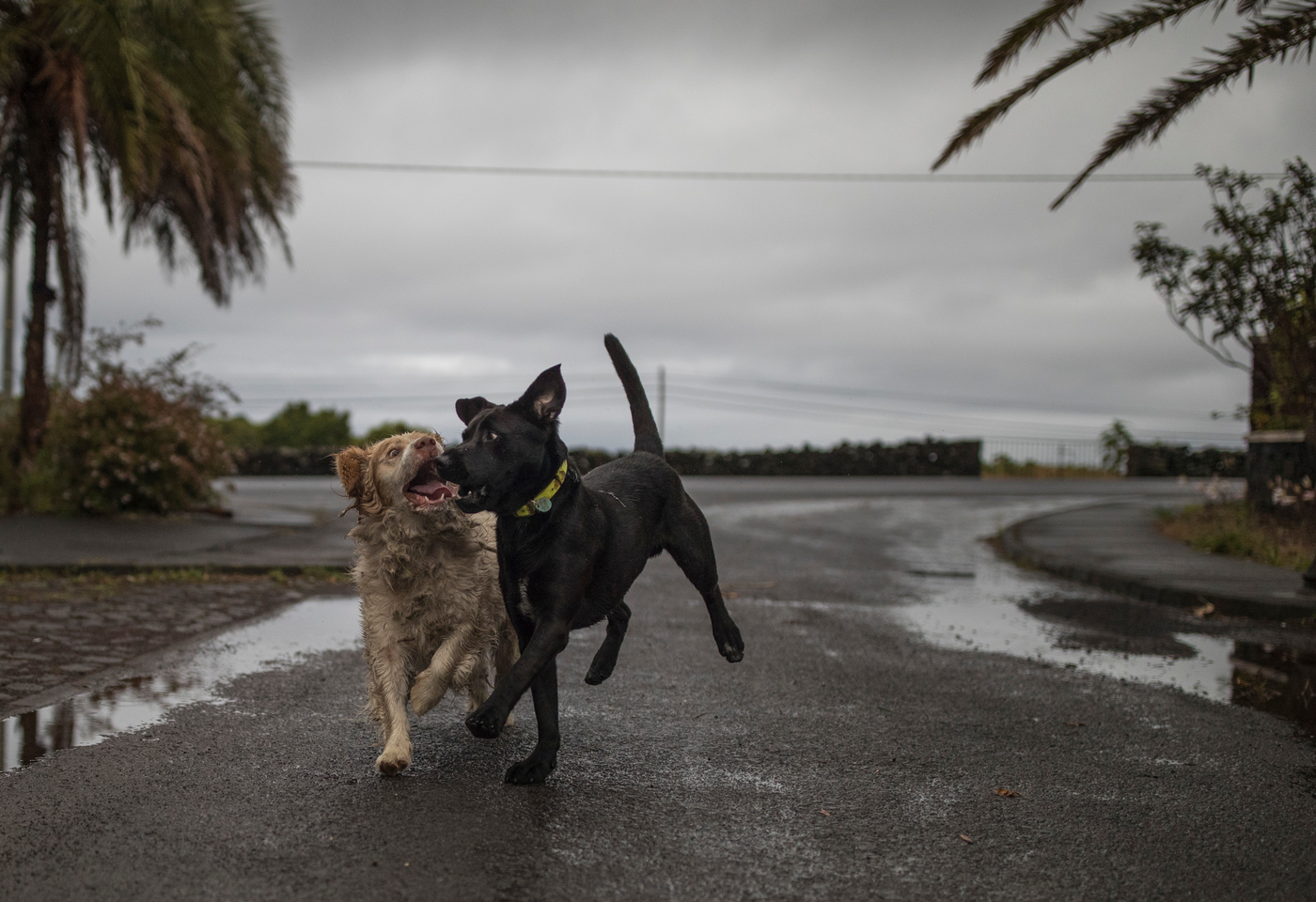 Island life means everyone is reliant on a small group of friends for company…and entertainment. In the morning rain, I watched these two wrestle, fight and play for over an hour. And when they were done, they walked off together. Best friends and enemies…

Sunset beams over Punta Delgado. When a delayed flight prevented me from connecting onto my flight to Pico Island, it was time to make lemonade. I hired a local driver to take me to the roof off this island for the sunset and this was the result. Clouds streak in from the Atlantic over the island and break up this rather dramatic sunset.

All images taken under a special permit granted by the Regiao Autonoma Dos Acores, Secretaria Regional Do Ambiente E Do Mar, Dreccao Regional do Ambiente.